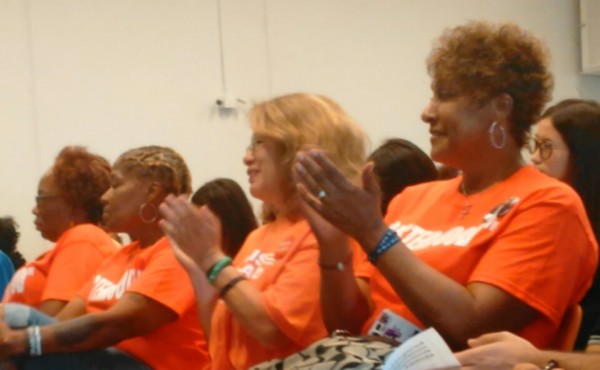 A public town hall Saturday concerning violence and other social ills plaguing Austin and the greater West Side drew more than 200 people.

By the Hand Club, a nonprofit that works with youth, hosted the event, which was meant to spark solutions amid the discussion. Gun violence was a main issue of concern during the three-hour town hall.

But last week’s shooting deaths of five police officers in Dallas by a lone gunman during a protest march against police brutality also came up.

“That is an act that should never happen, not in America or anywhere,” said Cook County Richard Boykin, who convened Saturday’s summit on Chicago’s “Endangered Populations,” namely those on the West and South Sides.

Dallas, Chicago and other cities nationwide have seen massive protests since the shooting deaths last week of two black men by police officers in Louisiana and Minnesota. Both shootings were captured on cell phone video that went viral on social media.

Alton Sterling, 37, was fatally shot July 5th by a police officer during a scuffle outside a Baton Rouge, La., convenience store where he was selling CDs, as two bystanders filmed the shooting.

Philando Castile, 32, was fatally shot July 6th by an officer in St. Paul, Minn., during a traffic stop over a broken tail light; his fiance and her daughter were passengers in the car. The fiance, Diamond Reynolds, streamed video just after the actual shooting live on Facebook.

The shootings and videos sparked days of protests with hundreds of marchers taking to the streets. During weekend protests in Chicago 19 people were arrested, according to the Chicago Sun-Times.

A peaceful march in Dallas July 7th erupted in violence after police say Micah Johnson, 25, shot 11 police officers, killing five, with a high-powered rifle. Johnson, an Afghan war veteran, said before the attack he wanted to kill white officers over the deaths of blacks shot by police, according to several news reports.

Boykin noted the good work of police in Chicago while acknowledging last week’s shooting deaths of the Dallas-area officers. But unjustified police shootings, he insisted, cannot be ignored or overshadowed.

The commissioner stressed the need to hold bad cops accountable, including prosecuting them when appropriate.

Gwen Baxter, whose son was shot to death by a robber in December 2003, urged the community to come together to put an end to gun violence. It was around Christmas when her son, Larry Harper, 22, was shot after leaving a friend’s house where he was helping put up a Christmas tree.

“We just want to put a face on this violence,” said Baxter, who founded Sisterhood, a support and advocacy group of mothers who’ve lost children to gun violence.

Baxter said if the community wants things to change, they need to vote to get the right people in office.

“We’re trying to be part of a solution and collaborate with our officials and organizations,” Baxter said. “The president can’t do it for us, Commissioner Boykin can’t do it alone. We have got to come together.”

South Side Congresswoman Robin Kelly said America is “on the edge” over gun violence. Earlier this month, Kelly and other congressional Democrats held a sit-in on the U.S. House floor to force a vote on gun control legislation by the Republican majority. The effort failed, but Kelly said Democrats plan to keep the pressure on until something gets done.

“We have not voted on one gun violence prevention bill, not one. That shows you how much power is in so few hands,” Kelly said.

Austin Congressman Danny Davis also called for more gun control to keep weapons out of the hands of people who shouldn’t have them, like people suffering from serious mental illness.

Other community concerns were raised at Saturday’s summit.

The South and West sides have seen years of homicide deaths at the hands of police and by blacks themselves, Boykin said.

“We must to set some priorities that we all can get behind,” he said. “For too long, almost 50 years, we’ve had bad policies that have led to people losing their lives. We’ve got to do something about it.”