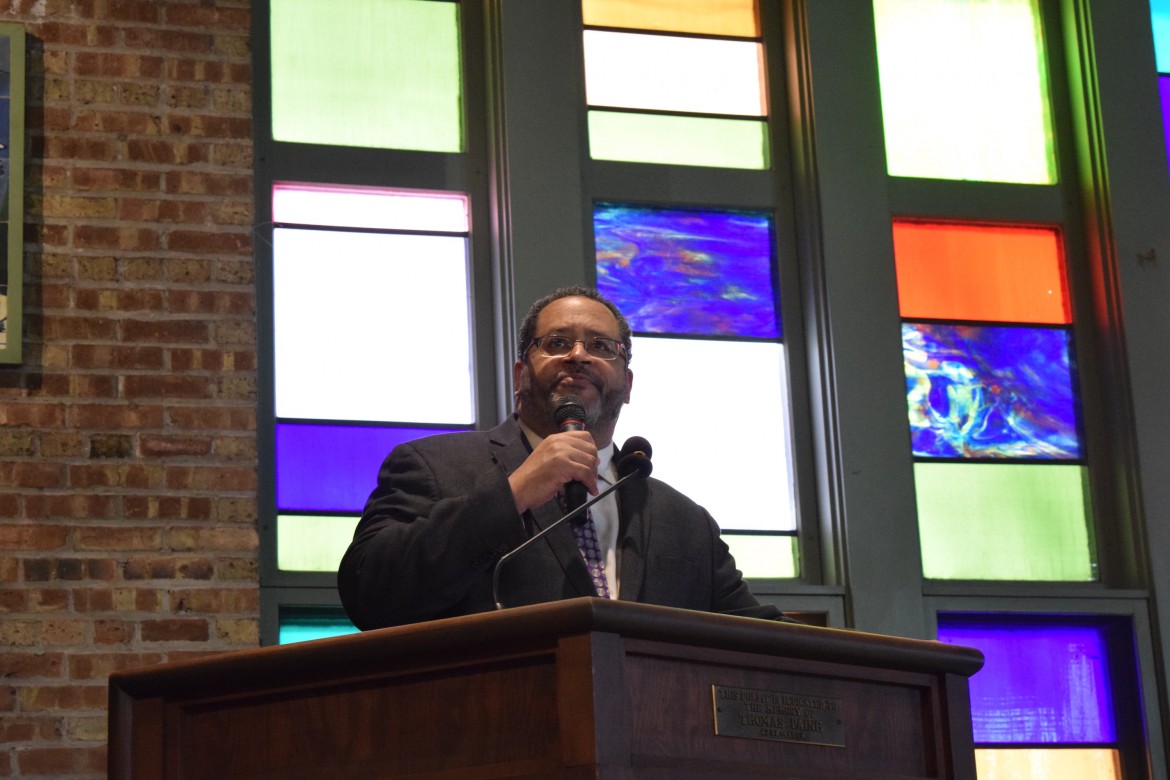 Dyson, who was named by Ebony as one of the 100 most influential black Americans, spoke authoritatively as he gave his critical analysis of President Barack Obama’s leadership.

He said despite what some may believe, America does not live in a post-racial society.

And Obama, he said, has done very little during his two terms as president to correct the racial injustice that plagues the black community and disproportionately reprimands black people more than white people.

“He takes blacks to the woodshed more often than he takes whites,” Dyson said.

While Obama has been hailed by some as a great president, others have called his political decisions and performance into question.

In 2008, Obama gave a speech in which he spoke openly about racial problems and acknowledged the anger in both the black and white communities. He said the way to a “more perfect union” was through working together to be more open toward others and to change old attitudes and beliefs.

Obama’s message of change is what some believe helped him win the presidency, and many hoped would be a focus of his presidency. But Dyson said Obama cast black people aside and has cared more about how he looked in the eyes of those with power than in the eyes of the people who believe in him.

“This beautiful and powerful black man . . . made the choice that he would spend much of his capital trying to convince the Bill O’Reillys of the world, the Mitch McConnells of the world, the John Boehners of the world that he was really basically a good dude, while stepping on the people who believed it already,” he said.

Dyson acknowledged that everything has not been easy for Obama, and he praised the president for his intelligence, saying he will probably be remembered as a great president, a “black Ronald Reagan.”

But Dyson chided Obama on what he sees as an unwillingness to address racial problems in the black community unless he is forced to, like the Emanuel A.M.E. Church massacre in 2015, Trayvon Martin’s shooting and the countless police shootings involving black people across the county.

We live in a culture that detests and kills black bodies, Dyson said. Police brutality and killing of black people has spiked since Obama’s presidency, Dyson observed, a paradox that seems keep black inferiority in place.

Yet Obama, arguably the most powerful man in the world, has not been equally empathetic to his own people, and even criticized the #blacklivesmatter movement while in London earlier this month, Dyson said.

Dyson acknowledged that not everyone agrees with his critique, including some attending his lecture at Third Unitarian Church.

Gino Milton of Chicago’s Beverly community on the South Side, however, did agree with Dyson.

Milton, who’s heard Dyson speak before and read many of the author’s previous books, said Sunday’s lecture was “more than what I thought I was going to get.” The effect of bigotry on Obama’s presidency was the main point Milton took away from Dyson’s talk.

“Just the reality of what President Barack Obama had to deal with in terms of racism, that it even pushed him to the center in terms of being able to relate to blacks as a black man,” Milton said. “But he couldn’t do more than what he did.”

South Sider Cynthia McKelphin expressed gratitude to Dyson for bringing this sensitive topic to greater light. She, too, is an Obama admirer but is also disappointed in his relationship with the black community.

“I have concerns, and he seemed to address a lot of them,” she said of Dyson. “I’ve had strong feelings and admiration for President Obama, but I’ve also felt that there was a side of him that I thought should have been there but wasn’t there.”

Even though America has a black president, this country is not free of racism, Dyson concludes. His criticism of Obama centers around the belief that Obama used his power as president to try and appease white America, while downplaying black people and their needs.

“He [used] the bully pulpit to beat up on us but not to represent us.”

Terry Dean contributed to this story.