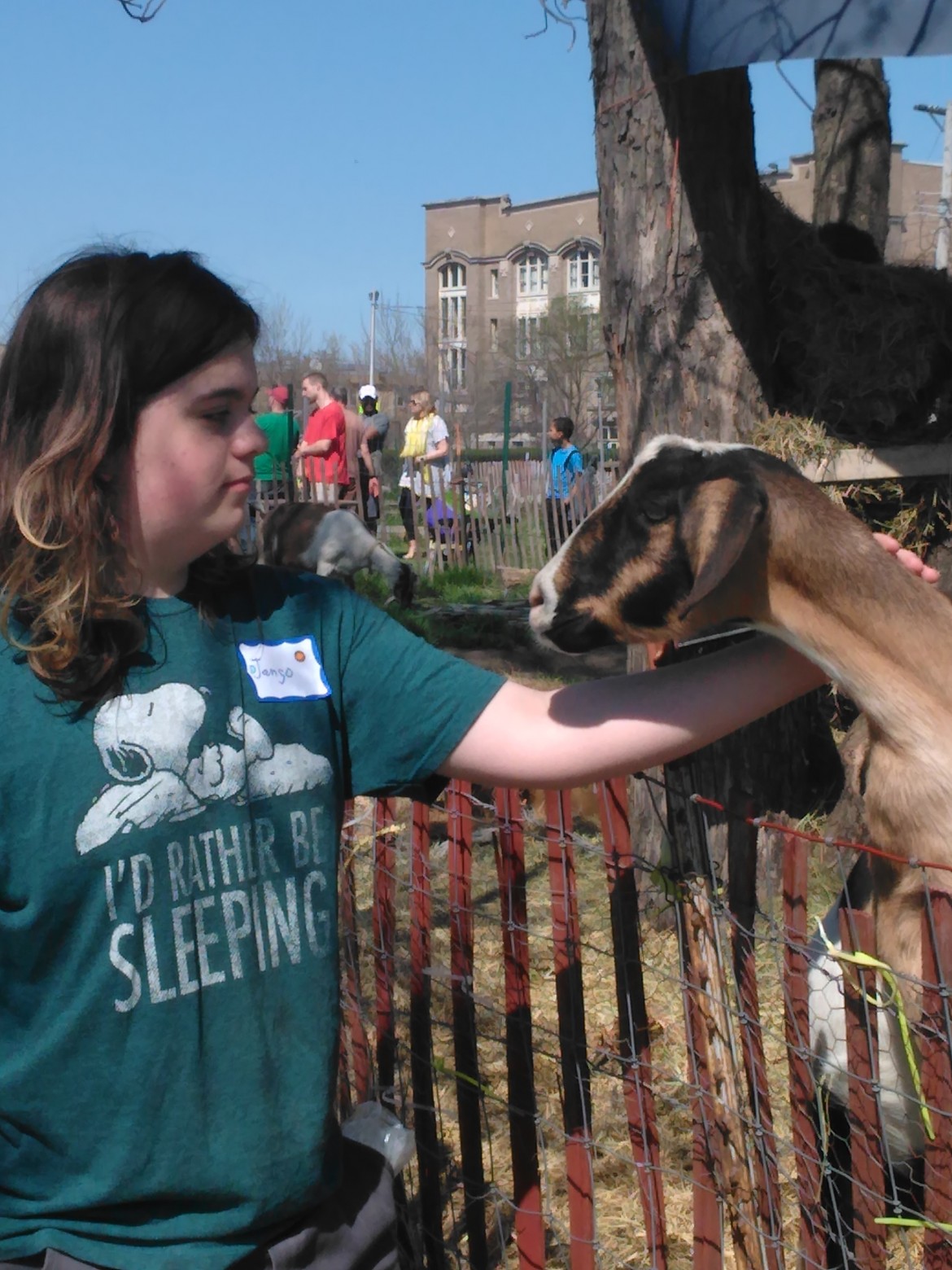 John Rimkunes watched closely as a fellow veterinarian firmly but gently held one of the back legs of a goat whose hoof needed trimming.

It was an eye-opening experience for Rimkunes, who normally works with cats and dogs in his mobile veterinarian clinic out in Orland Park and Tinley Park.

“Seeing these goats is really different,” said Rimkunes, one of the attendees at Saturday’s Goat-A-Palooza” in Austin.

Residents Carolyn and David Ioder, both longtime goat owners in Austin, hosted the event at Root-Riot Harambee, 500 N. Waller. The block-long garden and green space hosted goat owners from around the city who came to learn from veterinarians how to properly care for their animals.

The vets shared grooming and other medical tips about the animals. The festive atmosphere attracted families, including kids who fed, petted and played with a half-dozen goats.

The Ioder’s GlennArt Farm produces and sells goat cheese and milk, among other products. The couple also own a bee farm that’s also located at the sprawling Waller Avenue and Race Avenue garden across from Frederick Douglass Academy High School.

Goat owners, the couple stressed, have to learn how to care for their animals because there are so few veterinarians in Chicago who cater to these animals.

“The objective is to teach goat owners to be independent and to improve the overall health of their animals,” Carolyn Ioder said.

Owning goats in Chicago is not prohibited, though slaughtering them is illegal, according to the city’s Municipal Code.

The Ioders, who also own chickens, said most of their neighbors don’t mind the goats though they’ll get an occasional “nose” compliant concerning bad odors from the animals.

“A lot of people come by and say, ‘This is my catharsis, it’s just so peaceful,'” David Ioder said. “For the most part, people in the neighborhood have been very supportive.”

Even the Ioders learned some new things at Saturday’s Goat-A-Palooza. The animals, for instance, can carry rabies, something Carolyn Ioder said she thought wasn’t true based on what she heard from another vet years ago.

Improper grooming can also be dangerous to the animals.

If their hooves aren’t routinely and properly trimmed, it could affect their ability to walk. Also, an over-abundance of dirt and rot can start collecting in those little nooks and crannies in the hooves.

The veterinarians trimmed several of the goats while their owners and others looked on. The vets used a goat stand, a bench-like contraption with a metal gate attached for the goats to poke their heads through.

“If they don’t get their hooves trimmed, they’re going to start knuckling over,” said Rimkunes, who was impressed by the vets’ work. “It would be like if we humans never trimmed our nails. It would affect our ability to walk and got around.”

Rimkunes, a 20-year veterinarian who attended the event with his wife and children, said he’d like to move the family out to a more rural area and maybe own a couple of goats.

Carolyn Ioder said there are some six to 10 goat owners living in the Chicago area, including one of her friends from Garfield Park who came Saturday. The Ioders own four goats but anticipate six more by this summer as two of their animals are pregnant.

Saturday’s event included a goat knowledge Q&A with the owners and invited veterinarians, who came from the North and Western suburbs.

“They’ve got a reputation for eating everything, but they don’t,” said David Ioder, stressing that goats are actually pretty picky eaters.

That’s a good thing, he added, because it helps regulate their milk. Carrots and popcorn was among the animals’ feast Saturday.

But David Ioder joked, “If you drop it on the ground, they’re like, ‘No way. I don’t know where that’s been.'”

The inaugural Goat-A-Palooza lasted about two hours, with dozens of people coming out. Two more events are planned for the summer, the couple said.

The Ioders are also working to create a membership-based Goat Guild, where members can buy milk and cheese from the urban farmers. They hope to expand into yogurt and gelato, a frozen ice cream-style dessert.