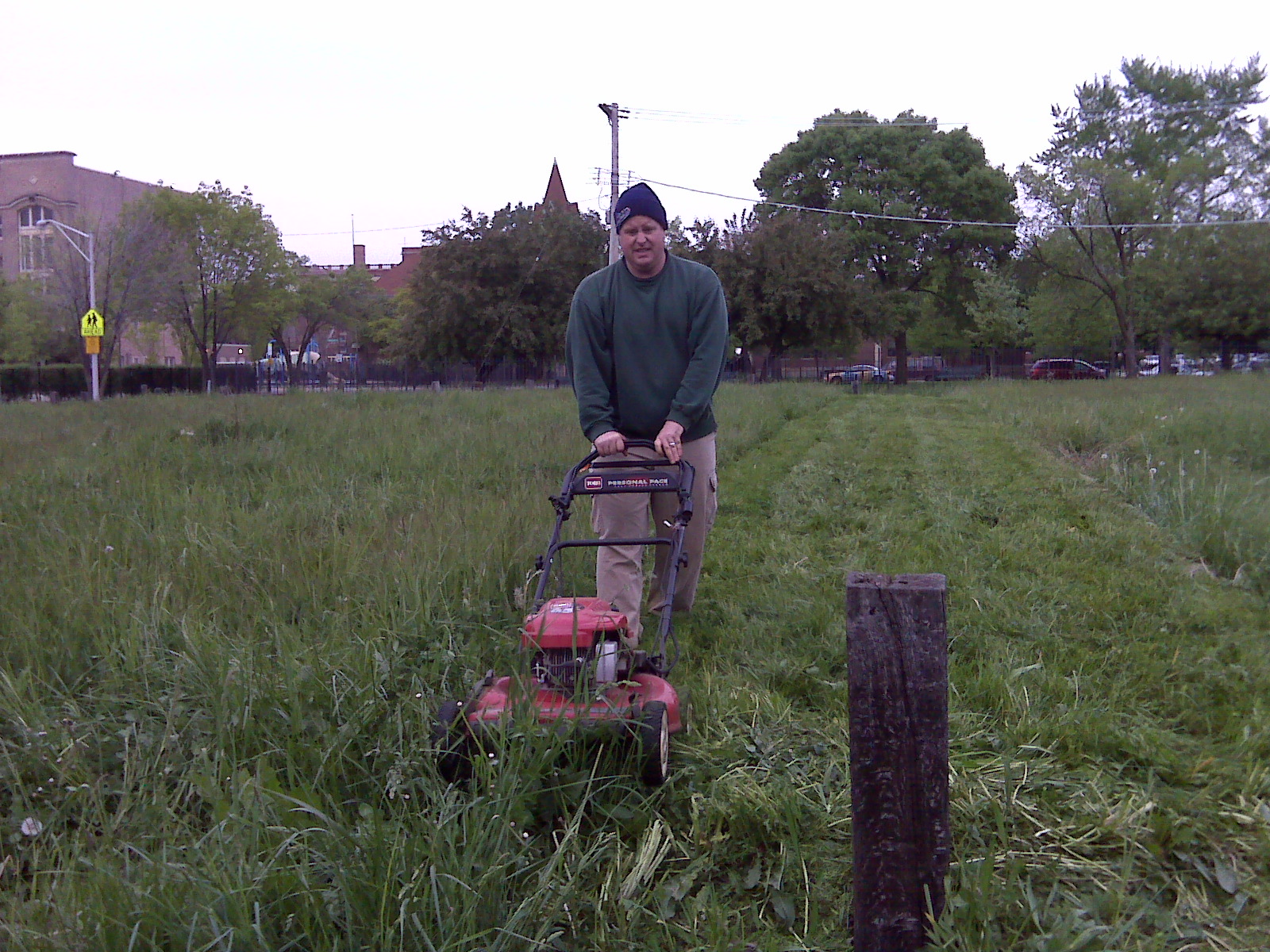 A different kind of green – with a lot of other colors thrown in for good measure – will take root later this spring as a hardy band of Austin residents turn a longtime-vacant lot on North Waller Avenue into an urban garden.

From 2 p.m. until dark on May 16 and 23, the Root Riot Urban Garden Network will build beds and rent plots at the site.

Eleven sections – each the size of a standard sheet of plywood – have been sold with commitments to purchase 10 more, said Seamus Ford, one of the network’s founders. Each rents for $40, which will help pay for launching this location and a sister site at 838 W. Madison St. in Oak Park. Or gardeners can pay $100 for three years. 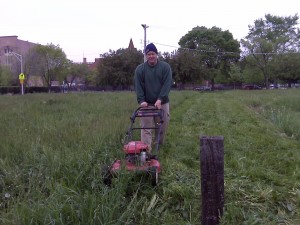 Dean Nickerson mows the overgrown grass in a vacant lot in the 500 block of North WallerAvenue, the site of a new garden. (Photo/Deborah Kadin)

Ford anticipates that as outreach increases and the garden sprouts, participation will grow. That in turn will help jump-start conversations about the value of locally grown food and the importance of building community.

Seeing one vacant lot put to good use will be a welcome site in the neighborhood, said Catherine Jones who has lived in Austin for more than 30 years.

Kathy and Mike Mannweiler, who experienced gardening while growing up, live in an apartment and don’t have their own land. This enterprise makes a lot of sense, Kathy Mannweiler said.

“It’s familiar to me. It’s how I (once) got my food. I’m looking forward to growing enough food that I will can and freeze,” said Kathy Mannweiler, who will plant radishes, carrots, beets, green beans, snap peas and tomatoes. 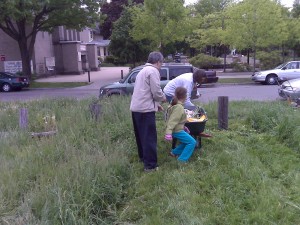 Karen Clapp (in grey sweatshirt), her 8-year-old daughter Miriam and John Hays get the lot ready for the garden. (Photo/Deborah Kadin)

The garden will be a place for students at Frederick Douglass Academy High School to perform community service hours as well as an outlet to learn about healthy eating and how to give back to the community, said Principal Debra Crump.

Vegetables from the garden will be donated to the community, said Cary Bittinger, a youth guidance counselor at Douglass.

“Anything we can do to help contribute to the good of the order and better society, we do,” Crump said.

The talk about building a garden in the neighborhood began last fall after Ford took a course in sustainable agriculture. He wanted to do something with all of that knowledge and thought that the lot, which he had seen several times, would be an ideal location for a garden. 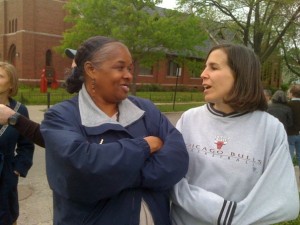 Catherine Jones (left) and Karen Clapp talk May 6 about a garden they're starting. (Photo/Seamus Ford)

An apartment building, which stood on the lot, was razed long ago. The area is at the corner of Race and Waller avenues, about 500 N. Waller Ave. It’s near a fire station, St. Martin’s Episcopal Church, St. John Church of God in Christ, Douglass Academy, the Austin YMCA, a branch of the Chicago Public Library and Austin Town Hall.

Interest grew last fall as residents began learning about the project. Ford said once he learned who owned the lot and that the owner of the lot, a neighbor of his, was willing to let the group use it, the project came together quickly. Ford said the owner wants to remain anonymous.

In addition to renting plots, people can donate money and materials including: