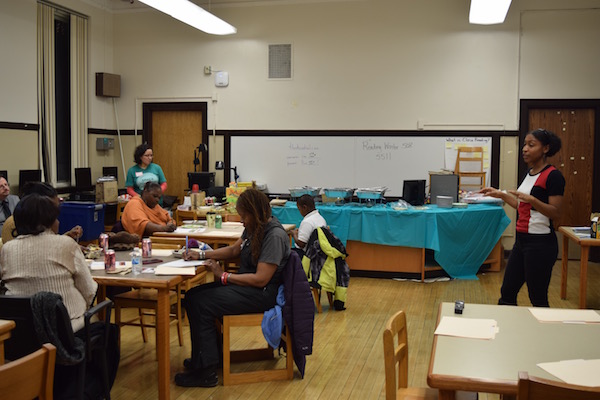 About a dozen Austin residents gathered Thursday at George Leland Elementary to learn some tips and tools on preventing flooding in their homes, an issue that has plagued some West Side households during the warmer months.

“When the rain comes down real hard, I get some [flooding], and that’s too much,” said Earnestine Hemingway, an Austin resident with a passion for gardening.

Heavy rainstorms can cause extensive water damage and flooding, so organizations across Chicago teamed up to help neighborhoods like Austin prepare for the changing winds of spring.

Space to Grow is a partnership led by Openlands and the Healthy Schools Campaign. The program revamps school playgrounds with water permeable surfaces to prevent flooding. The water travels underground into expanded sewer tunnels that lead to reservoirs where water collects until it’s treated.

The homeowners who attended Thursday’s event signed a pledge to receive their water barrels for catching storm water and native plants free of charge.

The plants and water barrels will be distributed May 4 at Leland Elementary. The only obligation: the homeowners must take a selfie when they install their new water barrels and plants, and post it to Twitter with the hashtag #stormwaterselfie.

Funding and leadership for the program comes from the Chicago Public Schools, the Chicago Department of Water Management, and the Metropolitan Water Reclamation District of Greater Chicago.

The three contribute about a half a million dollars each per school, said Jim Yurik, principal civil engineer at the Metropolitan Water Reclamation District.

“There is approximately a million and a half dollars that it costs to do these playgrounds,” Yurik said.

George Leland is one of six schools Space to Grow has upgraded since fall 2014. (AustinTalks reported on the project then.) The school’s new park and play mounds are completely water permeable, and can hold 128,000 gallons of storm water.

The benefits of Space to Grow have gone far beyond capturing rain water because parks that were once unused are now filled with children, Yurik said.

Leland Elementary’s park provides children with a better place to play, and the gardens educate them and their parents about healthy eating and water conservation. It has brought the community together, said Breana Winters, Openlands’ school planning coordinator.

“It makes the school an anchor for the community,” Winters said. “The school is a place where even if you are not affiliated with the school, we can open up this space because you live nearby.”

As spring approaches, Openlands hopes to spend a lot of time outside continuing to build community relationships though numerous planting projects that will provide families with the opportunity to not only prevent flooding but enjoy the outdoors.

“Not only are we capturing storm water, which is what our goal was, but we’re also helping out the kids. Everybody wins,” Yurik said.