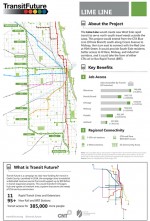 A Chicago nonprofit wants a new public transit rail built, giving West Siders direct access to the North and South sides without having to detour through Downtown.

The Center for Neighborhood Technology is backing the creation of the new West Side rail, dubbed the “Lime Line” by the organization.

The idea for such a connection has been studied by the city since the 1990s, part of the Chicago Transit Authority’s long-term regional transportation plan. Also known as the Mid-City Transitway, the Lime Line is one of 10 new rail lines the center has in its “Transit Future Plan” for the city.

The Lime Line would run from the Jefferson Park station on the North Side to the 95th and Dan Ryan station on the South Side. It would connect to the Blue, Orange, Pink and Red el lines, and also link to two Metra stations along that route. 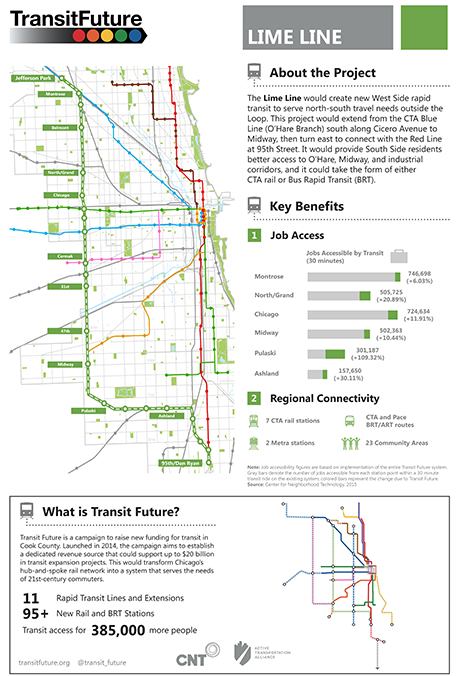 Grimshaw said it will take public, including federal and Cook County dollars, and private funding to get the Lime Line built.

The projected cost: About $20 billion for all 10 lines, the center estimates. About $200 million of that, Grimshaw estimated, needs to be raised at the county level.

Grimshaw said the project could fund itself under the “value added” concept in transportation planning. One line could be built, generating commercial development along the route and creating additional tax revenue, she said.

The center’s transit future plan was not included in the county’s proposed budget. Grimshaw said her group is talking with county officials about reallocating existing money in the budget to fund their project. Rasing more money from residents, Grimshaw added, is unlikely.

“It’s kind of hard for the county to come and say, ‘Here’s a new tax, especially after raising the sales tax in July,” Grimshaw said.

County County Commissioner Richard Boykin (1st) said he supports the Lime Line for the West Side, saying it can better connect residents to jobs in other parts of the city. Boykin said money from the federal government and the city, as well as county and private funding, is needed for the project.

The transit plan could be added as an amendment to the current budget, Boykin and Grimshaw said. The commissioner said he’d have no problem sponsoring that but would need to see a final plan first.

“It’s not a question of support, but how do you pay for it? You will need commitments from the county, state, city and federal governments. You don’t want the county to pay for this on its own,” Boykin said, adding that county residents are weary of any additional tax increases. “People don’t mind paying for services, but they’re just taxed out right now.”

The Lime Line has support among West Side residents, Grimshaw added, with about 150 letters from West Siders in support gathered by her organization.