The violence in Chicago has attracted the attention of the nation – and local residents. It’s hard not to think or talk about the crime that continues to plague the West and South sides.

And rather than shy away from the discussion, one group of Austin students decided to take an active part by creating a mural at their school.

The “Interrupt the Violence, Not Our Future” mural was officially unveiled recently at Spencer Elementary Technology Academy, 214 N. Lavergne Ave.

The group of students, who range from 5 to 13 years old, began work on the mural July 6, following a deadly Fourth of July weekend in Chicago that saw 10 people killed, including 7-year-old Amari Brown.

“I didn’t want to tell them what we were doing; I wanted them to make their own choices about the mural,” said Spencer art teacher Shannon Miller. “But we sort of discussed what happened over the weekend, and that’s when we collectively decided what the theme would be.”

The students watched the documentary “The Interrupters,” then used that as an inspiration for the 15-foot- by-18-foot mural, Miller said. 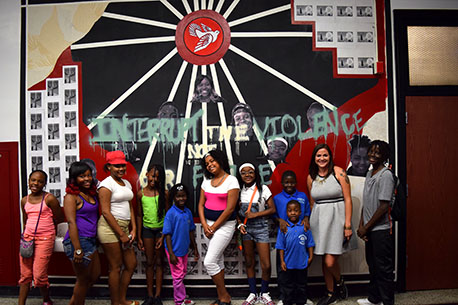 The open discussion allowed the students a chance to talk about their emotions and feelings, she said.

“It was really interesting to see some of my older kids, especially, take initiative to say how they felt and how they wanted people to feel when they saw the artwork,” Miller said.

However, Miller said it was hard for her to understand the students’ perspective and personal experiences with violence, and equally difficult to get them to understand that the violence in Chicago isn’t normal.

“It’s not normal to know somebody, or more than one person, who has been shot and killed,” Miller said.

“They think I’m lying that I don’t know anybody who’s been shot and killed personally. So, I think the hardest part is just getting them to understand that this isn’t normal, and their voices and opinions do matter.”

The mural features a red sun with a dove in the middle. Rays spoke out from the sun, connecting to photo portraits of the students and the words “Interrupt the Violence, Not Our Future” written in green spray paint.

The inspiration for the design came from Shepard Fairey, made famous from his Obama “Hope” campaign posters, and the new favorite artist of 8th grader Diamond Potts.

“I hope people will think: ‘Wow, those kids . . . want us to change our behavior, so our kids could grow up to actually have a good life,’” Diamond said about the message she hopes people will get from the mural.

Miller said she hopes people stop and take a minute to think about the choices they make and that the mural can be used as a starting point for an ongoing discussion about the issues students face.

“So often people escalate and go from zero to 100,” Miller said.

“They’re angry over really nothing, something that is not a big issue. And, as a result, other people are getting killed or injured or being hurt over these things. So my goal and my hope is that when people see the mural, they’ll understand that their choices affect other people.”

The mural was funded through a grant by Chicago Public Schools, Miller said.

A video documentary featuring the students and their process of creating the mural can be found here.