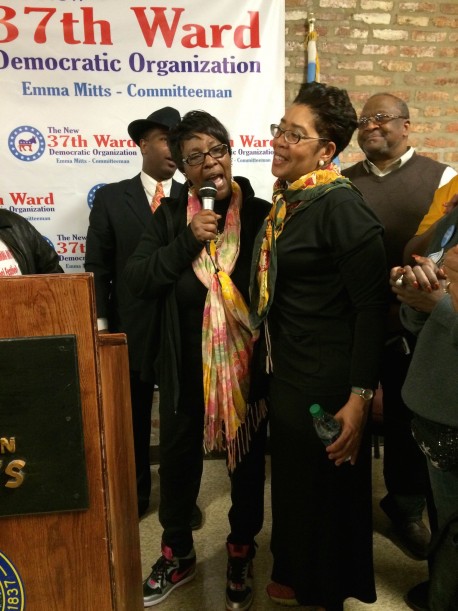 Ald. Emma Mitts (37th) locked down four more years on the Chicago City Council Tuesday as her challenger refused to make the traditional phone call to congratulate the winner.

Candidate Tara Stamps’ refusal to officially concede marked a bitter end to the first runoff Mitts faced in her 15 years as a West Side alderman.

Out of nearly 10,000 votes cast, the alderman won reelection with 52.7 percent of the vote (5,211), according to unofficial results from the Chicago Board of Election Commissioners. Stamps, a CPS teacher, captured 47.3 percent (4,675).

More voters turned out for the April 7 runoff than in any of the three elections Mitts ran in since then-Mayor Richard M. Daley appointed her to the council in 2000.

Not long after the polls closed Tuesday night, Stamps told her campaign supporters she would not be making a concession speech.

“If anybody’s waiting on me to call Emma and say, ‘Well, it was a good fight,’ you got me twisted,” Stamps said, causing the crowd to cheer.

A Stamps spokeswoman did not return messages later Tuesday night to confirm whether the candidate called the alderman after all 41 precincts had been counted – a traditional election gesture. Mitts had not received a call by 10:30 p.m. but said her challenger may have called another line in the office.

It was a hard-fought six weeks for both candidates, and the tension between the two was apparent. Mitts told AustinTalks she had always felt disrespected by Stamps, while Stamps accused her taking actions that hurt the black community.

After the final votes had been tallied, a beaming, sweaty Mitts told her supporters she never worried about losing. But she doesn’t like races — they keep her from doing her job, she said.

Some of that heat came after she made anti-gay and anti-union remarks.

During a March 21st candidates forum, the alderman was caught on video asking why gay couples should get the same tax benefits as a heterosexual pair.

She later apologized in a Sun-Times story – blaming her comments on being raised in rural Arkansas, then issued a statement saying she’s not against gay rights. During the March 24th AustinTalks/Austin Weekly News debate, the alderman stated she had never supported gay rights in her professional and personal life, but as a lawmaker, if “the law supports gay rights, so will I.”

Mitts angered union members in and outside her ward at her first election party Feb. 24 when she told supporters if “union folks” didn’t know where to go once she won, they should “get the hell out of the 37th Ward.”

The alderman later asserted she was not anti-union when interviewed by AustinTalks. She said she was simply frustrated with the Chicago Teachers Union, which she believes treats her poorly because she supports charter schools.

The CTU pumped about $57,000 into Stamps’ campaign; she also received about $72,000 from the healthcare branch of the Service Employees International Union. 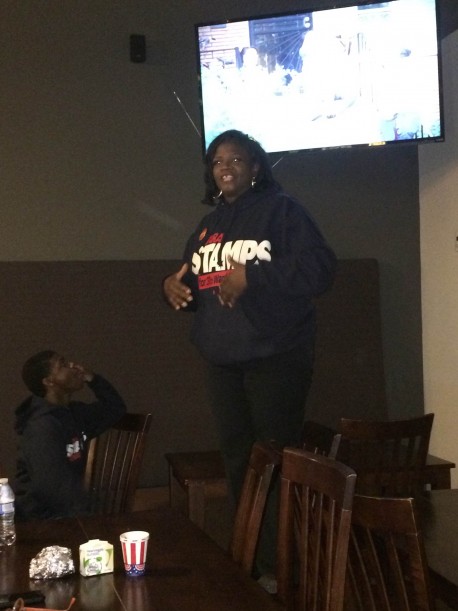 Stamps said she’d return to teaching if she lost. The 46-year-old has taught fifth grade at Jenner Academy of the Arts since 2004.

Tuesday night, she called the runoff election not “a moment, but a movement” for change. Throughout the campaign, Stamps pledged transparency if elected, charging the alderman with ignoring her constituents and being a mayoral puppet.

“People who didn’t know my name opened their doors to me . . . came to my office and said, ‘Well, my auntie don’t agree, but we gon’ put your sign in the yard,’” Stamps said.

The alderman said she felt she really grew up in the ward and wanted to thank the voters who believed in her.

“I may not be the normal politician who’s fussin’ and arguing and talking loud, but I just believe in everything I do,” Mitts told her supporters Tuesday night.

The alderman’s first act will be to meet with local community groups and discuss the “state of the ward,” or what the ward needs, she told AustinTalks.

“Where do we want to take the ward? What is the vision? We’re looking for one vision,” Mitts said.

During the campaign, she pledged to open a youth center if re-elected. When asked about that Tuesday night, the alderman said she’d already discussed it with the mayor.

“(Emanuel) said he would help me with that,” Mitts said.

But on Tuesday night, Mitts was ready to rest.

“You know, you know, Jesus worked, but he rested, too,” she told her crowd with a laugh.