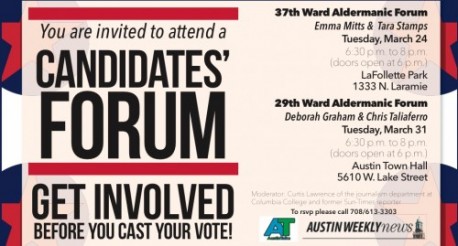 More than 800 people voted in the 29th and 37th Wards the first two days of early voting, which started Monday, March 23.

In the 29th Ward – where Ald. Deborah Graham and police Sgt. Chris Taliaferro are running – 426 people voted, according to a ward-by-ward comparison conducted by Aldertrack.

Early voting continues through April 4 at 51 locations throughout the city – one in each ward, plus the downtown Chicago Board of Election Commissioners office. Chicagoans may vote at any of the sites.

Here are the West Side sites:

It’s not too late to email austintalks.org@gmail.com the questions you want the 29th Ward candidates to answer during their March 31 debate, sponsored by AustinTalks and the Austin Weekly News. Hope to see you next Tuesday night at Austin Town Hall.