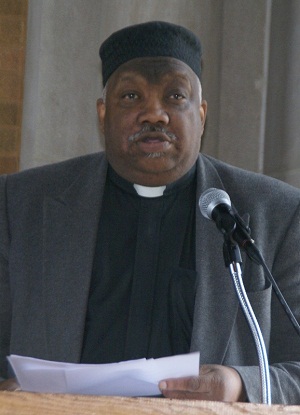 Hundreds of people packed in to the Pleasant Ridge Missionary Baptist Church in Austin on Saturday to remember the life, and mourn the death of Rev. Lewis Flowers, 62.

Flowers was the pastor of Austin Community Ministries and the chairman of the Westside Ministers Coalition. He died Dec. 9 after a brief illness. His work as a defender of the West Side earned him the nickname “mayor of the West Side.”

The Rev. Ira Acree of Greater St. John Bible Church, 1256 N. Waller, who was among the mourners at his funeral on Saturday, called Flowers “a tireless advocate for the West Side.” While other pastors and community leaders would kowtow to authority, Acree said Flowers did not mind insisting to the mayor’s office or anyone else that Austin get its fair shake.

Flowers was “a voice for the voiceless,” said Acree.

“He was a true prophet for our time,” said Acree, who choked up when talking about Flowers. “He was fearless, he didn’t mind speaking truth to power. He was an advocate for the inclusion of the West Side in everything. He wasn’t about his church or his friends.

“He knew the West Side had been often the forgotten part of the city, so he would be at the table or with the bully pulpit demanding that the West Side got a fair amount of jobs.”

It was a standing-room-only crowd at Pleasant Ridge, 116 S. Central Ave.

Preckwinkle and Ford both gave speeches about Flowers’ legacy. And both remembered working with him as an important voice for the West Side.

Graham talked with AustinTalks partner, the Austin Weekly News, about her decades working with Flowers on behalf of the West Side.

Flowers worked as a community leader in Austin for more than 30 years and a had a history of working to bring jobs, housing and better health care to the West Side.

Acree said it was this work that brought so many busy politicians to the Austin church on Saturday.

“All of these people who are very busy and have large districts to tend to, spent two hours out of their day honoring Rev. Flowers,” said Acree.

Athena Williams, who worked with Flowers at the Westside Ministers Coalition, said she thought Ford’s speech in particular was one of the most rousing of the morning.

“I didn’t know if he was a politician or a preacher,” she said.

Williams, who is on the coalition’s board, said the group would be meeting after the holidays to discuss how the 30-year-old organization will move forward without Flowers’ leadership.

“It will be hard,” Williams said. “A lot of us depended on just a conversation with him every morning. He was a very important, spiritual person.”

Acree, who has known Flowers since he was 8, said the reverend had been a role model and an “inspiration” to him and the entire younger generation of West Side religious leaders. He said Flowers had been a “godfather figure” to him and often would stand up for him when debates with other leaders would get testy.

“His voice will be missed,” Acree said. “I will miss just being able to reach him by phone. Now I have to hang up knowing he’s in another city, he’s in another place we call ‘no more.’ No more tears, no more crying, no more dying, no more heartaches. He is resting from his labor.”