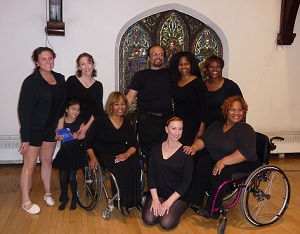 Eighty people from ages 4 to 85 attended St. Martin Episcopal Church’s Embrace the Space last weekend that featured the mixed-abilities dance company Dance>Detour in the performance and movement workshop “So You Think You Can’t Dance.”

Dance>Detour demonstrated the belief there’s quality in all types of movement, and anyone can dance regardless of age or physical ability. The dancers got audience members up and moving. Everyone, including those who used walkers, canes, wheelchairs, leg braces as well as those with visual disabilities participated in the fun.

“This was one of the best workshops we have had the honor to present,” Alana Hodges Wallace, founder and artistic director said in a press release.

“The staff and audience were amazing! Thank you for including Dance>Detour in this series,” she said.

The April 29 dance workshop was the third in a series of events co-hosted by St. Martin’s Episcopal Church and Bodies of Work with funding from The Chicago Community Trust’s Artistic and Cultural Diversity Initiative. Bodies of Work, a network for disability arts and culture, is housed in the Department of  Disability and Human Development at the University of Illinois at Chicago. 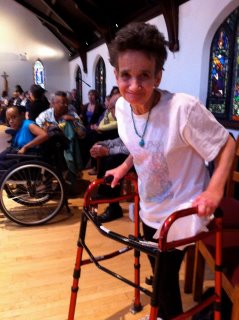 The Initiative was created by the trust to showcase the talents of diverse and culturally specific artists in venues located in areas of Cook County not traditionally served by arts and cultural programming. Bodies of Work hopes to build on its collaboration with St. Martin’s to maintain a presence in the Austin community and create meaningful programs to present in the neighborhood.

“I felt humbled by the gratitude we felt as performers. In fact, I felt the line was wonderfully blurred between audience and the company – we all felt like one on Sunday,” dancer Melissa L. Sallée said in the release.

Mixed-abilities dance companies combine the talents of dancers with and without disabilities to create unique dance forms and new ways of moving. The workshop attracted people from the Austin area, as well as other neighborhoods in and around Chicago. 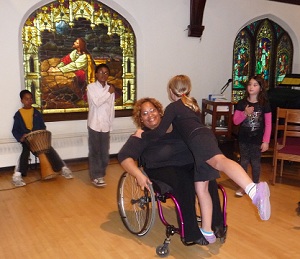 Dancer Mia Coulter shows the young ones how it's done.

Participants watched exciting Dance>Detour performances, took part in warm-up exercises, and created and performed routines of their own.

“Sunday’s ‘So you think you can’t dance’ program was phenomenal! I nearly wept from pleasure at the performance. And the interaction with the audience was so much fun,” audience member Ellen Janiec said in the release.

The Embrace the Space series closes Sunday, May 20 with Carrie Sandahl presenting “Images of Disability in Films for Kids,” a screening of film clips and an interactive guided discussion with the audience of how Hollywood portrays people with disability in children’s films. Admission is free. The event is wheelchair accessible, sign language interpreted and audio described, and all are welcome.

For Embrace the Space program information, disability accommodations or to RSVP, call 312 996-1967, or email tpacio1@uic.edu.