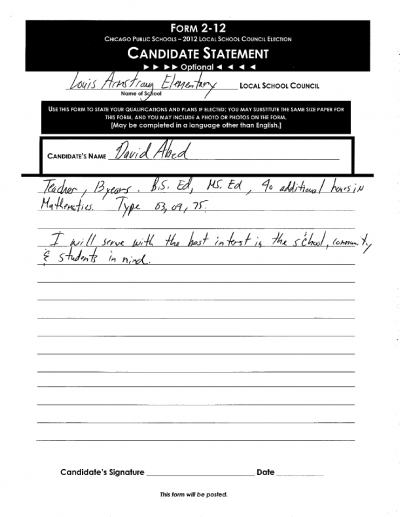 Ten people are running for a local school council seat at Louis Armstrong Elementary School – one candidate shy of the 11 needed to fill the council.

Each candidate is expected to win a seat in the no-contest race, and one seat for a community member will be left vacant.

Armstrong, a grade 3-6 school with just more than 130 students located at 5345 W. Congress Pkwy., will hold its local school council elections Wednesday. On that day public elementary schools across Chicago will hold elections for the six parents, two community members, two teachers, and one non-teaching staff member that will create their governing boards. High schools hold their elections Thursday.

Citywide, some 6,500 candidates will seek a local school council seat this week, making this the largest municipal election in the country and the one that chooses the largest number of elected officials of color, according to the education advocacy group PURE.

However, candidates’ interest in the election was slow to catch on. The sign-up deadline was originally March 8, but with just more than 2,000 candidates signed on by that date – and with pressure from a coalition of more than two dozen organizations — CPS extended the deadline by two weeks. (By comparison, more than 17,000 candidates ran for the office in 1989.)

While many schools are preparing for hotly contested elections, others – such as Armstrong Elementary – won’t have enough candidates to fill their councils.

Sharon Jones, a current Armstrong local school council member, is the only community member seeking a seat at the school. This would leave one vacancy on the board, which may be filled by appointment.

Jill Wohl, a board member at the education advocacy group Raise Your Hand, said local school councils often have difficulty filling the two seats set aside for non-parent community members. This lack of community engagement can be problematic, Wohl said.

“Communities are always very much in touch with what they have and what they need,” she said. “No change will be sustaining without involving community.”

Berry, a current Armstrong council member, also holds a seat on George Leland Elementary School’s local school council. A longtime community volunteer, she is a member of the Columbus Park Advisory Council and is president of the Congress Parkway Block Club, according to her optional candidate statement. She said she also attends CAPS meetings regularly.

Norwood wrote in her statement that she is new to the Austin community, having moved from the Oak Park School District. Her background as a teacher’s assistant and nursing assistant will help her on the council, she wrote.

“There are a lot of good children here and all they need is attention,” Norwood wrote. “I think that I can give them that, and I think this is a great school.”

Two teachers, David Abed and Nicole Shere, are seeking spots. Abed has taught for 13 years and holds a master’s degree with additional training in math.

“I will serve with the best interest in the school, community and students in mind,” Abed wrote in his statement.

Jesse Rooks, a security guard at Louis Armstrong who was elected to the local school council last year, is seeking a seat designated for a non-teaching staff member.

West Side education advocate Dwayne Truss urged members of the community to take part in this week’s election, noting that local school councils have control over schools’ budgets and will play a significant role in deciding how to handle the longer school day next year.

Elections will he held at elementary schools on Wednesday from 6 a.m. to 7 p.m. Voters must bring two forms of ID, at least one of which must have a current address within the school’s attendance boundaries. (For more details, view pages 23 and 24 of the Local School Council Election Guide.) 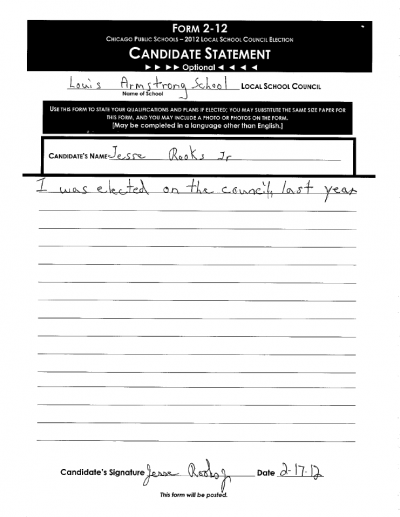 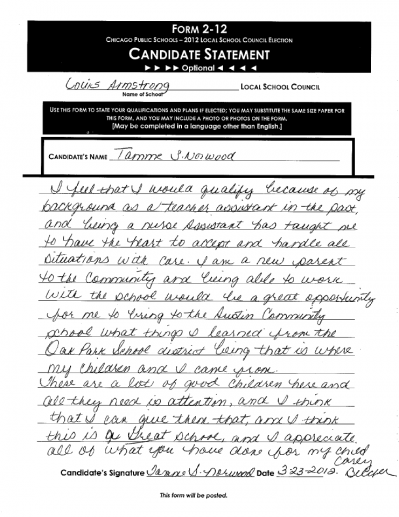 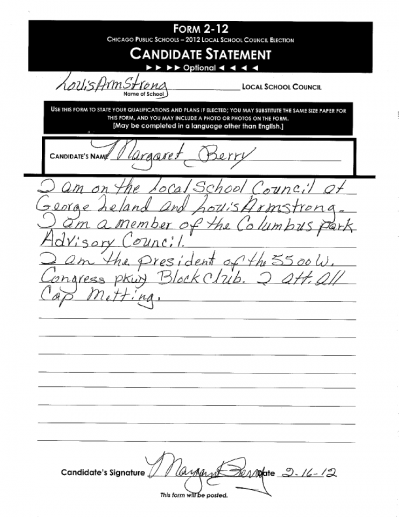