The leadership ceremony at the school, located at 5608 W. Washington Blvd., is a celebration where each of the 8th grader outfits a 7th grader with a green tie representing their new responsibilities as a school leader. The school’s 58 8th graders and 55 7th graders participated in the ceremony. 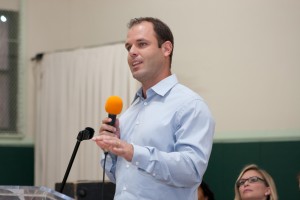 The gesture is the 8th grader’s promise to guide and support the 7th grader throughout the school year, as well as to carry the characteristics of a leader to high school – and beyond.

“Eighth graders, you must rise to the call of leadership, and the younger generation needs to choose to find a positive example to follow,” Musso said. “I see this ceremony as part celebration but also a challenge.”

Two students from each grade also spoke at the Sept. 12 event. 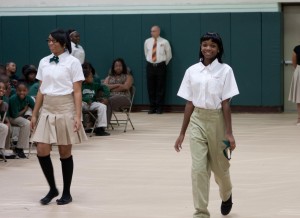 But being a leader isn’t always easy, because it takes self-discipline, said 8th grader Christopher Smith.

“When someone says, ‘Hey, you want to go play some basketball,’ you have to have the will power to say ‘no’ because you have homework to do,” Smith said.

Musso joked with the students when he took the podium. He thanked them for showing up in their green and white uniforms – his Jets colors – causing the junior high students, as well as family members in the audience,  to erupt in laughter and cheers. 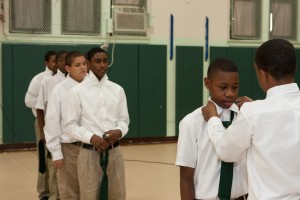 Musso said he misses playing sports and being around a group of men on a mission.

“When I was sitting here listening to you (students) cheer for the speakers that came up, it just occurred to me that this is a place that is on a mission,” he said.

“You students are on a mission to achieve something.” 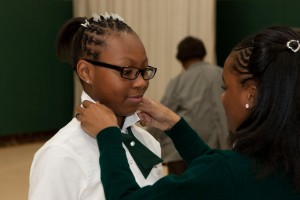 “If you go into sports, don’t forget you have to be educated, so when you come out you can form your own company and become the millionaire that you want to be,” Morgan said.

Musso told the students to always have a future destination. 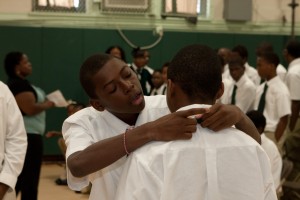 “You have to wake up every day dead set on inching a little closer to your dreams. If you’re not moving toward your dreams, you are just a daydreamer – just someone standing there,” he said.

“Whatever you dream about … do it to the best of your ability.”