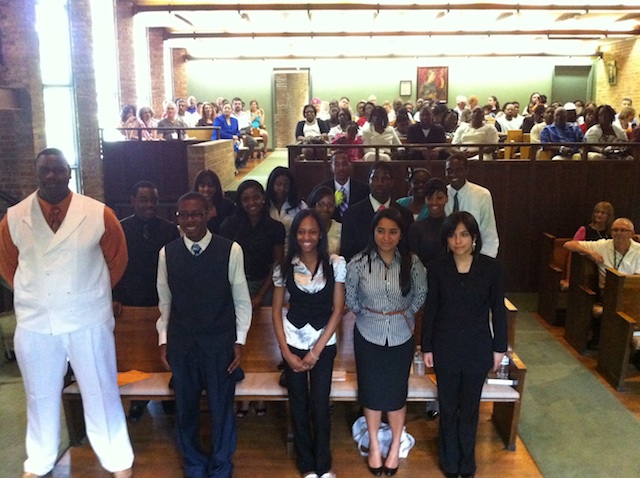 Phylistene Ward looked on in pride Sunday as 15 college-bound students from the West Side received scholarships from Third Unitarian Church.

Thirty-seven years ago Ward was the first recipient of what has become an annual tradition for the Austin church, which has helped hundreds of students attend college. This year, Third Unitarian awarded a total of $15,000 during its “Scholarship Service.”

Roberta Wilson, a long-time member of Third Unitarian Church and founder of the scholarship program, said she’s grateful church members have been so supportive over the years.

“I think it’s a good group of kids,” said Wilson. “I like working with the kids.”

Wilson, who marched with Dr. Martin Luther King, hopes each of this year’s winners will graduate from college. Though she doesn’t have a degree herself, Wilson is proud of what she calls her PhD in Streetology. The message of Sunday’s service was clear: never give up. Speakers pointed to U.S. Supreme Court Justice Sonia Sotomayor and former South African President Nelson Mandela, extolling the students to pursue their dreams just as they did.

Edward Ward (no relation to Phylistene Ward) will study political science, law and public speaking at DePaul University this fall. He said he will continue to heed the “never give up” message because that’s something he has followed his whole life.

“I have a very supportive mother. I see the struggle that she has been taken through as a mother,” said Ward, who attended Orr Academy. “I realize that if I’m on the streets and not in school, I’m only going to drive her into a further depression.”

Datrese Hearn, who plans to attend Western Illinois University to study political science and journalism, said she wants to give back to the community as soon as she can. Hearn, who attended Marshall High School, has dreams of opening a homeless shelter for teens in Austin.

“I never knew you could get rewarded for helping out in the community,” said Hearn. “I’ve been helping out since my freshman year.”

Hearn is the second of nine children to go to college, and she hopes her five younger siblings go, too.

The Third Unitarian Church collects donations for the annual scholarships during its services over the year, as does Unity Temple in Oak Park and Winnetka Congregational Church.

When the first scholarships were given out nearly four decades ago, Phylistene Ward and another student shared in $500.

Click here to see some of Sunday’s scholarship service.