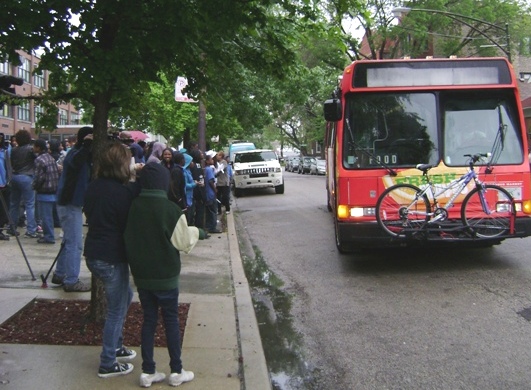 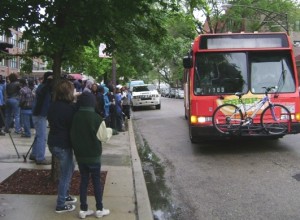 Spencer Principal Shawn Jackson was on hand Thursday to greet the bus with Ald. Jason Erwin. Cameras rolled as a happy crowd greeted the Fresh Moves bus, followed by lines of children filing through the bus and emerging with bananas, apples and oranges.

“We talk about health care and staying healthy,” Jackson said, “but awareness and resources are two different things. Fresh Moves has the resources: healthy produce. So we couldn’t pass it up when it came to our neighborhood. We want to model the behavior we want to see in our students.

“I hope they will get excited, go home and tell their parents about the items they were able to purchase. Instead of always saying, ‘I want money for a Happy Meal,’ they will say, ‘I want some money for the Fresh Moves bus.’” 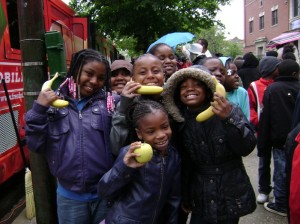 After a 2006 report by Mari Gallagher identified Chicago neighborhoods without fresh produce grocers, Food Desert Action found that trying to build its own store would be too expensive. Instead, the group opted to team with Goodcity to start a nonprofit, donor-supported program that provides a market on wheels.

Using a variety of census and health statistics, Gallagher calculated that more people tended to be overweight and prone to diabetes in neighborhoods with a lopsided proportion of fast food outlets vs. full-service grocery stores. She coined the term “food deserts” to describe Austin and several other Chicago neighborhoods, mainly on the South and West Sides.

Customers enter the front door of the former CTA bus, which was donated to Food Desert Action for $1, to pick out produce from shelves on both sides, then pay at a counter by the back door as they leave. The bus is climate controlled, but Thursday’s cool rainy weather kept the produce fresh. 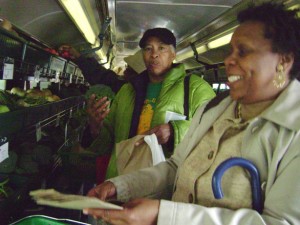 Local School Council member Carol Johnson, who lives around the corner and whose two children are Spencer alumni, took home a bag full of groceries: “It’s great they’re doing this.”

But how do you get kids to eat vegetables?

Indeed, Chef Monica and the Tasteful Manners program were showing upper-grade students how to eat “salad on a stick,” a shish kebab combination of Colby cheese, spinach, cucumbers and pineapple. Tasty Manners sets the table twice a week after school with kindergarten through third graders, teaching them to shop, cut, mix, cook and eat the vegetables together. The meal is where the manners come in.

“We see kids come to school with Flamin’ Hots and soda pop all the time,” said Tasty Manners instructor Valerie Matthews. “My grandparents in the South grew their own food. And dinnertime was at the table. That was family time. We need to get back to that.” 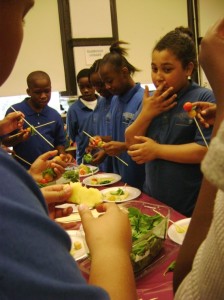 “Kids won’t eat salad if you serve it on a plate, but put it on a stick and make it fun. It’s best to start when they’re young,” Matthews said. To convince skeptical seventh and eighth graders, she’s thinking about having them study the health effects of chemicals used in junk food.

Principal Jackson isn’t above using a little bribery on the resistant early teenagers. For Fresh Moves opening day, he had a long white limousine parked in front of the school. “If you buy something in the food bus, you get to have your picture taken in the limousine,” he said. “Whatever works!”

Fresh Moves project director Dara Cooper said, “As I got older and more privileged in society, I got access to more foods. Now I’ve been all over the world and found foods I’m in love with that I’d never heard of before, like purple asparagus, which is beautiful, juicy and doesn’t get tough. Why can’t everyone have this opportunity?”

She says the bus provides a combination of conventionally grown produce, plus some organic and some locally grown with limited pesticides. Certain plants – celery, peaches and strawberries, for instance – retain more pesticides, so it’s better to buy organic. Others are enclosed in a skin or outer leaves, like cabbages, pineapples and mangoes, which keeps most pesticides out. 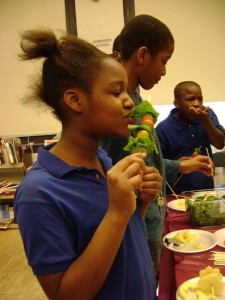 The occasional bus stops are just a start. Fresh Moves hopes to add weekend stops in Austin and North Lawndale, the two neighborhoods Fresh Moves will be working in first. And the bus may be powered by recycled vegetable oil, thanks to a joint project with the Whitney High School biodiesel club, which won a major award, said Cooper and Pinzino.

A bus full of groceries won’t turn a food desert into an oasis overnight. But it’s a start.