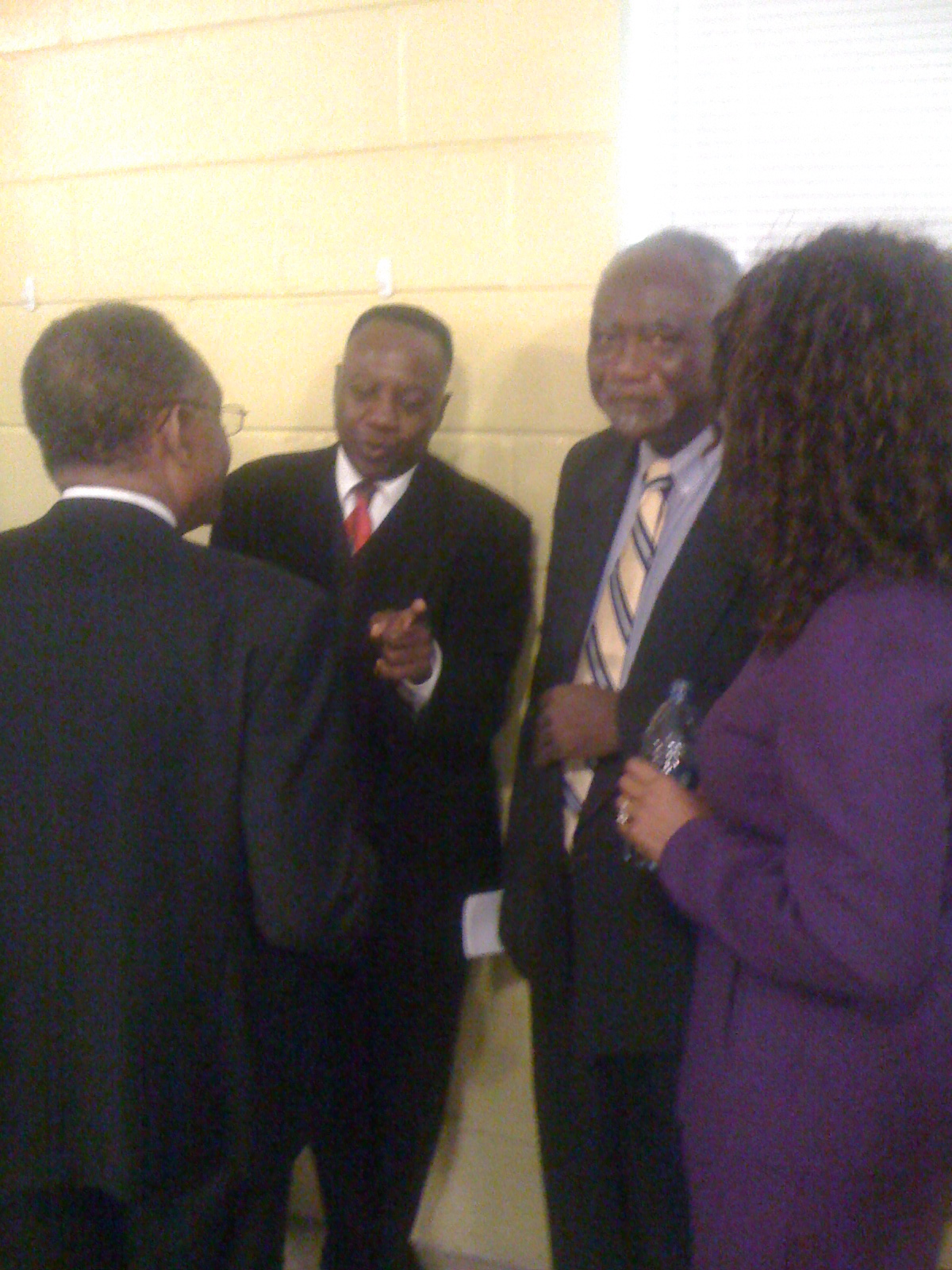 A coalition of politicians and community leaders hopes to announce a consensus black candidate on Tuesday for the upcoming Chicago mayoral race, and to help make that decision, the group held a candidates forum Saturday.

Eleven black candidates attended the forum, held at Bethel AME Church on the city’s South Side, to make their pitches to the hundreds of people who packed the church’s auditorium. While the event aimed to unite the black community, it also highlighted the behind-the-scenes challenges of finding a consensus candidate and emerging problems with the selection process. Since Mayor Richard Daley announced last month he would not seek an unprecedented seventh term, the Chicago City Council’s Black Caucus has held numerous private meetings and interviewed both declared and potential mayoral candidates. Caucus chairman  27th Ward Ald. Walter Burnett says the Chicago Coalition for Mayor, which sponsored the candidates forum, is an effort by the caucus to include other organizations into the decision-making process.

“What we found is that several organizations throughout the city of Chicago and the African-American community had been meeting on their own,” Burnett says, adding that the coalition includes churches, business leaders, lawyers, civil rights organizations and “the hip-hop generation — some of the new, young people who are rising up in our community [and who] can move thousands of young people just with a rap song.”

Though it’s not clear who exactly is a member of the Chicago Coalition for Mayor, the move to include more organizations and power bases gives the city council’s black caucus more ammunition in convincing black candidates to step down if they’re not chosen to be the consensus candidate, but that’s assuming the coalition won’t fall apart in the process.

“I wouldn’t want to be a candidate who doesn’t have the support of a coalition like this one,” Burnett said. “If we keep this coalition together [and] if we get behind a candidate, we can push a candidate across the finish line.”

Saturday’s candidates forum showed some of the strains already within the Chicago Coalition for Mayor as it tackles specific issues — namely how to handle the media. To help organize the forum, the Chicago Coalition for Mayor retained the services of Danielle Ashley Communications, a public-relations firm that has worked for Cook County Circuit Court Clerk Dorothy Brown.

Darlene Washington, who works for the firm, told AustinTalks the day before the forum that members of the media would be able to attend. But just before Saturday’s event got started, community organizer Eddie Reed announced from the pulpit that the forum could not be recorded or videotaped, though one video of the event has already made its way to YouTube.

A few minutes later, Reed asked members of the media to raise their hands — though few, if any, did — and then said the public forum would be closed to the media even though press passes had been printed for reporters and cameramen to wear.

After some negotiation, cameramen and photographers were allowed to get a couple of shots of the candidates, who were lined up in front of the pulpit. Afterwards, members of the media were escorted to side room where candidates answered questions after their speeches.

According to one alderman at the event, some coalition members met in a “broom closet” minutes before the forum and decided to close the event to the media. Burnett later met with reporters in the side room and told them a majority of the coalition’s members voted to keep the media out.

“That’s what they voted on and that’s how we’re moving, because we’re trying to stay together, and it has been working,” he said.

But it’s not clear how exactly the coalition works.

Tracey Alston, the president of Danielle Ashley Communications, told AustinTalks the coalition invited “all the mayoral candidates” to the forum, but retired colonel Tony Daggett says he heard about forum through “word of mouth.”

As photographers and cameramen took their shots of the candidates standing before the pulpit, Daggett could be seen off to the side arguing with some of the event’s organizers, who Daggett said were trying to prevent him from standing with the other candidates. Daggett was eventually included, but he questions the transparency of the coalition.

“It’s very helter skelter. It’s very arbitrary,” Daggett told me. “If we’re looking for a unity candidate, I think we need to be open.”

The day before the forum, Darlene Washington of Danielle Ashley Communications told AustinTalks — after checking with her colleagues — that white and Hispanic candidates would also be attending the forum. Burnett said the coalition decided not to include those candidates, including former White House chief of staff Rahm Emanuel, Second Ward Ald. Bob Fioretti, City Clerk Miguel del Valle and City Colleges of Chicago Board Chairman Gery Chico.

Burnett was unable to answer why the Chicago Coalition for Mayor decided not to invite those candidates because an employee with Danielle Ashley Communications interrupted the interview and escorted Burnett out of the side room reserved for the media.

The coalition’s decision didn’t prevent one white candidate from showing up. Fredrick White, a driver for the Chicago Department of Streets and Sanitation, stood outside the church and gathered petition signatures along with volunteers from other mayoral campaigns.

“They told me it was for African-American candidates only, even though I was invited by Doc Walls,” White said.

White had picked up at least one sympathizer in black draftsman Arthur Brint. The two had been talking about anything from the power of the Internet in political campaigns to job fairs hosted by gubernatorial candidate Scott Lee Cohen.

“If he wins,” Brint said, pointing to White, “then they’re all going to be sucking up to him.”

Oddly enough, there was another Fred White standing outside the church. This White, a black accountant and Third Ward resident, said he wasn’t sure if there could even be a consensus candidate.

“If God wants a consensus candidate, you’ll get it,” White said.

It’s also not clear how the Chicago Coalition for Mayor will choose the consensus candidate.

Before the forum began, Danielle Ashley President Tracey Alston said a survey would be given to everyone at the event asking for his or her top three choices for mayor. She said the surveys would be collected, and the person with the most votes would be declared the consensus candidate. But after the forum ended, Alston said the coalition would meet on Monday to decide who will be the consensus candidate. She said the coalition’s decision would be announced on Tuesday.

A copy of the candidate survey included a list of criteria, like trustworthiness, “greatest potential for winning — both Black and White votes” — and “high visibility/name recognition.” The survey also asks if there should be an elected Chicago Board of Education, should aldermen in specific wards be re-elected and will the person surveyed vote for a black mayoral candidate.

Both Burnett and 28th Ward Ald. Ed Smith said finding a consensus candidate who can appeal to other ethnic groups is a big concern for the coalition.

“We don’t want this to be portrayed as the black candidate,” Smith said. “This will be a candidate who will represent all of Chicago.”

While most of the candidates who spoke at Saturday’s forum said they were optimistic the Chicago Coalition for Mayor will be able to declare a consensus candidate, some expressed reservations with the selection process.

State Sen. Hendon said he thought it was odd how the first three candidates to speak were all from the West Side even though the lineup had supposedly been drawn at random. Hendon wouldn’t say if he would drop out of the race if another candidate were chosen as the consensus candidate.

“I’m going to look and see if it’s a fair vote,” Hendon said. “If the survey is flawed or unfair, any person would have a problem with that.”

Burnett said he’s aware that some black candidates might not drop out of the race when and if a consensus candidate is declared, but he said he’s not going to worry about it unless it comes up.

“You don’t take aspirin unless you have a headache,” he said. “We’ve got a lot of ministers praying on this.”