With less than a week until Election Day, Green Party candidate Ronald Lawless has kicked his campaign into overdrive by knocking on doors, working the phones and plastering the 1st District with billboard ads.

The Austin native hopes his “GOTV” campaign – that’s “get out the vote” – will spread his messages about school reform and eliminating government waste, and come Nov. 2, win him a seat representing the West Side and western suburbs on the Cook County Board of Commissioners.

But, perhaps surprisingly in an election season in which neck-to-neck candidates are leaping at every chance to get in print or in front of a camera, voters are hearing next to nothing from the other candidate: Incumbent Commissioner Earlean Collins. 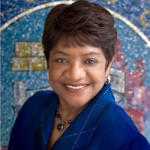 Unlike Lawless, Collins has run no ads and placed few, if any, yard signs in Austin. She has no campaign Web site and a scant Facebook entry under her name contains no photo or wall posts. She declined to fill out campaign questionnaires for both the Chicago Tribune and the Chicago Sun-Times – both of which have endorsed Lawless.

The commissioner’s office did not respond to two requests for an interview. On the third request, her scheduler said he was unable to schedule a phone interview at this time; he said AustinTalks could call back later in the week to try again to make an appointment, but that he was “not going to promise anything.”

Collins’ silence probably isn’t an accident. While Democrats nationwide are poised to take a beating in this November’s election, Collins’ quiet campaign may be seen as evidence of a local truth: When it comes to Chicago politics, the Democratic Party name still reigns supreme, especially when matched against third-party candidates whose Green or Libertarian labels carry relatively little weight with voters.

Dick Simpson, head of the political science department at the University of Illinois at Chicago, said he expects Collins to be re-elected quite easily.

Lawless, who has run for office previously as a Democrat, says he’s optimistic that voters will look beyond his party affiliation.

“My party affiliation is just a party affiliation to get me on the ballot so I can get to the next level,” he said. “I believe at the end of the day, people know me, people trust me. People are voting for the individual and not the party.”

Lawless criticized Collins for her silence.

“She’s participating in this election like she participated on the Cook County Board – absolutely missing in action,” he said in a phone interview Monday. “Not talking, not filling out the surveys, not returning (media) calls, is another reason why she needs to be retired. … You have to tell the public where you stand.”

Collins faced a challenge in last February’s primary, when she went head-to-head with three fellow Democrats for the seat. While Collins emerged on top with 47 percent of the total 1st District vote, challenger Ade Onayemi carried an impressive 30 percent. In fact, he surpassed the commissioner in votes from suburban Cook County, with 7,700 votes to Collins’ 5,513.

But she swept her most recent general election in 2006, winning over Republican Party candidate Henrietta Butler with 87 percent of the vote.

Collins, who was first elected to the County Board in 1998 after a 20-year career as a state senator, faced some criticism last year for casting a vote of “present” – essentially a non-vote – on a county sales-tax rollback. That vote, along with a comment she made after that – “You want to vote me out of office? Hooray. I would just love to go home for once in my life and relax.” – have caused some political foes and editorial boards to call for her retirement.

To hear Lawless talk about the issues, click here.