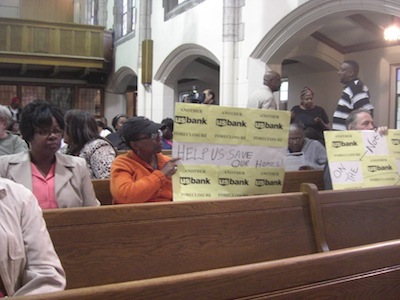 Tuesday night, US Bank officials attending a town hall on foreclosure, told West Side residents that a foreclosed property next to Delia and Oscar Ewing’s home in the 5300 block of West Congress Parkway would be cleaned and boarded up on Wednesday.

Delia Ewing, 84, said US Bank did not keep their promise, and the abandoned bank property is still overgrown with weeds and left wide-open to people who have taken up residence inside.

“No, they haven’t come,” she said. “No one has done anything. They promised they would help us and take care of this problem, but nothing has happened.” 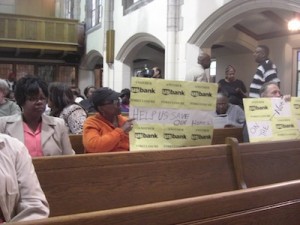 More than 100 people packed an Austin church Tuesday night to pressure US Bank to do more to fight foreclosure on the West Side. (Photo/Kelsey Duckett)

Neither McGhee nor representatives from US Bank could not be reached for comment Wednesday.

Elce Redmond of the South Austin Coalition said US Bank going back on its word is just more example of the Minnesota-based financial institution’s unwillingness to work with the community.

“It is a continuous pattern of disrespect that US Bank and all these other corporations have for these communities,” he said. “They made a commitment to get someone out there immediately to address this crisis, and they didn’t. That shows that they are unwilling to work with the residents of this community and form a partnership.”

Redmond, who entered the foreclosed home on Monday, said it’s a “mess.”

“I went into the basement, and the water is gushing onto the floor similar to the oil gushing in the Gulf,” he said. “There is trash all over both inside and outside the house, and the front yard is overgrown with weeds.” 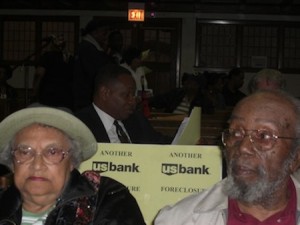 Delia Ewing and her husband Oscar want US Bank to clean up the foreclosed property next to their Austin home. (Photo/Kelsey Duckett)

Ewing said she can see people living on the second floor in the house and hears dogs barking at all hours. She recounted at Tuesday night’s meeting that on one occasion, a dead dog was brought out of the home.

“The weeds are as tall as I am, and there is trash all over the yard. Something needs to be done,” she said. “No one is supposed to be living in the house, it is a foreclosed home that was never boarded up. But the water is still running and the electricity is on, and there are people coming in and out of the house.”

Redmond said it’s now up to the South Austin Coalition and the Westside Health Authority to send volunteers over to clean up the property and board up the home.

“The bottom line is now we have to go out there and use our time and resources to take care of the problem to make sure the Ewings and other families on the block are safe,” he said. “So we have to fix their problem, a problem that is their responsibility.”

Ewing is holding out hope that US Bank will show up soon to address the issue.

“I just wish US Bank would have followed through and taken care of this because we are scared,” Ewing said. “But I guess we just have to stay inside and keep waiting.”