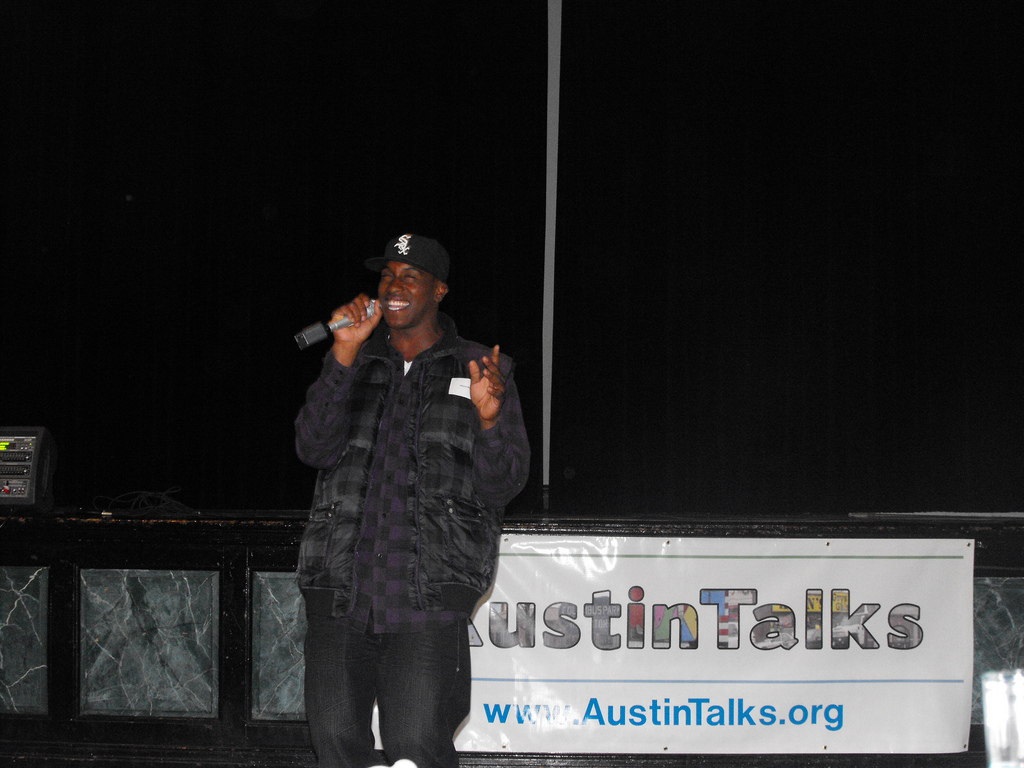 Jermaine “Shawn” Banks is trading in a rap sheet for rap songs.

The 19-year-old Austin resident, a multi-talented entertainer who has had a few brushes with the law, is dedicated to staying out of jail and bringing music and a message of hope to his West Side community. 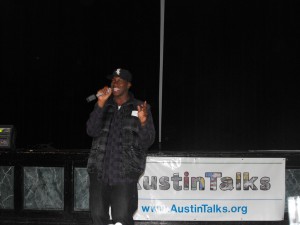 “Just keeping myself out of trouble and my music, that’s my first thing right now,” said Banks, who recently performed at the Westside Beat the Street Spelling Bee and at AustinTalks’ launch party. “I learned that it takes a struggle to help me progress.

“When I get this going, I’ll have everything I’m looking for,” Banks said of his music. “Everything I need.”

Banks is not only a rapper, but also a stand-up comic, a singer and event host.

But he didn’t always know where he was going in life. At the young age of 14, he was busted for the first time for possession of cocaine, which Banks said he didn’t use but sold to buy the “things I wanted in life” like shoes and flashy clothes.

“I grew up without a father, and my mom was a single mother who tried her best with five kids. But there were things I couldn’t get with four other kids, so I went my own route selling drugs,” Banks said.

By 16, Banks was lifeguarding for the Chicago Park District, but when winter came, he needed some cash. After all, he had a girlfriend, and Christmas was coming. Besides, he wanted money to take her out and to look good, so he’d need a pair of Jordan’s or Air Force One shoes.

He started selling heroin and again, got busted.

“My plan was just to get what I need and leave it alone,” said Banks, who spent 61 days in Cook County Jail. “I went to the mall and got everything. Then it hit me … I’m fixin’ to go back to jail because I was greedy.

“This was not for me,” said Banks. “I had to try to find money other ways.” 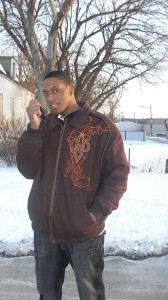 Shawn Banks hopes to make a living as an entertainer.

So Banks came home and stayed out of trouble for a year. He landed a gig at a local day care center but also started hanging with “the boys on the street.”

That led to the hit that Banks said changed it all for him. He was walking at Superior and Cicero streets with one of those “boys on the street,” when the guy decided to commit a robbery.

“He sees a guy approaching and says, ‘I’m about to get him,’” recalled Banks. “He robs him, and I’m standing right there on the scene. I could have walked off, but I stood there on the scene with him. I wanted half.”

Five minutes later, the pair was arrested. Banks spent another 18 months in Cook County Jail, where he sat until this past February.

“I had a child on the way, and my little brother was 1 and now is 3,” said Banks, who has two kids of his own, Jermaine Jr., 2, and Janiyla, 1. “It hurt me to see that I’ve gotta change. I had to find something to change my ways.”

So Banks talked with Danettte King, founder of Young Creative Minds, an organization for troubled teens. He had taken part in some of her community clean-ups before and had sought King’s help when he had been busted before. 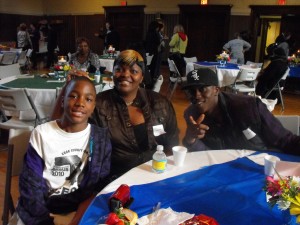 King had told Banks she’d be there for him only after he got out. “If you do the crime, I’m not gonna do that time with you,” she said. “Choose that route, suffer the consequences.”

King, also an Austin resident, first met Banks in 2008, when he came to Young Creative Minds looking to help out in the community.

“Without ‘Netta,’ I wouldn’t know Shawn right now,” Banks said of King. “She’s like a mother figure to me.”

King took Banks under her wing, as his goofy personality and practical jokes kept her and the kids in her organization uplifted.

“I would never have thought in a million years that this kid went through so much,” said King. “He wasn’t taken care of like he should have been and has had no moral support. Behind all those smiles was just somebody who wanted to be supported, wanted to be helped. He pretended like everything was good, when inside he was really coming apart.”

Yet as she soon found out, there was even more to Banks than met the eye. One day, King noticed he could actually rap.

“He caught me, I’m like ‘Wow!’” said King. “Anybody can take a few words and put them together and make them rap. But he has stage presence, personality … It takes a lot to be an entertainer. He has it all.”

“Shawn has a natural ability to perform, and in time, he could be one of the greatest performers to walk the stage,” said Taylor. “He’s genuine, kind-hearted, and very, very dedicated and determined.

“Shawn can be an inspiration to all young men” said Taylor. “He can be a role model for other young men coming from the same streets. He’s literally a walking miracle, a symbol of hope to young kids who come from the slums, from an urban neighborhood, where they don’t have many opportunities.”

Besides that, he’s a “great rapper,” said Austin resident Mary Hartsfield, who has seen Banks perform a couple of times.

“He’s blessed,” said Hartsfield. “I believe he’s one of the upcoming stars.”

Banks, who plans to enroll at Malcolm X College, said he’s looking to the future to stay focused on becoming just that: an upcoming star.

“I’m putting everything behind me and not looking back … I’m looking forward,” said Banks. “And I’m definitely making music.”

One thought on “Banking on Shawn Banks”