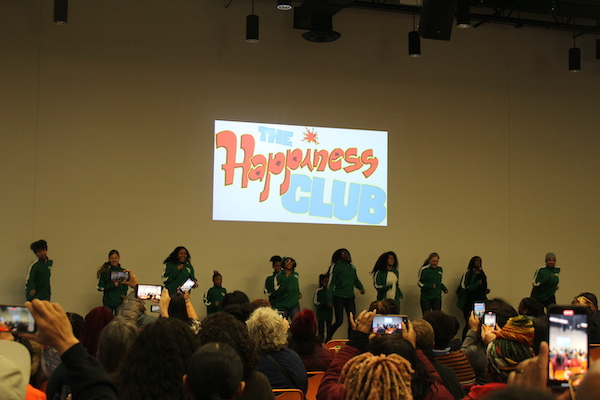 Austin Coming Together held its annual summit on Saturday to highlight successes and goals for the final year of the five-year quality-of-life plan.

Over 200 people gathered at the By the Hand Club for Kids‘ Austin campus for the first time since 2019, when the plan was in its first year of implementation. Over $100 million of investments have been made in Austin since then, said Darnell Shields, ACT’s executive director.

Major advances were celebrated including the upcoming openings of the North Austin Community Center and BUILD’s Youth and Community Hub. The Aspire Center for Workforce Innovation and the Laramie State Bank redevelopment are set to start construction this year and open in 2024.

The North Austin Community Center, a 150,000 square-foot facility with an indoor soccer field, basketball courts and classrooms, will open Feb. 2 with a ribbon-cutting ceremony from 1 to 3 p.m. The $35 million development, located at 1841 N. Laramie Ave., will serve 400 youth a day and is collaboration among By the Hand Club, Grace and Peace Church, Intentional Sports and the Chicago Neighborhood Initiatives.

The campus will be “transformative and catalytic” for North Austin, said Donnita Travis, By the Hand Club’s executive director.

“By developing that empty, toxic land, we are improving the safety and the health and the hope of the neighborhood,” Travis said.

Pastor John Zayas of Grace and Peace Church, credited Ald. Emma Mitts (37th, who was at Saturday’s summit, for helping with the development of the campus. Mitts blocked the city from building a solar panel farm on the previously empty lot, Zayas said.

A ribbon-cutting ceremony for the opening of of BUILD’s Youth and Community Hub will be on Feb. 25, said Adam Alonso, CEO of BUILD Chicago. Located at 5100 W. Harrison St., the building features an art studios, a café, a mental health center and a full gym with a track – and will be open seven days a week. The BUILD team surveyed 100 youth on what they would like to see in the new building, Alonso said.

“When we open, you’ll see what was the dream of our young people,” Alonso said. “The only thing that did not make it in was a swimming pool. Apart from that, everything else made it inside that building.”

Construction for the Aspire Center, at 5500 W. Madison St., is set to start this spring. And redevelopment of the Laramie State Bank, at 5200 W. Chicago Ave., is set to start next month with completion in fall 2024.

Along with the renovation of the bank, 78 mixed-income rental units will be included and a Black-owned coffee shop that will help train others to run their own coffee shops, said Athena Williams of Oak Park Regional Housing Center, which is overseeing the more than $60 million project.

Baxter Swilley of Oak Park Regional Housing Center said Austin’s top goals should be increasing homeownership and decreasing vacant lots. Their team launched a campaign called “Add Austin” to push for Austin to be added into city programs, including the Building Neighborhoods and Affordable Homes Program and the Chicago Neighborhood Rebuild pilot program, which provides workforce opportunities for ex-offenders.

“Austin has the highest rate of ex-offenders returning back to the community. It is insane that we are not a part of this program,” Swilley said.

The Aspire Center came about after members of the community pushed for the former Emmet School, which closed in 2013, to be repurposed. The Westside Health Authority bought the site a few years ago with the goal of turning it into something the community wants and needs.

“We need something to drive hope,” said WHA CEO Morris Reed. “Too many of us moved out of the neighborhood because we lost hope.”

Attendees at the summit were able to hear more details on each of ACT’s task forces in breakout sessions that discussed topics of public safety, community narrative, economic development, education, housing, youth empowerment and civic engagement.

During the public safety session, Sgt. Edgar Brown of the 15th District spoke to attendees about an upcoming block club convention on April 1 at Michele Clark High School. His goal is to have at least 200 vendors and 1,000 attendees for the event that will provide resources, including trauma therapy and mental health counseling.

“Once we interrupt the interrupters with positivity, they disappear,” Brown said.

BUILD plans on opening a Peace and Justice Center later this year to create a space for community circles and workshops. Edwina Hamilton of BUILD said there will be a restorative justice summit over Memorial Day weekend.

Austin residents are encouraged to join Austin Coming Together’s task forces to carry out goals during the final year of the quality-of-life plan. Anyone interested in getting involved can reach out to Ethan Ramsay, lead organizer of Austin Coming Together at eramsay@austincomingtogether.org.