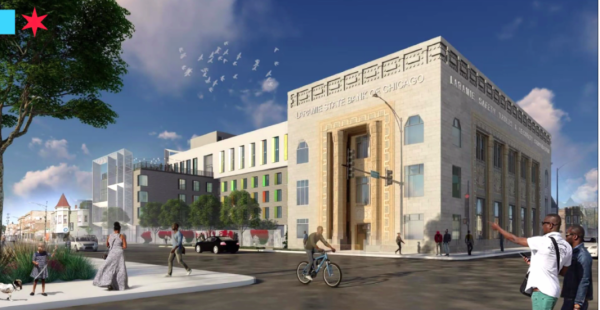 Construction on the former Laramie State Bank redevelopment project will begin Nov. 11 and the estimated cost has gone up, officials said Friday.

These details and others were discussed at a meeting organized by development partner Oak Park Regional Housing Center and held at Austin Coming Together’s office. Originally, the project, part of Mayor Lori Lightfoot’s Invest South/West initiative, was estimated to cost $33 million, but that number has grown to $45 million due to inflation.

Work on the residential part of the building will start first. There will be 78 units – 51 considered affordable and 27 that will be sold at market-rate. Austin is short about 8,500 units of affordable housing units, said Baxter Swilley, public relations director at the Oak Park Regional Housing Center.

“This project will be a catalyst for housing development,” Swilley said.

Floor captains eventually will be assigned to each of the six stories and the aim will be to create community and civic engagement among residents.

“We want people in this building to know each other because when people know each other, they stabilize and protect their property,” said Athena Williams, executive director of the Oak Park Regional Housing Center.

Concerns about parking were voiced by a number of attendees. There will be only 28 spaces, which meets the city’s requirements. Williams said partners are looking into options of expanding parking to other plots of land on Chicago Avenue.

“By 2026, Chicago Avenue is not going to look like it looks now,” Williams said.

The plan is for construction to be complete by March 2024, with full occupancy in the building by March 2025. Austin residents will have first access to rental applications for the one-, two- and three-bedroom units.

Sound-proof glass, art installations and a courtyard are among the ways developers are creating high-quality affordable housing to attract future private investments. The building also will include solar panels, business incubator, a community room and a coffee shop by Momentum Coffee.

“I don’t want it to look like I’m walking into Cabrini Green projects from 20 years ago,” Williams said.

Multiple committees will oversee the project including financial services, public safety and a Austin United Alliance housing committee. Williams said many are still being formed and need members.

The art deco building at 5200 Chicago Avenue was built in 1928, and developers want this building will last another 100 years.

“The youth will inherit what we do today,” Swilley said.