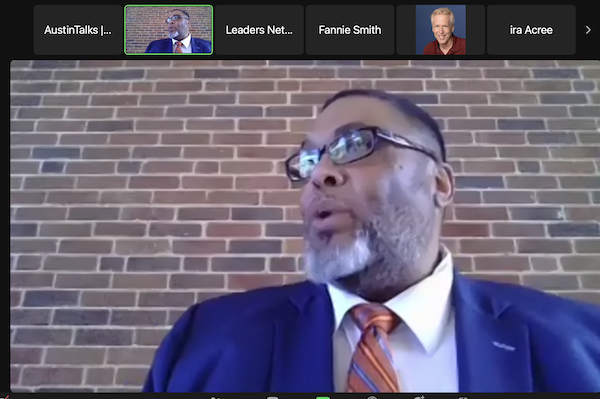 Ald. Chris Taliaferro (29th), chairman of City Council’s Committee on Public Safety, on Tuesday joined West Side faith leaders who have repeatedly called on the Chicago Police Department to fire an officer with alleged ties to the extremist group Proud Boys.

“It is my opinion that Supt. Brown should fire this officer,” Taliaferro said at The Leaders Network‘s monthly meeting. “We have fired officers in the past with lesser transgressions in their associations.”

He said the CPD must take the stance of firing any of its members who are associated with a hate group, whether the FBI has labeled them as such.

“Although the FBI has not labeled the Proud Boys as a hate group, we, as a general public and every organization that stands for racial equality [and] racial justice, know that the Proud Boys is a hate organization,” said Taliaferro, who who served on the CPD force for 23 years.

On Jan. 5, the Southern Poverty Law Center urged city officials “to reconsider the mild discipline of temporary suspension for Officer Bakker” in a letter addressed to Mayor Lori Lightfoot and Supt. David Brown.

Officer Robert Bakker was suspended for 120 days after two internal investigations looked into his ties with the Proud Boys. In the second investigation, requested by the city’s Inspector General, the CPD found the officer made “false and conflicting statements” about his ties to the Proud Boys.

Last month, Ald. Byron Sigcho-Lopez also urged Brown and Lightfoot to “immediately remove” the officer and every officer with ties to the Proud Boys, though he did not name Bakker.

Bakker recommended his own suspension as part of the mediation agreement that followed the second investigation. Taliaferro said that investigation resulted in five sustained allegations, including one of making false statements.

“Although a mediation agreement between an officer and the department is binding, the superintendent still can seek termination of an officer,” the alderman said. “I do want to stress that.”

Other superintendents fired officers if they lied in investigations, a violation of CPD’s Rule 14, Taliaferro said. When he served under Supt. Jody P. Weis, officers were terminated because the department had “no use for an officer who cannot be deemed to be credible in court.”

Rev. Marshall E. Hatch of New Mount Pilgrim Missionary Baptist Church said the officer should be immediately fired, and his suspension “sends the signals that this is no big deal.”

Hatch said the City Council should look into other police officers who are allegedly tied to extremist groups, according to reports by news media. Though Hatch did not name the outlet, in 2021 NPR found that 13 members of the Chicago Police Department could be associated with the far-right Oath Keepers.

“I was not aware of any external reports or any news sources that have said that we have a growing problem with other members in the department … but I’m more than happy to have a hearing with regard to that,” Taliaferro said.