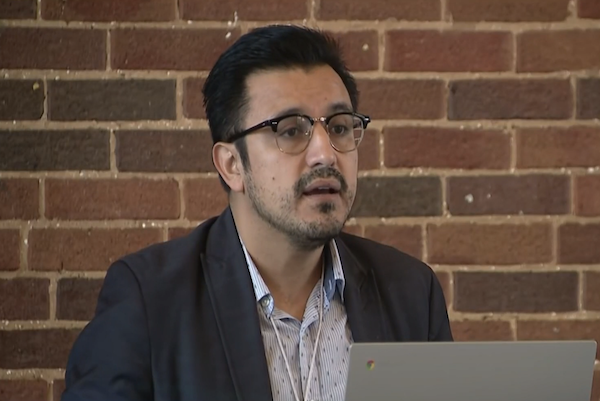 Ald. Byron Sigcho-Lopez spoke at this month's meeting of The Leaders Network, where he urged a police officer be fired for making false statements about his interactions with the Proud Boys group.

Ald. Byron Sigcho-Lopez (25th) joined West Side faith leaders Tuesday to call for the termination of Chicago Police Department officer who made “false and conflicting statements” about his ties to the Proud Boys, according to internal reports.

The officer was under investigation in 2019 by CPD’s bureau of internal affairs for allegedly attending a Proud Boys barbeque and participating in online forums associated with the far-right, white nationalist and exclusively male group. After a second internal review, CPD suspended the officer for 120 days.

At this month’s meeting of The Leaders Network held in Austin, Sigcho-Lopez called on Mayor Lori Lightfoot and Chicago Police Supt. David Brown to “immediately remove” the officer and every officer with ties to the Proud Boys. He called on City Council to hold hearings to look into the case, as reported by the Sun-Times.

Inspector General Deborah Witzburg said CPD’s bureau of internal affairs initially found the officer had failed to report they were under investigation by the FBI and received a five-day suspension.

In a subsequent investigation – after Witzburg’s office recommended the case be revisited – internal affairs found the officer made “false and conflicting statements” about his ties to the Proud Boys but did not find the officer violated rule 14 of CPD’s Rules of Conduct.

Rule 14 prohibits CPD’s members from making a false written or oral report. Witzburg recommended the officer’s termination but instead was suspended for 120 days in a mediation agreement that resolved the investigation.

Sigcho-Lopez said Tuesday the city is setting an “unacceptable example” by allowing Proud Boys to be part of CPD.

Rev. Marshall E. Hatch of New Mount Pilgrim Missionary Baptist Church said the city is allowing “insurrectionists” to be part of the police force, referring to the group’s participation in the Jan. 6th attack on the U.S. Capitol. Five members of the Proud Boys, including their leader, were indicted for “seditious conspiracy” and other charges earlier this year.

Hatch warned of the danger of having “insurrectionists” in the police force, referring to the attempted coup of the German government organized by a far-right group last week. NBC News reported one member of the group is a special forces officer.

In a prior city budget hearing, Supt. Brown stood by CPD’s decision to suspend but not fire the officer, saying the department has a zero tolerance policy for CPD employees to be members of or associate with hate groups. The Sun-Times reported Brown saying the 120-day suspension was a high level of discipline for what the department “was able to prove by preponderance of evidence.”

The Proud Boys have been classified as a terrorist group by the governments of New Zealand and Canada. Internal reports show the Federal Bureau of Investigation described the group as “an extremist group with ties to white nationalism,” as reported by NPR.

“We gotta realize the consequences of having Proud Boys white supremacists in the Chicago Police Department when the safety of the vast majority Black and Brown communities is on the line,” Sigcho-Lopez said.

He urged Chicago residents to hold City Council and the mayor’s office accountable and to demand they “take action.”