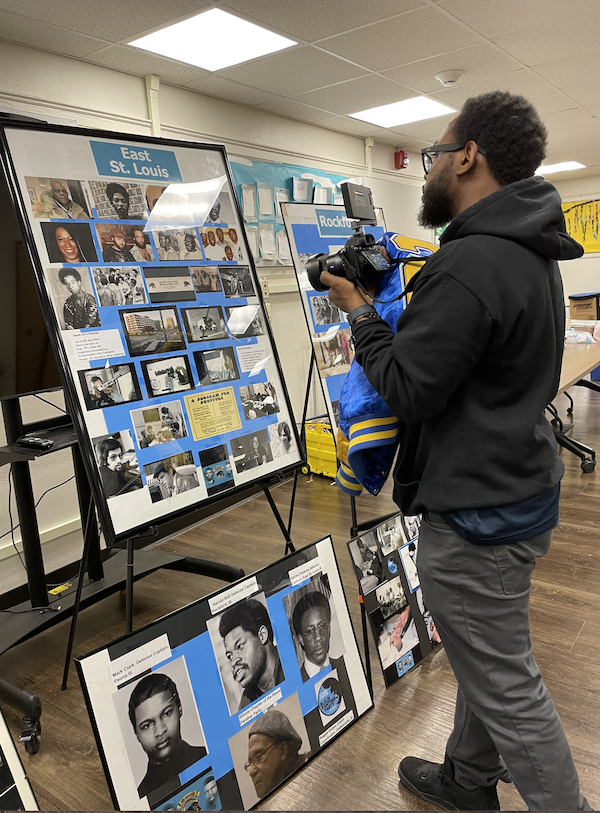 Since the 1970s, Henry Nesbitt and Stan McKinney have met with West Side community members. Back then, they did it in the name of revolution.

The two Illinois Black Panthers gathered with about a dozen West Side youth and adults recently to share the history of the party, as part of the series “Say It Loud! I’m Westside Proud” held at the Legel Regional branch of the Chicago Public Library in Garfield Park.

“I’m a product of America,” Nesbitt, who moved to the West Side from his hometown of St. Louis with his family, said at the beginning of the event. “All of my life, I’ve been exposed to violence, and I’ve realized almost all Black communities in America are exposed to police brutality.”

The three-part series was organized by the Westside Cultural Alliance, a nonprofit dedicated to preserving West Side cultural history. The goal of the series is to “make sure the histories of the West Side are documented,” founder Carol G. Johnson said.

The series invited residents to learn about the history of Black families and community members who lived in Chicago’s West Side in the 1960s and 1970s. For Nesbitt, it is an opportunity to talk to all types of people and explain to them what he knows and has lived through.

At the event, Nesbitt emphasized the Illinois branch of the Black Panther Party was very important in its history. He said while most people know the Chicago branch, the party had a presence across the state in areas like Carbondale, Peoria and Cairo.

“It’s unfortunate we sometimes forget about Mark Clark,” he said. Clark was defense captain for Peoria’s chapter and the first killed in the police raid that also killed chairman Fred Hampton at 2337 W. Monroe St. on Chicago’s West Side.

Police brutality and racism inspired McKinney to joined the party in 1969, at age 15. He said was “desperate” to do something.

“When people ask me what precipitated me to join the Black Panther Party, I say there’s three things that bring people to the struggle: inspiration, aspiration [and] desperation … I was desperate.”

He said he was one of many Black men who lived on Chicago’s West Side in the 1970s who were arbitrarily detained by Chicago officers or tortured into confessing. Some of the torture methods included mock Russian roulette, beatings with newspapers and sticking needles under their nails, he said.

“This was regular play as a Black men in the West Garfield community,” he said.

“Many people thought Jon Burge had just come into existence in the 80s and 90s … they was doing that stuff back then when I was a shorty.”

In 2016, the city of Chicago paid reparations worth $5.5 million to 57 victims of torture tied to Police Commander Jon Burge. Burge was the commander for area 2 in Chicago’s South Side and is tied to torture cases of more than 100 African American men, according to the Sun-Times.

But it was not only police brutality that Black communities faced; there were other oppressive conditions, such as lack of health care services and food insecurity.

McKinney and Nesbitt emphasized the party aimed to address these conditions through its survival programs, including a free medical center in Lawndale that exposed the prevalence of sickle cell anemia in the Black population, as reported by the Sun-Times.

“We took a school bus, a yellow school bus, took all the seats out and turned it into a lab,” McKinney said. “We were testing 3,500 school kids a week.”

Another example of the party’s impact was its free breakfast program. In Chicago, it started at the Better Boys Foundation located in Chicago’s West Side, McKinney said.

One attendee asked how young people in Chicago’s West Side can organize themselves to make changes for their community.