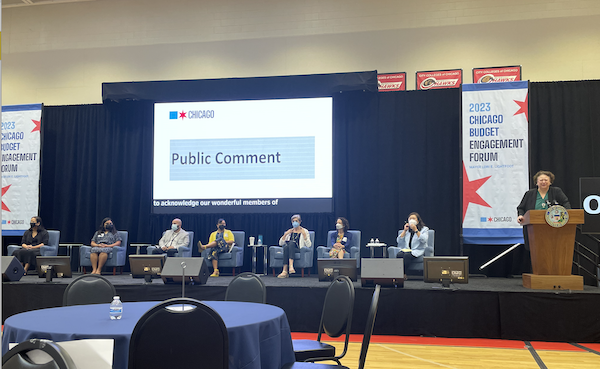 The Austin resident, one of dozens who attended a forum last weekend, had a question for Chicago officials as they craft the 2023 spending plan: How much of the budget for affordable housing will prioritize homeownership?

“It’s concerning … how as a person who wants to remain a homeowner is truly forced out because we can’t afford it versus $635 million that is going to affordable housing” she said.

The resident said rehabbing costs and city fees surpass the value of her property, which her family has owned since the 1970s.

She was one of about 60 Chicago residents who talked about the areas they would like next year’s city budget to prioritize at a forum held at Malcolm X College Saturday. A final forum will be held this coming weekend.

The city of Chicago invested $635 million to “maintain and expand affordable housing” in 2022 as part of the Chicago Recovery Plan and other local funds, said Susie Park, director of the city’s Office of Budget and Management.

Marisa Novara, commissioner of the Chicago Department of Housing, said besides these investments, the city’s housing agency also invests in grant programs that help homeowners cover the costs of improvements and repairs.

Two other residents said mental health services and trauma-informed responses should be a priority in next year’s budget, and they asked city officials why the city-run mental health clinics that were closed during Mayor Rahm Emmanuel’s administration have not reopened.

Yet another resident said the city should prioritize climate change mitigation. Other residents said the forum was a good opportunity to participate in city government and learn about existing programs.

“We want you to be our thought partner,” said Tina Hone, the city’s chief engagement officer.

Residents were asked to participate in four 15-minute roundtable discussions with city officials to share their recommendations for investments in four areas: affordable housing; community safety and youth programming; public health services and mental health; and community development and arts and culture.

After the discussions, city officials heard from residents and provided additional information about this year’s budget as well as city programs.

“After multiple rounds of engagement with residents all over the city, we built – you and I, and everyone else who participated – the most progressive budget in our city’s history,” Lightfoot said. “The 2022 budget planted seeds and a promise for Chicago’s future. The 2023 budget is about keeping that promise and ensuring that those seeds are nurtured.”

At last weekend’s forum, residents completed surveys that asked for their top priority in the four investment areas. The survey results, along with meeting notes, will be included in a public report being compiled by the University of Illinois at Chicago’s Great Cities Institute.

The report, which will be published in August, will inform next year’s budget and prioritize residents’ needs, Park said.

“Last year, your feedback helped shape more than $1.9 billion in investments across multiple appointment areas,” Park said. “Today, your ideas and thoughts will continue to provide valuable information for the 2023 budget.”

Ald. Walter Burnett Jr. (27th) commended the mayor’s administration for organizing the budget forums and thanked attendees for participating. But he wishes more residents had attended.

The last budget forum will be held July 30, from 10 a.m. to 12 p.m. at Harry S. Truman College. More information can be found here.

The city’s budget forecast will be published in August, and the budget recommendations will be submitted to the Chicago City Council in October; the council has to approve the 2023 budget by Dec. 31.