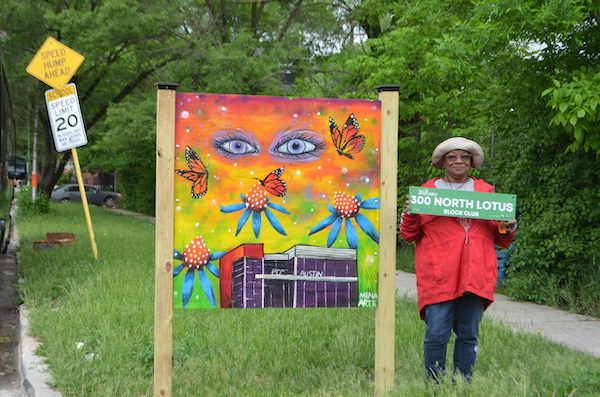 West Side residents, artists and community leaders boarded a bus May 15 at the 15th Police District to take a tour -led by police officer Danielle Brown and Sgt. Jermaine Harris of Austin, North Lawndale and Humboldt Park.

Participants saw eight of the 10 murals that have been installed to beautify the streets and visually represent West Siders’ spirit and vibrancy.

Last month’s tour was just one of many ways the 15th Police District engages with residents as part of their strategy to increase safety through community-based initiatives. The murals came about from an initiative that brought together block clubs, nonprofit organizations and the 15th District.

“This could not have been done without the support of so many people,” Alexandra Auguste said. “And first and foremost, is the residents. So, thank you for being honest and open and sharing.”

Auguste is co-founder of the Community Leadership Fellows, a program that partnered with block club presidents and the local nonprofit Taproots to host peace circles on 11 blocks on the West Side last year.

The peace circles focused on themes of leadership and hope for the future, but most importantly, they provided an opportunity for the residents in each block to engage in conversations about the vision they want for their neighborhood.

“That’s really what it’s about, being able to take care of yourself through creation –through creating the things that you wanna be and see in your life,” Chris Thomas, founder of YourPassion1st, said. “Without community, none of this is possible.”

These conversations inspired the creation of murals representing the collective vision of the residents in each block. Artists and leaders of the local art organizations Paint The City, Antidote and YourPassion1st joined the tour to share how the project provided local artists an opportunity to use their talents to benefit their communities.

“I really enjoyed doing something like this. I don’t really do anything for the community, so me being a part of, you know, youth, I feel like I should be more involved. And this is the first step to do so,” artist Brenda Dickerson said.

Dickerson, a visual artist and a participant of YourPassion1st’s youth program, created the mural for the 3300 West Lexington block club. In all, 12 artists from Paint The City, Antidote and YourPassion1st also worked in the creation of the murals.

Beyond admiring the beautiful artwork that was created for each block, the tour gave attendees the opportunity to learn from each other, observe the work that block clubs have achieved and listen to the stories of residents who have lived in Austin, Humboldt Park and North Lawndale for generations.

Velda Brunner, president of the block club in the 300 of North Lotus, shared how they created an urban farm where they grow free produce for residents. The farm also has eight land plots available for residents.

“Each plot was donated to a person in the community [for] free,” Brunner said. “So they’re able to come out, plant on it, harvest it, and they also put stuff on the table for other people to get.”

Participants also celebrated the positive impact of community and teamwork, highlighting the effect that community-based organizations can have when they engage with residents to find out their needs and work together to address them.

“This is what happens when you actually talk to community, talk to residents and you ask them what they want,” Auguste said. “This is simple, just ask.”