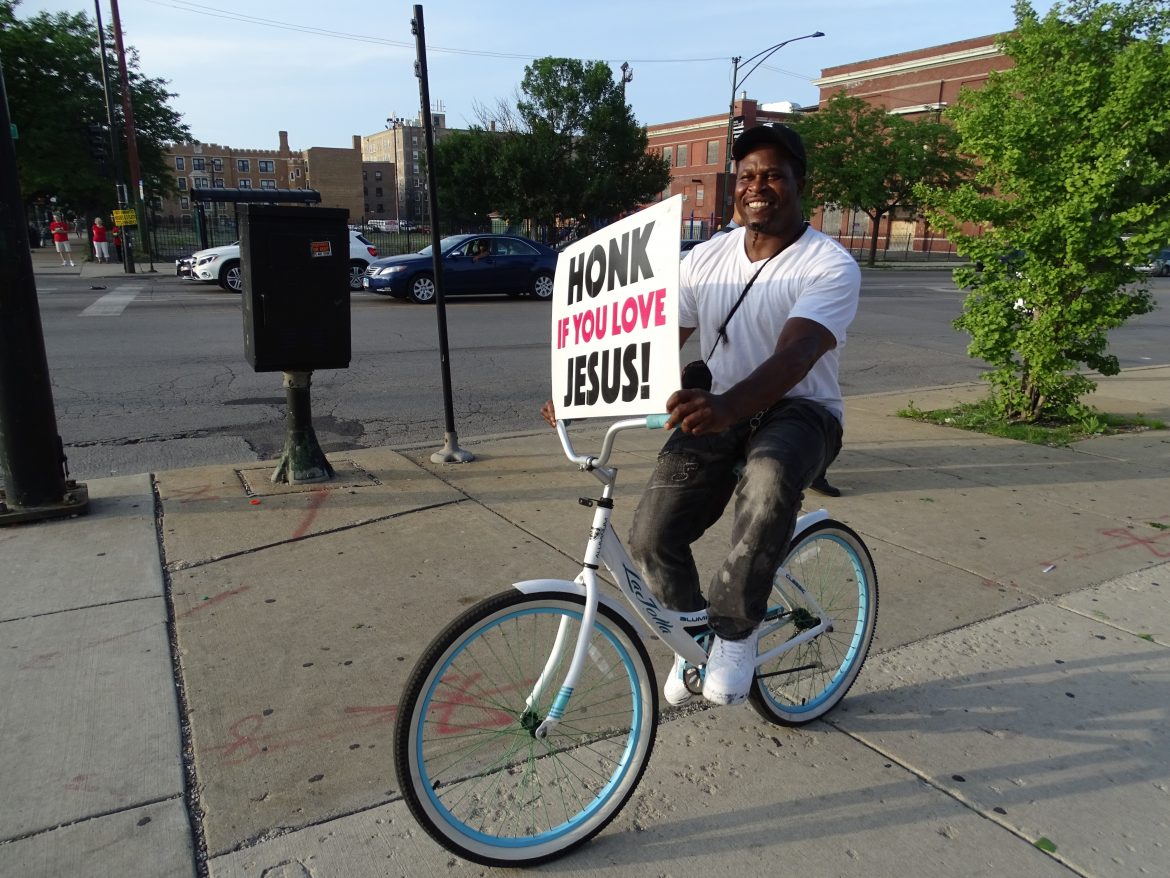 A participant takes part i 2018 in the annual 100 Blocks/100 Churches campaign on the West Side.

On Wednesday nights, residents, police officers and several congregations will again be taking to the streets to unite for peace. West Siders have been participating in this annual event for more than 10 years.

Sgt. Edgar Brown of the 15th District said the focus will be on “hot spots,” as he encouraged faith leaders and block club leaders to contact the CAPS office if they identified areas that would benefit from the campaign.

“We want everybody to feel seen,” he said. “We have to bring the energy back that Austin always had.”

Also at the last week’s faith-based meeting, Sgt. Jermaine Harris, leader of community policing programs in CPD’s Area Four, announced this year’s Block Club Conventions Series. These events support the work of block clubs who work together with residents to improve the areas where they live and recognizes their role in keeping communities safe.

“Pretty much you’re taking a block club party atmosphere and adding job fairs, adding resources, adding activities for youth to activate a space that traditionally doesn’t get that love or that attention,” Harris said.

The series will connect local organizations with residents on their blocks so they can learn about job opportunities, local activities and public programs available to them in four blocks on the West Side. Harris said local organizations can “show up and claim a spot out on street” during the events or contact him in advance to participate.

Austin’s Block Club Convention will take place June 25 in partnership with the 300 North Lotus block club. If the program is successful, it will continue across the West Side throughout the summer, Harris said.

Youth activities are also planned for the summer, including the “15th District Station Exploration” program where groups of young people can visit the police station for a tour.

Officer William Martinez, youth liaison, said the program is an effort to “get rid of the stigma that if you walk into to the police station, you’re in trouble,” and the aim is for it to foster positive relationships between police officers and community members.

A youth summit and festival, organized by the 15th District, YourPassion1st and My Chi, My Future, will take place at Columbus Park on Aug. 12 from 8 a.m. to 8 p.m. Local youth organizations who want to engage with youth can register to participate in the event.

In addition, the 15th District plans to host a 24-hour camping day at Columbus Park in August, before young people and children return to school. The date for the camping trip will be announced soon.

Martinez also shared that the 15th District has five part-time summer jobs available for young people ages 16-24 to produce a podcast that will focus on “spreading the word” about events happening in Austin among other young people.

He said the 15th District also seeks volunteers to set up a youth swimming program at Austin Town Hall Park.