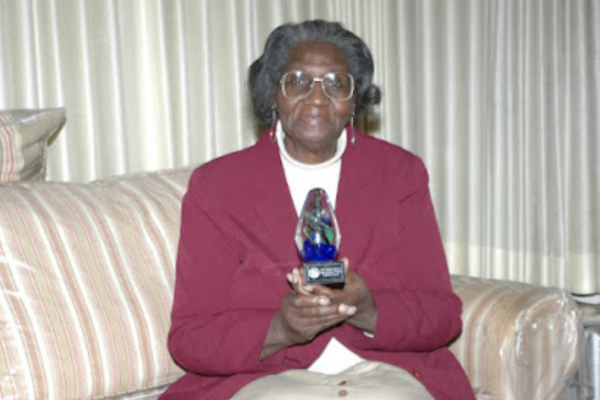 Third Unitarian Church will be celebrating Roberta Wilson this weekend.

Wilson, who turns 95 next week, will be honored at the church’s 11 a.m. Sunday service. Since joining the congregation in 1968, she’s become a cornerstone of the church, devoting her life to finding ways to help Austin residents and churchgoers.

“It has always been my proposition to work with the community,” Wilson said.

Wilson, who was born in Thomson, Georgia, to a family of nine children, moved to Chicago in 1943. She first came to Third Unitarian when the church invited Dr. Martin Luther King Jr. to speak in the late 1960s.

They have both been important figures guiding her work in Austin.

“I appreciate the service that Dr. King and Reverend Wheat offered to me as a person, and I appreciate whatever they’ve done and instilled into me to help somebody in the West Side.”

Wilson has found the best way to help the West Side is through education. “This is life. Without an education, you can’t survive.”

In 1974, Wilson co-founded Third Unitarian’s Austin Scholars Award Program, a scholarship program that awards seniors in high school with a stipend to financially support their first year in college.

At the time, Wilson and five other church members, including Rev. Wheat and Earl Williams, who was then principal of Austin Community Academy, found the best way for the church to support the community was through the scholarship program, said David Boulanger, a longtime member of Third Unitarian.

Lorrie Akins, a member of the church’s scholarship committee, said Wilson’s commitment to providing support to students and giving them a leg up is clear. “She’s very concerned about providing ways for people in her community to have access to education and better education.”

Education teaches people to help others who are in need and to work with others toward a common goal, said Wilson, who worked as a paraprofessional for Chicago Public Schools but never went to college herself.

In the past, students received a $1,000 stipend in two installments. Starting this year, students will receive an additional $500 stipend at the beginning of their sophomore year in college, said Charles Gunn, a member of the church’s scholarship committee.

When she co-founded so many years ago, Wilson wanted it to be a permanent effort. She continues to participate as a member of the Austin Scholars Award Program Committee, serving as a co-chair, and every year, she reviews students’ applications and interviews them.

Wilson also helps fundraise for the program and asks fellow church members, civic leaders, and Austin and Oak Park residents to serve as mentors to the scholarship winners.

Sunday’s service will celebrate Wilson’s nearly century of life as well as her 48 years of work with the Austin Scholars program.

It may be her sense of purpose that keeps her going. Go-getter, dynamic, active are some of the adjectives her fellow church members and friends use to describe Wilson.

“I want get to a 100 … I want to have many, many, many more birthdays to come,” Wilson said. “I wake up in the morning, and I just say thank God that I woke up this morning. I say now I’m gonna help somebody. I really wanna help the seniors, and I’m a senior myself.”

She stays in touch with several students who were awarded scholarships and continues to give them advice. “They come to see me, they call me.”

Wilson often reflects on what her parents taught her: Whatever you do, do your best. Wilson wants to see everyone in the community – young people, senior citizens, parents, neighbors – doing their best.

And she leads by example, as she is now focused on learning something new herself.

Church goers applaud her drive and attitude. Notes Boulanger, who’s 81 himself, “What I think Roberta has demonstrated to all of us is how you can continue to live an active life as an elderly person.”