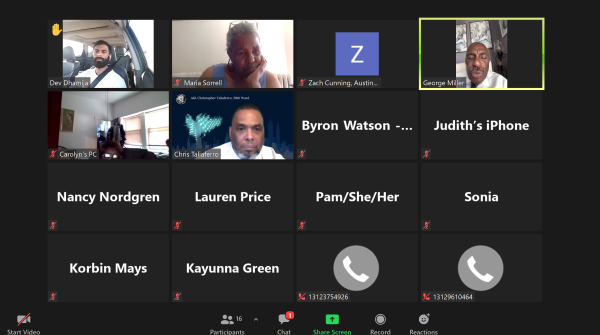 At a community meeting for the 29th Ward last week, Ald. Taliaferro said it’s time to put the The Loretto Hospital vaccine scandal to rest and focus on getting community residents vaccinated.

Block Club Chicago first broke the news in mid-March that dozens of workers at Trump Tower had been vaccinated by the hospital, where former Loretto COO and CFO Anosh Ahmed owns a condo.

In the following weeks, additional instances of Loretto providing vaccinations against Chicago Department of Public Health rules came to light. Employees at a Gold Coast watch shop and a steakhouse frequented by Ahmed, members of Miller’s suburban church and Cook County judges all received vaccines in violation of health department rules.

The scandal triggered resignations, including that of Rep. La Shawn Ford from the hospital board, the city temporarily cutting off Loretto’s vaccine access and an internal audit.

Miller has acknowledged multiple times the hospital made errors in their vaccination program.

“I take 100% responsibility for those errors,” he said Wednesday.

Miller attended the monthly ward meeting to answer community questions, “so we, as a community, can move on to make sure that our residents are vaccinated,” Taliaferro said.

Most recently, a joint story by Block Club Chicago and the Better Government Association raised questions about money, travel and campaign donations that Illinois Senate Majority Leader Kimberly Lightford, vice chairwoman of the hospital’s board, had received through Loretto’s insurance company.

Miller said at Wednesday’s community meeting, “I don’t believe that they were improper funds. She was reimbursed for being on the captive insurance company.”

In the late 1990s, Loretto was unable to get insurance, Miller said. As a result, the hospital formed a captive insurance company, which is a type of licensed insurance company owned by the entity it insures.

The company is incorporated in the Cayman Islands. Local laws require board members to travel there at least once a year for board meetings, Block Club quoted Loretto Hospital spokeswoman Becky Carroll as saying.

The issue has been covered at least two other times, Miller said – including by the Illinois Times in 2016.

“My opinion is [Lightford] does a fantastic job certainly for us and the West Side,” he said.

The hospital is testing a plant-based vaccine that if it receives FDA approval, would be cheaper to reproduce than the vaccines currently on the market from Moderna, Pfizer, and Johnson & Johnson, he said.

Miller said Loretto, which serves a majority Black area, is doing trials because diversity in clinical trials is important. “Only 3% of clinical trials are people of color in America.”

He said the hospital wants to show the community these vaccines are safe and effective, and “to be one of the resources that provide value to our community.”

Miller said volunteers for the trials will be paid and receive free healthcare for the duration.

Loretto is offering appointment or walk-in COVID vaccinations Monday, Wednesday and Friday from noon until 6 p.m. and Saturdays from 9 a.m. to 3 p.m.

“I want to make a very pronounced plea that everyone needs to be vaccinated,” Miller said.

Another topic that came up at last Wednesday’s ward meeting was protests held two weeks ago outside Taliaferro’s North Avenue office. Dozens of protestors gathered outside the 29th Ward office to demand the alderman bring the Empowering Communities for Public Safety ordinance to a vote in the Public Safety Committee, which he chairs.

The ordinance would implement sweeping oversight reform for the Chicago Police Department, establishing an 11-person commission to oversee CPD. The commission would have the power to hire and fire the superintendent, negotiate police contracts and set the department’s budget, taking those powers out of the hands of alderman and the mayor.

Mayor Lightfoot submitted her long-awaited counter proposal for community oversight of CPD last week. In her plan, a smaller seven-person committee would be empowered to “assess performance of and set goals for” the CPD’s upper brass, the Sun Times reported.

The mayor would retain the ability to hire and fire the superintendent, according to the Sun Times.

At Wednesday’s meeting, Taliaferro said he believes in democracy and people’s right to make their voices heard. “I don’t think my office is exempt from protest.”

But he said his responsibility is to do what he believes is best for the residents of the 29th Ward.

“They were protesting because I haven’t taken a position on what they call the people’s ordinance,” Taliaferro said.

As Public Safety chairman, “I don’t want to influence one ordinance over another, nor do I want anyone to say, if it’s voted down, that I showed bias.”

Taliaferro said he would withhold his support for either bill until it came time for a vote but noted: “I am supportive of community oversight.”