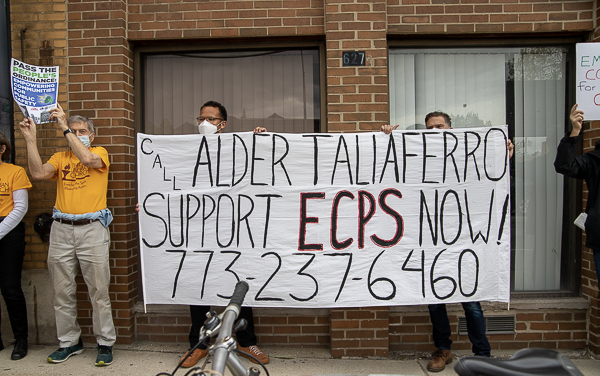 About 50 demonstrators gathered outside the 29th Ward office at 6272 W. North Ave. earlier this week and called on Ald. Chris Taliaferro to bring the Empowering Communities for Public Safety ordinance to a vote in the Chicago City Council’s Public Safety Committee.

Ald. Taliaferro’s office did not respond to a request for comment.

“We could have all been anywhere else on Monday evening, but here we are, out here in front of Chris Taliaferro’s office,” said Carlil Pittman, a co-founder of Good Kids Mad City.

Pittman said the community has “seen our people suffer” because of police violence.

“And now we have an opportunity to bring real change into our city and be a model for other cities, to be a model for the country and what policing should look like in our communities,” he said.

“And we’re here because enough is enough.”

Pittman said Mayor Lori Lightfoot has been talking about working directly with communities, as well as releasing her own ordinance in response to the Empowering Communities for Public Safety’s propoal.

But he said he’s yet to see any real action from Lightfoot, who served as head of the Chicago Police Board before being elected mayor two years ago.

Lightfoot views the current bill as “outsourcing” responsibility for CPD, according to the Chicago Sun-Times.

“I wear the jacket, as every mayor does, for violence in this city, for crime in this city,” the Sun-Times reported Lightfoot as saying. “And the notion that we’re gonna outsource that to someone else and have no responsibility — no ability to impact this — I don’t know anybody who thinks that’s a good idea.”

The mayor was reported as saying she’s heard a clear message from residents of communities most impacted by violence: “Please, mayor don’t walk away from us.”

Lightfoot said while those may not be the people actively protesting, “they are very much concerned about what’s happening in their neighborhoods. So we have to come up with the plan that is also responsive to them,” the Sun Times reported.

On Monday, Pittman said, “We are the ones who’ve been in the community and meeting with the community. So, who is she talking to?”

Frank Chapman told the crowd, “What we’re doing here is unprecedented in the history of this country.”

He said this is the first time a city council anywhere has taken up an ordinance of this type and magnitude “with even the possibility of passing it.”

In an interview, protest leader Guillory said the proposed ordinance “is something that was put together by hundreds of community organizations and thousands of people. Legal experts, organizers, activists, family members of people who’ve been harmed by the police. This is possibly the most transformative police reform in the history of this country.”

If approved by the city council, the binding referendum would come before Chicago voters in the 2022 primary.

ECPS would establish an 11-person oversight commission made up of nine elected members and two mayoral appointees.

The oversight commission would have powers to hire and fire the head of the Chicago Police Department, negotiate police contracts and set the police department’s budget, taking those powers out of the hands of the mayor and aldermen.

“We’re getting this thing passed. And that’s what we’re here to say, with or without Ald. Taliaferro, we’ll get it passed,” Guillory said.