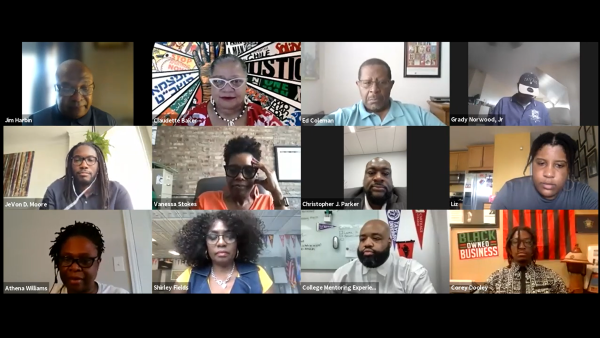 Athena Williams, executive director of the Oak Park Regional Housing Center, told attendees the Austin United Alliance – which was selected in March to develop the Laramie State Bank building and is made up of the regional housing center and Heartland Housing – is “very open to working with everybody in the community.”

She said that work includes a website with real time updates so the community can stay abreast of the development, flyer distribution, putting information in community newspapers and holding events throughout Austin.

As previously reported by AustinTalks, city officials announced March 8 that Austin United Alliance had been selected from among seven applicants to develop the Laramie State Bank building.

The winning proposal includes a new bank branch in the building at the corner of Laramie and Chicago, as well as a café, an interactive blues history museum and a business incubator.

Chase said they plan to start construction in the first quarter of 2022 and are “estimating somewhere around a 14- to 18-month construction period.”

But, he said, that timeline is dependent on numerous factors, including tax credit financing and “lining up our capital stack as necessary to build this project,” as well as weather.

Williams said wealth building in the community is “a big part of this project.”

They plan to host virtual wealth building seminars, as well as live events, and will develop a team of “Laramie State Bank Ambassadors that can walk through this process with us,” she said.

Williams said the goal is to “make sure that wealth goes back into the community” and that will be the sole purpose of having a community-led board of directors for the bank.

The board of directors will manage and operate the bank building’s budget, she said, and at the end of the year they will “develop a plan to invest either in the businesses on Chicago Avenue or to help the capacity of a nonprofit in the community.”

Once it’s up and running, there will be plenty of businesses along Chicago Avenue for the bank to invest in.

Malcolm Crawford, executive director of the Austin African American Business Networking Association – the corridor manager for the Chicago Avenue priority corridor under INVEST South/West – said there are numerous businesses receiving neighborhood opportunity fund money and many additional businesses opening in the near future along what is known as the Soul City Corridor.

The Soul City Corridor stretches along Chicago Avenue from Austin Boulevard to Cicero Avenue, and Crawford sees it as an economic driver specifically for Black Chicagoans.

“In Lagos, Nigeria, which is 9 million Blacks, there is a Chinatown, and there is no place for … Africans in that country as an economic driver. So, to have this place Soul City on Chicago Avenue, there is no place like that in the world where blacks are beginning to control the economics in their community,” he said.

Some of the new businesses opening or soon opening along the corridor include a location for Batter and Berries, which will open alongside an event space called The Bruce at 5925 W. Chicago Ave.; Marseil Jackson’s Soul City Studios (5849-51 W. Chicago Ave.); 40 Acres Fresh’s first brick and mortar grocery store (5713 W. Chicago Ave.); and Soul City Place (5814-45 W. Chicago Ave.), which Crawford said will contain 30 housing units and 10 storefronts.

“There’ll finally be a place in this country where Black people do business with Black people, and everybody else too,” Crawford said.