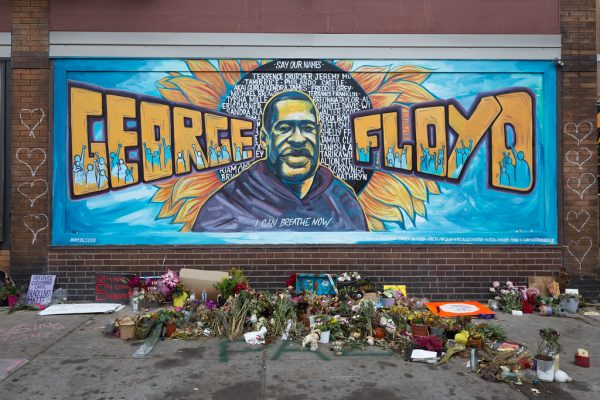 The memorial in honor of George Floyd outside Cup Foods in Minneapolis where Floyd was killed.

The Leaders Network commends the office of Minnesota Attorney General Keith Ellison and the prosecution team for their exemplary job in proving the case against former Minneapolis police officer Derek Chauvin for the murder of George Floyd.

The scene last May of Chauvin placing his weight and kneeling the life out of Floyd was cruel and demanded nothing less than the charges for which he has now been convicted.

Seeing Chauvin handcuffed and taken into custody is an extremely rare instance of a law enforcement officer being held accountable for taking the life of a Black person.

Around the country, we have seen the majority of these cases result in acquittals if there was a trial and too many cases where there was no trial nor justice at all.

There was no accountability nor justice for the deaths of Alton Sterling, Philando Castile, Rekia Boyd, Eric Garner, Bettie Jones, Quintonio LeGrier, Oscar Grant, Sandra Bland, Harith Augustus, Jemel Roberson, Breonna Taylor, Daniel Prude and so many others within the past few years. The officer who shot and paralyzed Jacob Blake last summer in Kenosha also escaped justice.

No officer was held accountable even when they killed children as young as 7 year-old Aiyana Stanley-Jones or 12 year-old Tamir Rice.

We must remain vigilant for justice until we hear the sentencing of Chauvin, which will occur in eight weeks.

In October 2018, a jury convicted former Chicago police officer Jason Van Dyke of second-degree murder and 16 counts of aggravated assault for shooting Laquan McDonald 16 times, killing him on the streets on the West Side.

In January 2019, Cook County Judge Vincent Gaughan sentenced Van Dyke to just seven years in prison – with good behavior, Van Dyke becomes a free man in 2022.  Judge Vaughn proved to be a firewall to justice and prevented Van Dyke from receiving the long sentence for which the jury convicted him.

Judge Peter Cahill, who presided over the Chauvin trial, has a responsibility to impose a long sentence on Chauvin that will send a message that this heinous crime will not be tolerated in a civilized society.

In Minnesota, second-degree murder can carry a term of 40 years in prison. Only after we hear Judge Cahill’s sentence in June will we know if the murder of George Floyd has resulted in the true justice that is warranted in this case.