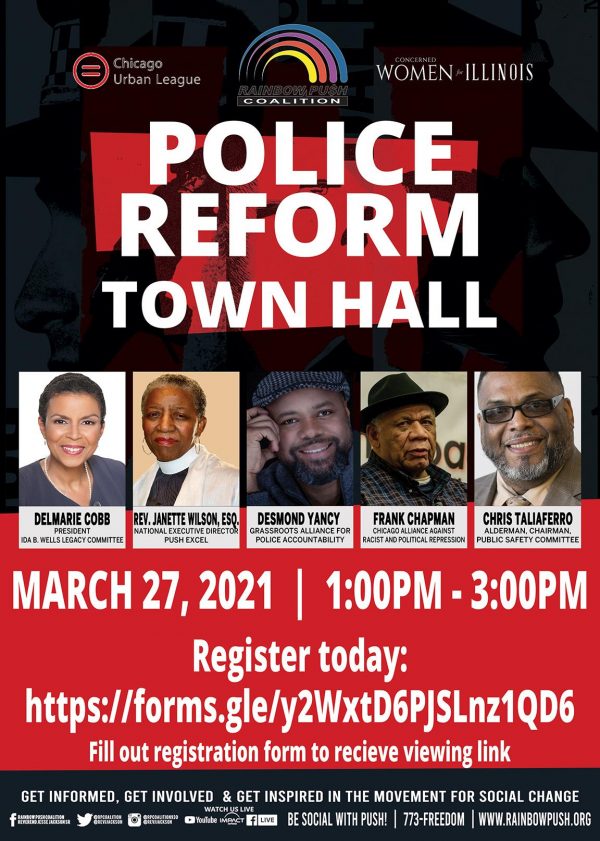 A virtual town hall held last weekend put the spotlight once again on police reform, with advocates continuing the push for more civilian oversight of the Chicago Police Department.

A proposed ordinance before the Chicago City Council would take power from the mayor’s office and give it to a civilian-led commission.

Ald. Chris Taliaferro (29th) repeated his concern about those powers being removed from the mayor, while others who spoke at the March 27 town hall voiced support.

Frank Chapman of the Chicago Alliance Against Racist and Political Repression, Desmond Yancy of the Grassroots Alliance for Police Accountability (GAPA), and media and political consultant Delmarie Cobb also participated in the town hall.

GAPA has been advocating for months for the creation of a civilian commission with police oversight.

The makeup of the commission would come from all parts of the city and include two youth representatives (ages 18 to 24) and attorneys with experience in social justice reform.

Mayor Lori Lightfoot has said she opposes the proposed ordinance and is in the process of writing her own. Lightfoot said she won’t “outsource” control of CPD, as reported by the Chicago Sun-Times.

The ordinance is designed to rebuild the trust the Black community has lost in the police, said Cobb, who supports the proposal, saying this is only “one piece of the puzzle” the U.S. Department of Justice needs.

Since 2019, the CPD has been under a federal court order requiring it to enact reforms in discipline, supervision, training and recruiting. Last week, the Chicago Sun-Times reported the city missed about 60% of its deadlines in 2020 to make reforms as required by the federal consent decree.

Taliaferro, a former police officer, said while the ordinance will help give the community a voice, it won’t stop police misconduct. “The ordinance will not fix all the wrongs in a system. We need to change policy.”

The alderman supports the mayor’s desire to write her own ordinance, which could be voted on in this month.

If GAPA’s proposed ordinance passed, voters would need to approve a referendum in 2022 that would give the civilian commission the power to set CPD’s budget, hire and fire the police superintendent, and negotiate contracts with police unions.

Chapman urged the mayor to join the community’s fight for police reform, saying “it’s our democratic right to decide who polices us.”

Yancy said if the mayor writes an ordinance that isn’t built with and by the community, she will lose all credibility.

Mayor Lightfoot ran on creating civilian oversight her first 100 days in office; it’s been two years since Lightfoot was elected.