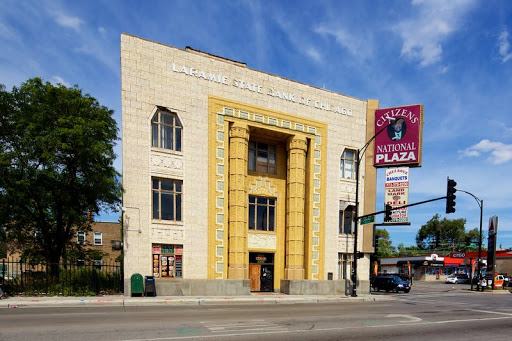 Two of the seven groups vying for the right to develop the former Laramie State Bank building received the highest score in a community survey as city officials move closer to choosing a winner.

The scores were disclosed recently at a community roundtable held by the Chicago Department of Planning and Development, which presented its own analysis of all seven applicants who responded to the RFP.

The city will base its decision on its own evaluation of each group’s ability to build wealth in the community, the developer’s competence and economic feasibility, among other factors, the city said at the roundtable.

“That is intertwined with what feedback was actually heard from the community and the online survey that addresses community wealth, that addresses the competence of the proposal,” said Ethan Lassiter, a city planner.

Each proposal was scored on a five-point scale based on community feedback about diversity of the respondent’s teams, their ability to develop local business and create job opportunities, and their prior experience on the West Side.

The other applicants’ scores were:

Scores were based on a survey the city sent to community members who attended either or both of two informational sessions in January. The department received 27 total responses, Lassiter said.

There were roughly 100 participants at each informational session.

The Soul City STEAM Center and Soul City Center, which tied with the highest score of 3.6, also drew praise for their focus on promoting Austin’s culture.

During last month’s roundtable meeting, a consistent concern from community members was voiced about a lack of outreach from many of the developers during the planning stage.

Darnell Shields, executive director of Austin Coming Together, said he had heard concerns both about how much the community was engaged by developers during their planning process and the lack of explanation on how the city would ensure developers stay engaged with the community once the project starts. Shields said he shares those concerns.

“What is the city’s intention around actually designing how this requirement for the community engagement will actually be put into effect in a way that holds these applicants accountable … to the community?” he asked.

Shields said while there are defined processes and requirements for financing and other aspects of the development, the requirement for community engagement is undefined.

“There’s not a process for the community to hold [the developer] accountable to,” he said. “That’s an issue.”

Lassiter responded by saying “the winner is expected engage in much more substantial community engagement than what could occur thus far.”

The winner will be expected to connect with community stakeholders, like Austin Coming Together, to ensure the community has a voice in shaping the process, he said.

Deputy Commissioner Pete Strazzabosco said in an interview that “community input helped create the RFPs. Community input is going to help select the winning respondent, and it will further refine the winning proposal.”

The selection of a finalist is not the end of the process, Strazzabosco said. Once a finalist is announced, the proposal must wind its way through a lot of city departments.

The Landmark Commission, Chicago Plan Commission, multiple City Council committees and the City Council itself will all be reviewing the finalist’s proposal for developing the site. There will be opportunities for public input throughout the process, Strazzabosco said.

It’s expected work on the project will begin before the end of the year, he said.