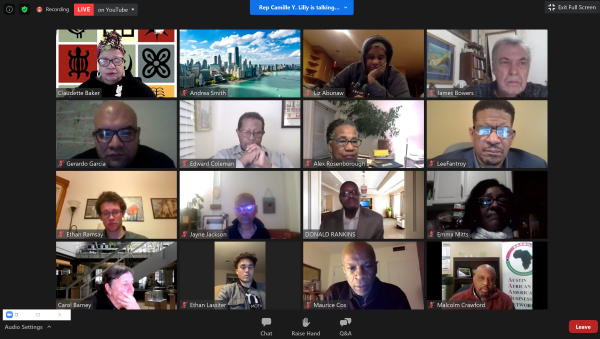 At two community roundtables last week, residents expressed concerns about how developers will engage the community, as well as how the proposed projects would benefit Black residents and grow wealth in Austin.

The meetings, held Jan. 19 and 20 and hosted by the Chicago Department of Planning and Development, gave Austin residents a chance to learn about and ask questions of the seven developers who had responded to the request for proposals to develop the Laramie State Bank building and five adjacent lots.

The historic Laramie State Bank building was built in 1929 and designated a Chicago Landmark in 1995. It has been owned by Austin residents John Young Sr. and Earline Ruffin since 1994, as reported by Austin Weekly News.

The RFP was released in August and is part of INVEST South/West. In a summary of the proposals, the city said projects need “to create opportunities for local wealth creation” through the participation of local developers and business tenants, and provide “local property ownership opportunities.”

At both roundtable events, there was widespread concern over ensuring developers were including community members in their plans.

Aisha Oliver, executive director of Root2Fruit Youth Foundation and an Austin resident, said, “What we usually see as residents of Austin is that the engagement isn’t there … ultimately, our voices need to be heard before and not after something is done.”

She asked AJ Patton from 548 Development who specifically, aside from elected officials, they had reached out to in Austin.

Patton declined to name anyone but said they are “open to engage with everybody” and had “reached out to a boatload of non-profits.”

Their “mission is to create jobs in equity,” and 548 has experience doing just that with Black businesses, Patton said.

During the second roundtable, Ald. Emma Mitts (37th) said she wants developers who “have some ties to the community, in order to be able to work together, united.”

Ald. Mitts said she, and the community, want to see investments that will last and help build the neighborhood.

Her comments came after Jupiter and Sumac’s presentation. Roy Donoso, president at Sumac, said their team had not reached out to any Austin stakeholders when developing their proposal and didn’t have specific plans for generating wealth in the community beyond ground-floor retail space.

One attendee, identified as Jose A., said in the chat, the firm was “clearly disconnected.”

Residents were also interested in how the projects would both benefit and reflect the Black community in Austin. The neighborhood is 79% Black, according to the 2020 community data snapshot.

Part of their proposal includes a mural to tell the African American story, she said it would be for “everyone to participate in and to say, ‘Here’s what I’ve experienced.’”

Holsten said their goal is to “help you create the end result of your dreams, not our dreams.”

Attendees wanted to know about developers’ plans for growing wealth in Austin.

Many of the development teams include non-profits. One attendee’s question for the Oak Park Regional Housing and Heartland Housing Alliance team, read by meeting facilitator Claudette Baker was: “[If] a non-profit owns the building, does that mean you will not be paying taxes to help support and increase the tax base in the community?”

Athena Williams, executive director at the Oak Park Regional Housing Center, said they understand taxes are a wealth building mechanism for the community and if her development team wins, “taxes will be paid on the property.”

WHA’s approach is: “Buy this equity in your neighborhood rather than wait for when you’re priced out and a different demographic comes in,” he said. People can start off renting, but ultimately, WHA wants them to buy a home and stay in Austin.

Over the next six to nine months a winning developer will be selected, with the community’s feedback taken into consideration, and negotiations for purchasing the building and adjacent land will begin, city officials said.