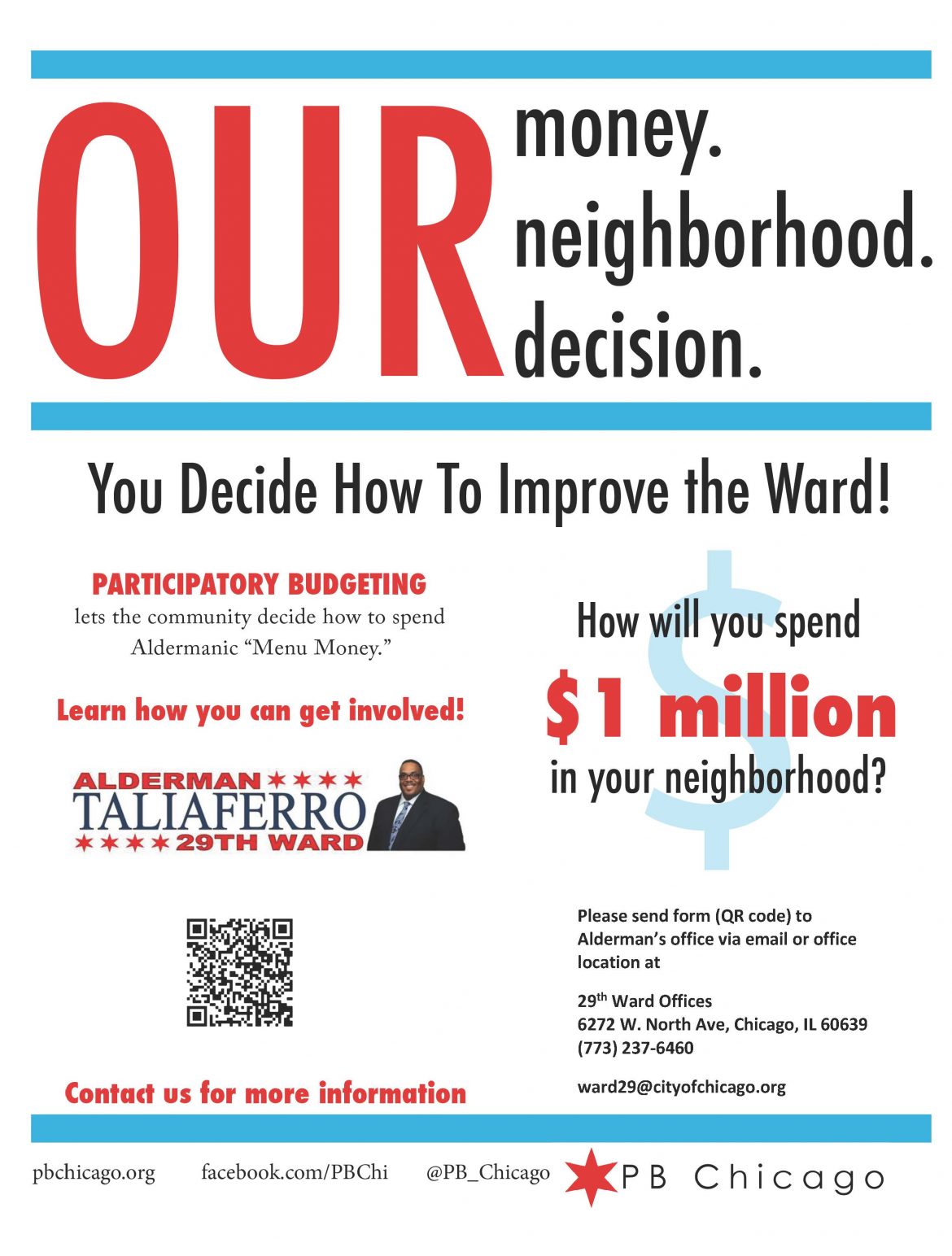 Resident of the 29th Ward will soon have the opportunity to vote on how they’d like $1 million in participatory budget money spent.

This is the third time under Ald. Chris Taliaferro, now in his second term, that 29th Ward residents have had a say in how the so-called menu money will be spent.

This year’s proposals include installing bike lanes along sections of Roosevelt Road and Austin Boulevard; painting a mural in Columbus Park; putting up community identifiers on light poles in the north part of the ward; and various street, alley and sidewalk repairs throughout the ward.

Norma Hernandez, a community development planner who works for UIC’s Great Cities Institute, which administers the participatory budgeting program in Chicago, said the goal is for residents to be able to vote before the end of January.

The city’s deadline for voting to conclude and selected projects to be submitted is March, Hernandez said.

Last year, voting ran from Nov. 6-20; this year, it’s been delayed by the pandemic.

Tom Drebenstedt, who leads the team representing the north third of the 29th Ward, which spans Roscoe Street to North Avenue, said he wishes residents were already voting.

But due to the pandemic, “of course, this year is different,” he said.

The other two parts of the ward are led by Maria Sorrell (the central section, which runs from North Avenue to Lake Street) and Tina Augustus (the south section, which stretches from Lake Street to Roosevelt Road).

Participatory budgeting gives ward residents a say in how some of the menu money allocated to each of the city’s 50 wards receives every year is spent. One of the program’s primary goals is equity – ensuring funds go to areas most in need.

Sorrell is concerned about that equity in the 29th Ward.

She said in past participatory budgeting cycles the north section has received a much bigger portion of the money than the central and south sections of the ward.

PB Chicago’s website shows last year the north section received $160,000 for projects, while the central and south areas received a combined $176,800 for their projects; the north part of the ward received 47.5% of the available funds.

Because the north area has such high turnout for voting on participatory budgeting, their projects tend to get a lot of the menu money, Sorrell said.

Hernandez agreed, saying it comes down to where those who vote live in the ward. So far that has been the north, in particular Galewood. Last year, 330 residents across the ward voted, down from the 390 who voted in 2017.

She’s worked with Sorrell to increase voter turnout in the central and south areas of the ward. They set up a table at the Austin Town Hall’s City Market on two Thursdays to talk to residents and collect ideas as well as distribute information about participatory budgeting.

Hernandez said they were able to talk to about 30 residents.

The ballot will give residents the option of spending anywhere from 60% to 100% of the funds on street resurfacing.

Hernandez said they’ve opted to start the street resurfacing amount at 60% because studies have shown people tend to vote around that level for these types of projects.

Hernandez said this type of voter involvement is part of a larger movement toward increased participatory democracy.

Participatory budgeting started in Brazil in 1989 as a response to the authoritarian government. Hernandez said when the process came to the U.S. about a decade ago, Chicago was the first city to implement it.

Of the city’s 50 aldermen, only nine currently participate in participatory budgeting, according to the current projects section of PB Chicago’s website. The 36th Ward is the only other West Side ward participating.

An aldermen’s participation in participatory budgeting is completely voluntary. “We’re not paying them, they don’t pay us,” Hernandez said.

Augustus said having participatory budgeting in the 29th Ward is important because it gives residents a voice to make change in their community.