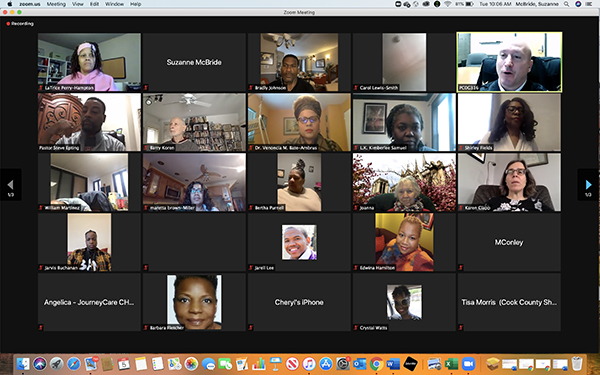 The record number of opioid-related deaths in Cook County last year means far more people need to be trained on how to reverse overdoses, says Charles Brown, a member of the West Side Heroin and Opioid Task Force.

The task force wants to make sure people know how to stop someone from overdosing, including using Narcan, a medication that blocks the effects of opioids.

There were 1,599 opioid-related deaths in 2020, according to the Cook County medical examiner’s office. And the final number could end up topping 2,000 once pending toxicology reports are finalized, the Chicago Sun-Times reported last week.

Overdose deaths – which include fatalities linked to drugs like heroin, fentanyl and pain killers – have been steadily increasing since 2015 when 647 opioid deaths were reported.

“It’s so important now because nationwide (and locally) we’ve experienced more overdoses than any time in our history,” said Brown, an adjunct psychology professor at Richard J. Daley College and a contract tracer.

Speaking this week at the monthly meeting of the 15th Police District’s faith-based leaders, Brown urged attendees to take the free training he offers. The training is available on Zoom – rather than in person – because of the pandemic.

Brown’s own brother overdosed nine times in one year, but he hasn’t overdosed since. And a very good friend of Brown’s overdosed in the basement of their church as services were being held.

Pastor Steve Epting, senior pastor of Hope Community Church, said he found the training to be informative and helpful, especially for people of faith who want to help church members struggling with addiction and/or mental health issues.

The Chicago chapter of the National Alliance on Mental Illness (NAMI) has been offering its own training to faith-based leaders across the city.

The free two-hour training covers the signs and symptoms of mental illness, and how to talk about mental health, says Kasey Franco, chief education officer for NAMI of Chicago.

More than 500 faith-based leaders have completed the training over the last five months, she said, and the goal is to train even more.

“We know that many people go to their faith communities when they’re struggling with their mental health,” Franco said.

Pastor Epting said it’s so important for faith leaders to build their skills in this area, especially at this time when dealing with stress and maintaining mental wellness is so critical.