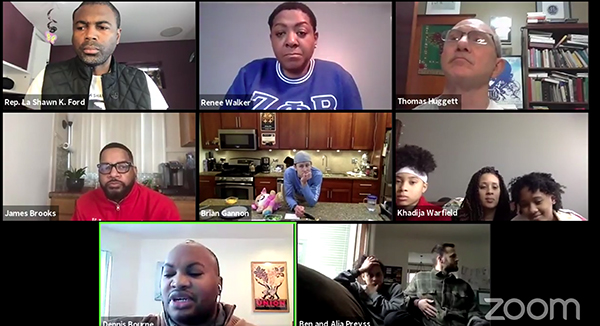 Sponsored by state Rep. La Shawn K. Ford who partnered with Lawndale Christian Health Center, the event paid tribute to Dr. King’s legacy and informed participants on how to maintain a healthy lifestyle.

Pastor James Brooks began this week’s event by recounting the mass migration of Black southerners during the 1950s and 60s who moved north to cities like Chicago, citing his own family’s Mississippi heritage.

Upon escaping the Jim Crow South, they discovered racism also happens in the north. Brooks said when they arrived in places like North Lawndale, they experienced redlining, denial of loans, white flight and missed career opportunities.

In 1966, Dr. King moved to North Lawndale to bring attention to the housing disparities between Black and white communities. “Leadership understands the power of proximity,” Brooks said. “The shepherd ought to smell like sheep.”

Three years later, the civil rights leader was assassinated, sparking violent riots across the country and on Chicago’s West Side. The effects of the riots are still seen today.

The event also stressed the importance of staying healthy during COVID-19. Dennis Bourne, director of behavioral health at Lawndale Christian Health Center, called COVID a unique, long-term and pervasive stressor because of its threat to people’s health and livelihoods.

One’s mental health can also be strained by the coronavirus, so Bourne advised participants to get connected socially (and safely), balancing the amount of social media they’re taking in and maintaining a routine. These all can keep stress down.

If someone is more irritable, having difficulty sleeping or controlling emotions, or suffering panic attacks, these aren’t signs of regular stress but anxiety, Bourne said.

Bourne said expressing emotion is the first step to managing them. He ended his message by quoting Dr. King, saying, “The problems of life will begin to overwhelm you; disappointments will begin to beat upon the door of your life like a tidal wave. And if you don’t have a deep and patient faith, you aren’t going to make it.”

Dietician Charlie Gannon talked about the significance of nutritious eating. She demonstrated how to make tacos and traditional taco alternatives along with her husband, Brian, and two of their children.

Gannon said it can be difficult to include enough vegetables in your diet, and encouraged participants to do so.

To motivate yourself to stay active, he described these incentives: