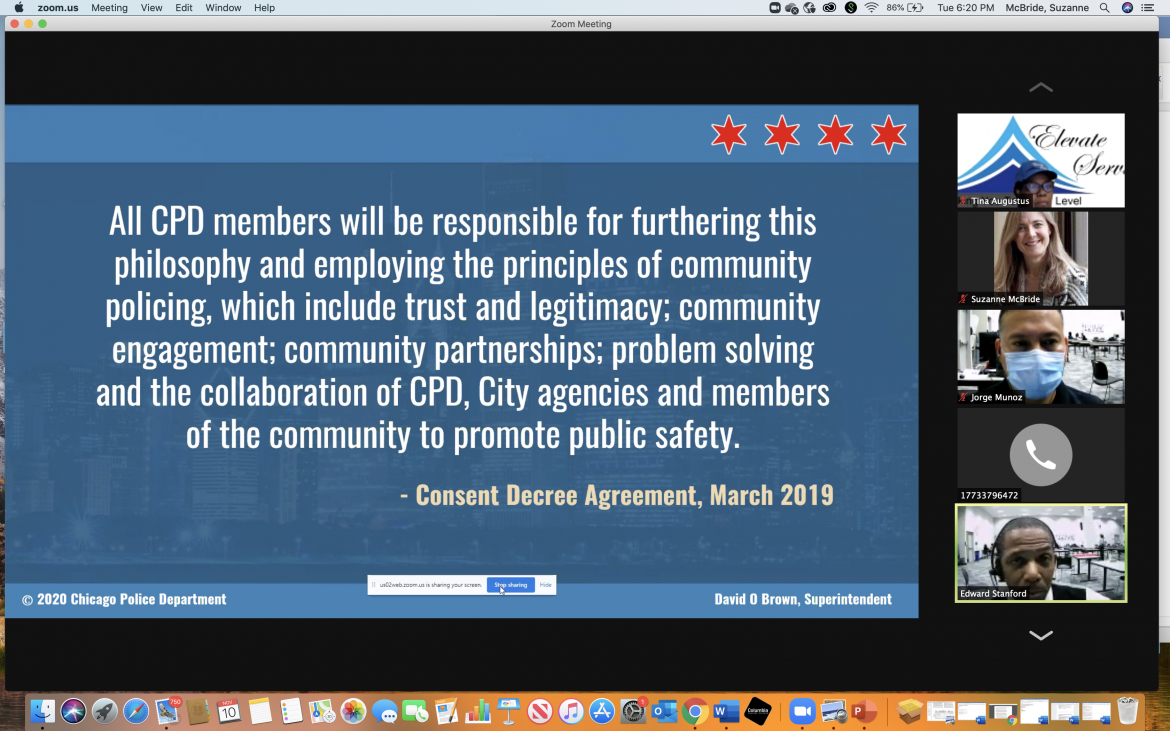 Raising mental health awareness, supporting businesses and youth, reducing gun violence and dealing with abandoned lots were some of the topics discussed at a meeting hosted last week by the Chicago Police Department’s 15th District.

The meeting – held via Zoom and attended by about 50 people – was the second of two “community conversations” the police department is holding as it crafts a strategic plan for 2021. Each district is coming up with a plan as part of the consent decree the department signed in March 2019 with the U.S. Department of Justice.

“Poor mental health has been part of our community for a long time, a very long time. And with the pandemic, it shined a light on it, and people started talking about it in a different way,” said Milton Johnson Jr., assistant to the president/CEO for community relations at Bobby E. Wright Comprehensive Behavioral Health Center.

Sgt. Jermaine Harris said the 15th District is working to provide resources for those dealing with mental health issues.

There is not a lack of resources, said Austin resident Deborah Williams, who is a community outreach and engagement specialist at Habilitative Systems Inc. “It’s just that people don’t know where the services are.”

“You’d think people would be breaking the door down to get in, but that’s not the case. We have to educate people,” said Williams, who notes the center has five beds and is open 24 hours a day, seven days a week.

Johnson said he wished years ago when he was suffering from depression the triage center had been there for him. He said many residents who have experienced stress in recent months may not even realize how it’s affecting their mental health.

A few years ago there wasn’t very much conversation about this, Johnson said. “Now we’re beginning to recognize how important mental health is. … It’s OK to not be OK.”

Barry Koren said a lot of people are isolated from one another.

“We need to find a way to connect with each other in an ongoing way and be productive in terms of helping each other,” Koren said. “There are so many services in our community that are not being fully utilized.”

Others talked about the value of community events and activities, like the 100 blocks/100 churches initiative and the annual 5k run/walk that had to be cancelled this fall because of COVID-19.

Community members want churches more involved, Sgt. Harris said. And one way to do that is through 100 blocks/100 churches, a years-long initiative where various churches have their members stand on corners across Austin on Wednesday evenings throughout the summer. “They have a presence and offer fellowship … It’s about consistency,” Harris said.

It also gives the community a chance to see law enforcement walking alongside or even behind residents; it’s a way for police to show up when there’s not a problem and allows the community to see police in a different way, another attendee said.

Charles Anderson, principal of Michele Clark Academic Prep High School, said he would like to see 100 blocks/100 churches extended to weekdays while schools are in session. “The more our kids grow up and aren’t afraid and feel they have a relationship” with the police, the better, he said.

Williams said all officers, not just those who work in community policing (CAPS), need to be in the community and as well educated about the community as CAPS officers are.

“They’ve got to see and get to know people in the community,” she said.

Sgt. Harris said there’s been a push to get officers who aren’t CAPs officers involved in the communities in which they work, but that has been stymied by COVID-19.

What’s critical is that police and residents get to know each other and develop meaningful relationships, said Pastor Steve M. Epting Sr. of Hope Community Church.

“Until we create real relationships none of it really works,” Epting said adding that it’s not about a program or an event … “it’s developing relationships over time.”

Bradly Johnson, director of external affairs at BUILD Chicago, asked how the annual event could be bigger, like the races held along the lakefront, and said bigger numbers could attract more sponsors.

One major benefit of the race/walk is that people beyond Austin’s borders see well-kept lawns, no trash on the ground and a community coming together, Johnson said.

“It gets people to see our community that is a lot different than what they (see) on the news. … It draws attention to our assets.”

Epting agreed, saying it’s a good way to promote Austin. “It should be a great event. We should have thousands of people.”

Principal Anderson said each year, more teachers from Michele Clark sign up for the run/walk. Before this year’s event was canceled, he hoped to encourage more participation by setting up friendly competitions among teachers and staff.

He wants teachers who don’t live in the community to take part in order “to open up their eyes to all the beauty that Austin has.”