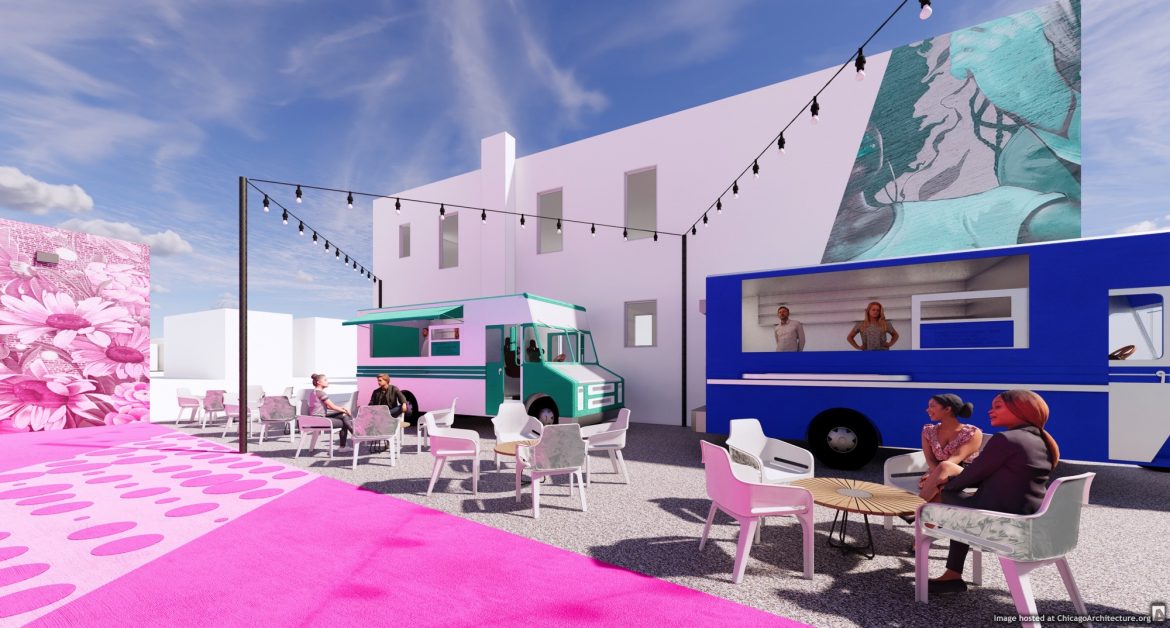 Rendering of Pop Courts (via The Lamar Johnson Collaborative)

An empty lot at Chicago and Lockwood is being transformed into a colorful space for residents and businesses to enjoy.

Partnering with Austin Coming Together, architecture and design group Lamar Johnson Collaborative (LJC) is working closely with the Austin community to make the underutilized corner a place the neighborhood can be proud of.

Inspired by vibrant pop art such as work by Keith Haring, the project is fittingly named POPCourts.

The project is a collaboration between the Special Service Area 72 Austin Chicago Avenue Cultural Corridor, the Westside Health Authority, United Way of Metro Chicago and the Chicago Department of Planning and Development.

Once finished, the lot will have a basketball court, a plaza for pop-up markets, a lawn for seating, a spot for food trucks and a mural painted by local artists.

The new space will host the 40 Acres Fresh Market, provide overflow seating areas for nearby restaurants and serve as a place for residents to sit and relax, according to the Austin Weekly News, which covered last month’s ground breaking.

The Austin Weekly News Austin reported that artist and community organizer Vanessa Stokes, who manages SSA 72, wanted to do something with a vacant lot, and the city’s planning department was looking to create community meeting spots as part of the INVEST South/West initiative.

“I’m hoping that people will start to see that we can support businesses along our corridors on the West Side,” Stokes told the Austin Weekly News. “I think people think it’s hard for things to happen here and it’s not really that hard once you have the community engagement.”

In an interview with AustinTalks, Stokes noted she’s quite familiar with the corner of Chicago and Lockwood as her family lives just a block away.

Stokes got the idea to use the space for outdoor seating after last summer’s social unrest put a spotlight on what things Austin was lacking. She was able to secure funding from the Department of Planning to create the space.

In partnership with Paint the City, Stokes is working on a mural alongside artists Missy Perkins and Barrett Keithly to display on the east-facing wall. What the mural will depict is going to be a surprise, Stokes said.

Lamar Johnson Collaborative has done other work in the area. One ongoing project is at a former CPS elementary school on Madison and Central that’s being restored into a workforce innovation center.

Lamar Johnson Collaborative is also involved with a group of architects and designers called All Reimagined Chicago that’s working on COVID-relief design efforts throughout the city.

Max Komnenich, the lead designer on POPCourts, noted how other, more affluent neighborhoods in Chicago have been able to close off streets for dining and farmer’s markets. Austin hasn’t had the same luck during the pandemic.

Komnenich said one of the main reasons he wanted to go into architecture was to make spaces for people to be able to elevate what they already do.

“I think if you don’t have that resource of a space that supports your vision and your life goals, you’re hindered. We can actually make a space that makes it easier to accomplish our goals and easier to live our lives to the highest and best use – I think that is the power of architecture.”