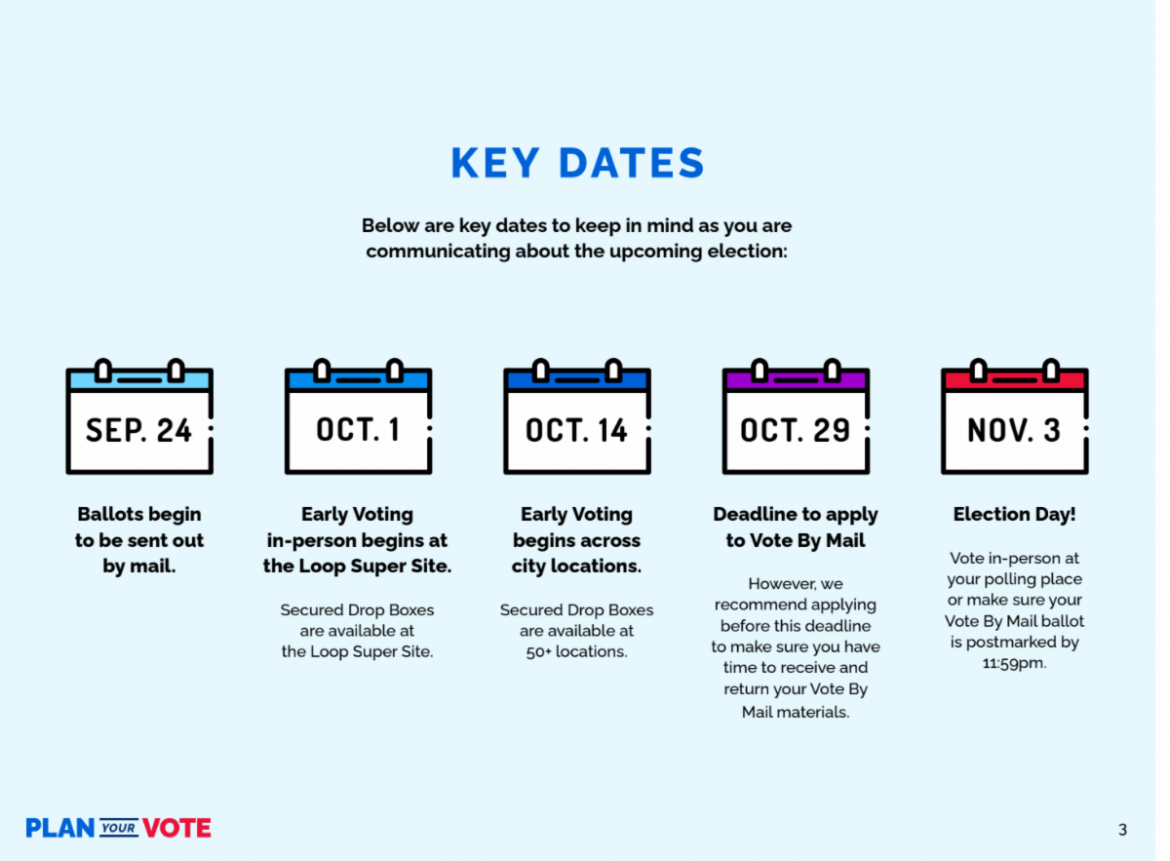 Vox reports that as of Oct. 23, more than 51 million people have already voted nationwide, with just over a week left until Election Day.

The U.S. has already hit 76% of total 2016 early voting. Even with so many
ballots already cast, it’s not definitive that unprecedented early voting will translate into voter turnout to exceed the historically high number of votes cast in 2016: 139 million.

It’s possible that when the dust settles after Nov. 3rd, the number of Americans who voted will be similar to numbers in previous presidential
elections, though they used different methods.

Nevertheless, voting this year is more important than ever.

What if you haven’t registered to vote? Same-day registration services are available at every Early Voting site – the West Side locations are:

Two forms of ID, one of which shows the voter’s current address, are
needed to register for the first time or to file a name change or an address update. You can register up until Election Day.

What about Early Voting? Some people want to vote early to avoid long lines, potential confusion or disruptions on Election Day. According to the Chicago Board of Election Commissioners, Chicago voters may use any Early Voting & Registration location in the city: at the Loop Super Site at 191 N. Clark St., and now, at the 50 Ward sites.

Chicago voters may use any Early Voting location in the city. For the first time in history, Chicago’s Union Station is serving as a polling location, built for suburban commuters to vote.

Any ballots that voters cast in Early Voting are final.

Government-issued photo ID is not required but is helpful if there is a question about the voter’s registration, address, signature, or if there are two voters at the same address with the same names or similar names.

What about Vote by Mail? In March 2019, even before the coronavirus pandemic, I introduced legislation that authorized voters to have access to a vote by mail ballot for the 2020 elections, and a version of that
legislation became law.

Due to COVID-19, voters are encouraged to use Vote By Mail or Early Voting before Election Day. Statewide, the number of applications for mail ballots is just shy of 2 million, at 1,998,624 requests.

Many people have already received a Vote By Mail ballot. According to the Illinois State Board of Elections, the state is on track to have 25% to 30% of the vote cast by mail-in ballots.

What if I don’t want to mail my Vote by Mail ballot? You can drop off your Vote By Mail ballot at a secure lock box at any Chicago early voting site. Secured Drop Boxes will be available at every Early Voting site for any Chicago Vote By Mail voter to submit the signed and sealed Ballot Return Envelope.

Every voter is encouraged to wear a face mask that covers the mouth and nose, whether visiting to use in-person Early Voting or to use a Secured Drop Box. Voters in line must practice social distancing with 6 feet of space between each person in line.

Let’s all vote – either early or on Election Day!