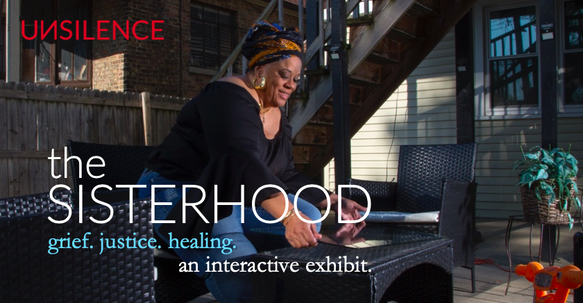 Englewood resident Gwendolyn Baxter was photographed in her backyard, a place that brings her peace. She’s sitting in the center of the image smiling and looking down at a glass table that shows the reflection of her hands.

Chicago photographer Cecil McDonald, Jr. captured serene moments of Baxter and 10 other women who are part of a new exhibit featuring members of The Sisterhood Action Support group.

Baxter founded the group in December 2015 to support grieving mothers who lost their children to gun violence and take action.

Baxter feels an obligation to share her story. When her 23-year-old son, Larry, died in December 2003 Baxter didn’t want his death to be in vain. She wanted to let the world know her child existed.

She hopes to galvanize people to take action against gun violence. Victims of violence are not just those that lost their lives; the trauma extends to their families and entire communities.

“We want to be a voice for our children. We want to keep their names alive. We want people to know that they existed. … I’m an action person. I believe in speaking out, doing outreach and trying to make policy change,” she said.

In collaboration with the non-profit Unsilence, the interactive, online exhibit premiered this month; it highlights the mothers’ stories and touches on themes of grief, justice and healing.

“I think we become very desensitized to the violence in our city,” Cohen said. “Part of that desensitization is because the stories are told in a very removed way that doesn’t reflect the reality of the family and the victims left behind.”

Through short stories told by the mothers, viewers of the exhibit have a chance to learn something about their sons. South Side resident Toneya McIntosh recounts her son Tony’s love of dogs in “All Kinds of Dogs.”

Baxter’s vignette titled “Birthday Candles” shares how much her son Larry liked playing pranks on people, like buying candles that can’t be blown out.

“What we do in this exhibit is not only humanize their children but draw attention to the pain that these mothers experience when their children are misremembered or put in a box that doesn’t reflect who they really were.” Cohen said.

Andrene Wright, a PhD student studying political science at Northwestern University, helped curate the exhibit. Her work focuses on the intersection between race, gender and class with an emphasis on the Black female experience.

She said The Sisterhood exhibit illustrates the nuances in the Black female experience by showing different ways the mothers process grief and justice.

She cites two stories – one from a mother who felt being in court with her son’s murderer was too difficult, and the other from a mom who didn’t get to go through the judicial process and has never seen justice for her son.

“It shouldn’t just be the burden of these mothers to carry on these stories and make changes; it should be a responsibility for all of us,” Wright said.