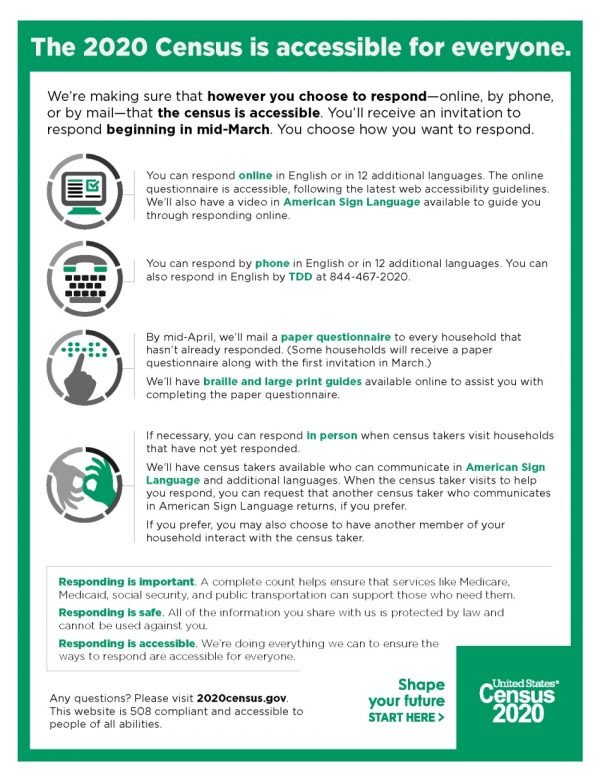 There’s a lot at stake for Adam Ballard and Horacio Esparza.

The two Chicago-area men are disabled and rely on programs whose funding is determined by how many people get counted every 10 years in the U.S. Census. If fewer people get counted this year, that means less funding over the next decade for vital services they and millions of other Americans need.

Ballard, a housing and transit policy analyst for Access Living, relies on a personal attendant two to three hours a day, seven days a week. The father of two is lucky; he has family who could help him with his personal hygiene and other needs, but many other people with disabilities aren’t as fortunate.

“If the amount of federal money goes down … there’s going to be real threats that services could be cut,” said Ballard, who fears people with disabilities could lose hours of vital help they need each day to live independently – and some people could be cut from government programs altogether.

The fear of service cuts for Austin residents is especially acute because “disinvested communities – communities of color, the disability community – we have the most to lose,” Ballard said.

Esparza, the executive director of the Progress Center for Independent Living, worries he – and the hundreds of people who contact the center each year – won’t get the services they need to live on their own.

“For many decades, we’ve been able to make the world more accessible” for the more than 500,000 Chicago-area residents living with a disability, said Esparza, who is blind.

Nationwide, nearly one in four Americans have some type of disability, making this community the largest minority group in the United States and one that crosses every ethnic and racial line.

“We don’t want to be left out,” Esparza said. “It’s important for us to be counted, so we can get the services we need.”

Those services include transportation like PACE, which enables people with disabilities to get to work and do their shopping, and vouchers that help some pay for affordable housing.

For every person that goes uncounted, $1,800 on average will be lost each year through 2030, says Alex Perez-Garcia, associate director of development and communications for ADA 25 Advancing Leadership.

That lost funding could affect every facet of a disabled person’s life, whether they’re seeking training to get a job or needing accessible sidewalks to get around in their wheelchair.

And their not the only Americans hurt by an undercount: Able-bodied people also suffer if there’s less money for education, transportation, housing, health and many other programs that are funded based on census data.

“There is billions of federal dollars at stake – money that will affect our livelihood and how we live in our communities,” Perez-Garcia said.

There’s little time left to participate in the 2020 census; a federal judge extended the Sept. 30 deadline to the end of October, but the Trump administration is insisting Monday, Oct. 5 is now the deadline. Advocates for the disabled are urging anyone – disabled or not – who has not completed the form to do so ASAP.

There are several ways to still be counted, said Kira O’Bradovich, senior partnership specialist in the U.S. Census Bureau’s Chicago office: online, by phone, on paper, at your door if a census worker comes knocking, or at “pop-up” sites outside grocery stores and other sites.

The goal is to get every person counted, especially those officials consider to be hard to count. At the top of that list are people with disabilities and people of color, making Austin a neighborhood advocacy groups have been targeting for months now.

Every afternoon, Anita Banerji, director of Forefront’s Democracy Initiative, checks the daily updates on the Census Bureau’s web site to see how the count is going in areas like Chicago’s West and South sides. And what she sees concerns her: The response rate for all of Chicago as of Thursday was less than 60%. You can check your neighborhood here.

Census tracts that are predominantly Black and brown are down compared to 10 years ago; several parts of Austin are well below 50% participation at this point.

These numbers aren’t surprising given the COVID-19 pandemic and massive loss of jobs that has hit communities like Austin particularly hard, Banerji said. “The census is the furthest thing from their mind.”

But if the count is down even 1%, that means millions of dollars in lost funding across Illinois for years to come, she said.

“This was supposed to be the decade when we were going to lift up all our under-represented  populations,” Banerji said. “With lower response rates, we’re not going to have accurate data to do justice by our communities.”

Some people in the disabled community have asked why it’s so important they be counted and note the census form doesn’t include a disability question.

Perez-Garcia said it very much matters: “Even though it’s not being asked, that doesn’t mean that our voice and our count isn’t needed. In fact, it is needed.

“This is an opportunity to be heard, to be counted, to be civically engaged. This is a unique moment for the disability community. … We deserve to be counted, regardless of citizenship, age and legal status because our lives really do depend on it.”

Because there’s no question about disabilities on the census form, Hudson said sometimes there’s no real urge to fill it out, and she hears: “Oh, I’m not represented on this form? I don’t need to worry about filling it out, right?”

Her response: “This is still super important.”

Completing the form can be challenging for people with disabilities. Hudson, who’s visually impaired, said she completed the form online so she could use a magnifier tool on her PC to read the questions in a larger font.

The hearing impaired can use the Census Bureau’s TTY/TDD line. But Hudson said it’s an outdated system, and many people don’t use TTY technology anymore; they use video relay services instead.

Hudson said while it’s great the bureau is providing accessible technology, they could have made it more accessible with video relay services.

“That’s very apparent if you maybe look at tribal land or sovereign nations across the United States, so then their only option is to this paper questionnaire. And then how then is someone who is blind supposed to do it?” she said.

Hudson said she supports the Census Bureau’s increased efforts to be more inclusive with the 2020 census, but “sometimes, unfortunately, people with disabilities are forgotten in this process.”

This story was completed with support from Reveal’s Seeing 2020 Census Reporting Collaboration.