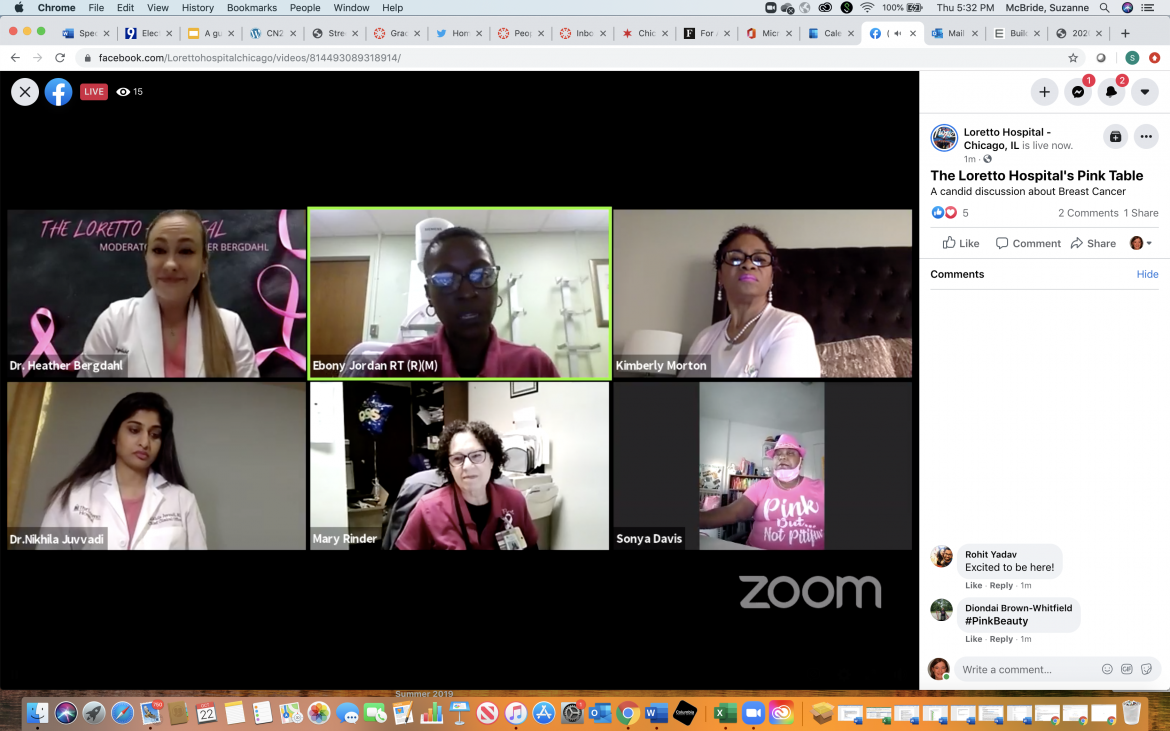 Sonya Davis is diligent about getting a physical, flu shot and mammogram every year. But in 2014, when she realized she had missed the mammogram, she wasted no time in getting to the doctor for her screening.

At 39, Kimberly Morton had not yet had her first mammogram when she felt pain while stretching her hand. Initially, a health professional told her not to worry, but Morton persisted, finally going to another hospital to be screened.

Both Davis and Morton got the news that one in eight women receive at some point during their life time: They had breast cancer.

Morton’s tumor was small; she had a lumpectomy, then chemotherapy and radiation. She’s been in the clear for 16 years.

Davis was “blessed” – she didn’t need chemotherapy or radiation but did have a mastectomy. She’s been cancer free in one breast for 20 years, and 12 in the other.

The women shared their stories last week as part of a virtual webinar organized by The Loretto Hospital, where Austin residents who are uninsured or underinsured can get a free mammogram through the end of October.

Dr. Nikhila Juvvadi, the Austin hospital’s chief clinical officer, said women in the U.S. are diagnosed with breast cancer more than any other cancer; and it’s the second deadliest form of cancer for women, second only to lung cancer.

If you’re diagnosed with invasive breast cancer, there’s more than a 90 percent chance of survival. “But you have to get diagnosed.”

Davis, who works as a counselor and has published a book about her experience titled “Pink But Not Pitiful,” urged women to get their mammograms – every year or every two years, whichever their doctor recommends.

“The earlier you get it done, the better your results will be,” said Davis, who noted her breast cancer was caught early even though she had skipped her annual mammogram.

Morton said she lives with the fear the cancer will return. Recently, she had a scare; she had lost weight (more than 100 pounds), which concerned doctors. She had both a mammogram and ultrasound, but it turned out to be nothing.

She sees it as her mission to share her experience. “I knew that God had me … that it wasn’t going to be a death sentence.”

Women need to take care of themselves, Morton said. “Pay attention to your body.” Though she has lost weight and is healthier, “it’s a constant battle. It’s a battle that we can all win, but we have to be dedicated and try.”

Dr. Juvvadi said if a woman notices pain or just doesn’t feel right, she shouldn’t feel ashamed or think it’s not a big deal. “Go to your doctor. … Make the doctor listen to you. We’re there to guide you on the science.”

For more information about getting a free mammogram in October at The Loretto Hospital, call 833-THL-LOVE.