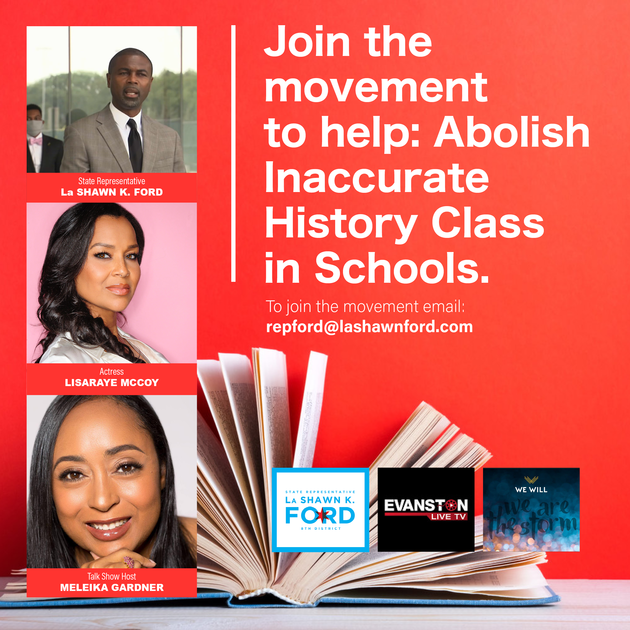 Alarmed that traditional history teaching has failed to provide students with a comprehensive education that includes the perspectives of marginalized communities, state Rep. La Shawn K. Ford on Friday unveiled his proposal to update the state’s history curriculum.

“To the detriment of many, the teaching of history has often been viewed through the lens of one perspective,” Ford said.

“This limited narrative has rarely taught our children about the marginalization of women, people of color, persons with disabilities and other minority groups.”

Over the summer, Ford said he worked with a diverse group of stakeholders to put together a legislative proposal that can immediately begin to update our teaching standards.

Ford’s plan would establish a commission to review and update the state’s history curriculum so that textbooks, class discussion and other course material more accurately reflect history through the inclusion of diverse perspectives.

With certain credit exceptions, under Ford’s proposal, schools would shift to civics teaching instead of history teaching during the 2021-22 school year until recommendations from the commission are implemented. The commission would be expected to complete its work by the end of next year, with new curriculum fully adopted by June 30, 2022.

Ford has been an advocate for strengthening history curriculum, previously introducing House Bill 4954 to expand instruction regarding pre-enslavement Black history and the American civil rights renaissance.

At a press conference held at the DuSable Museum of African American History, its president, Perri Irmer, said education and knowledge are the No. 1 cure for bigotry.

Rep. Ford said history lessons as they are taught now are rooted in white privilege and spread misinformation.

“We have to reverse the damages and effects of the traditional historic narrative that fails to account for all of us,” NBC5 reported Ford as saying.

Before Friday’s press conference advocate Meleika Gardner of We Will said it would speak volumes if lawmakers voted for both of Ford’s proposals.

“Both of these bills will build better race relations starting at the kindergarten grade level because they will come to understand and respect each other’s identity in this nation,” Gardner said.

American history text books portray caucasians as the only heroes and inventors who built the United States, she said.

“We know that this is not true. Black people, Native Americans, Latinx, women, the Jewish community, etc. helped to build this country.”