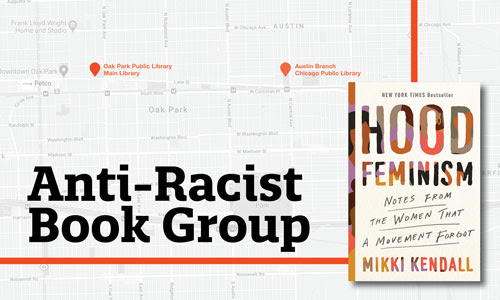 Earlier this fall, as Danielle Morales-Klima was reading “Hood Feminism: Notes from the Women That a Movement Forgot,” by Mikki Kendall, she asked in a Facebook group for progressive women of color in Oak Park if anyone would be interested in forming an anti-racist book club with her.

“My phone practically melted by how excited people were,” she said.

Morales-Klima, who lives in Oak Park, said it was a natural step to bring both the Oak Park Public Library and Chicago Public Library’s Austin Branch on board.

Jo-Anne Willis, branch manager for Chicago Public Library’s Austin branch, said Morales-Klima was the one who deserves “all the props” for getting the book club started and bringing the two libraries together.

Willis and branch associate Charmaine Bryant will be hosting Wednesday’s discussion – the first of several planned.

Morales-Klima reached out to David Seleb, the Oak Park Library’s executive director, and to Willis to suggest starting the book club.

Before the pandemic, Morales-Klima and a friend had helped start a friends of the Austin Library nonprofit. They were working on starting a free or low-cost bus service to shuttle people to and from the library, she said.

Alexandra Skinner, the manager of adult services for the Oak Park library system, said they are always looking for opportunities to partner with other libraries and particularly with the Austin branch because they’re so close.

“We were really excited about it,” she said.

Both librarians said participants don’t need to have read the entire book.

Skinner said even if people have read part of the book or just perused it, “If you have an opinion on the book, on the writing, on the topic, and as long as you’ve read some of it, you don’t mind spoilers, it’s OK to join the discussion.”

Morales-Klima said the discussion component is what makes the book club anti-racist.

Being anti-racist means not only saying, “I don’t hate this group,” she said, but being able to say, “I have taken some time to figure out what they’re going through and educate those around me.”

Morales-Klimas said she hopes the book group’s conversations can start breaking down the barriers and the stark divide she sees between Austin and Oak Park.

“I hope that one day you kind of drive down Austin [Boulevard], it doesn’t feel like it’s any different if you look from the left to the right.

“I think that sometimes we underestimate what a conversation could do,” she said.

Morales-Klima is also organizing an online Q&A session with Kendall, the author of Hood Feminism, hosted by the Oak Park Library. They’re hoping to hold it Nov. 9 or 10, but are still solidifying the date, she said.

The second meeting of the book group will be held Dec. 2 to discuss Ibram X. Kendy’s book “How To Be An Anti-Racist.”

Anyone who is interested in the book group can register here; the meeting will run from 5:30 to 6:45 p.m. Wednesday.