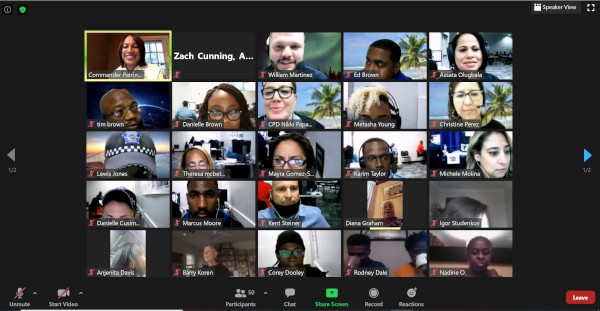 At a community meeting last week, West Side residents called for increased transparency and said police needed to develop better relationships with youth and the community.

The Oct. 8th meeting, hosted by the Chicago Police Department’s 15th District and Commander Patrina Wines, followed the same format being used by the city’s 22 districts as they gather information for 2021 strategic plans.

After a general information session, the nearly 80 participants broke into 10 breakout rooms on the Internet.

AustinTalks was placed in room nine, which was led by Officer Theresa McBeth, a youth officer from CPD’s 11th District.

Much of the room’s conversation revolved around the need for increased transparency in policing.

Attendees expressed frustration about not knowing what happens after responding officers leave a scene. They aren’t informed if investigations are opened or whether the police are actually trying to resolve ongoing problems, they said.

Anjenita Davis, who lives in the 11th District, said there’s a house near her where drug activity “is being carried out” and “where shootings have taken place.”

Davis said she there simply isn’t a consistent enough police presence on that block to put pressure on those responsible for making the area a crime hot spot, and she doesn’t know who to talk to about it.

Officer McBeth suggested Davis go to the 11th District station and ask to speak directly to the building officer.

McBeth said residents should attend their district’s monthly beat meetings to voice these concerns and get information about how to share the problems they see.

Another common theme at Thursday night’s virtual meeting was officers’ interaction with young people. Residents largely agreed that police are viewed negatively by youth, and officers need to work to be seen in a positive and approachable way.

Jones said in her experience, school principals often “already [have] like 500 things on their plate.” They aren’t always the best facilitators of relationships between students and outside organizations like ACT or the police.

The most success has come when police work directly with a teacher’s class to engage students one on one.

“I think the key to it is building those foundational relationships,” she said.

She said officers jumping into a Zoom class just to say hi to students and being cordial and friendly with them “would be great.”

At the end of Thursday’s meeting, a representative from each group offered their insights on how policing could be improved in Austin.

Jamikka Nelson, representing breakout room three, said her table concluded that officers need to do more to get to know the community and build relationships with citizens who aren’t committing crimes.

She said part of the problem is “a lot of the officers in the 15th District don’t stay.” The community doesn’t get a chance to build any relationships, or trust, with the officers.

Officer Stafford Wilson said the “15th District is involved in a DCO program.” The goal is to develop those deeper relationships with the community, Wilson said.

The 15th District coordinating officer program was launched in November 2019, said DCO Michelle Molina. Training for more DCOs is currently wrapping up, and more information will become available in the near future, she said.

At the time, then-Commander Yolanda Talley told the Austin Weekly, she viewed the program as “the resident having a personal police officer.”

The second community input meeting will be held over Zoom Nov. 10, from 6 to 9 p.m.