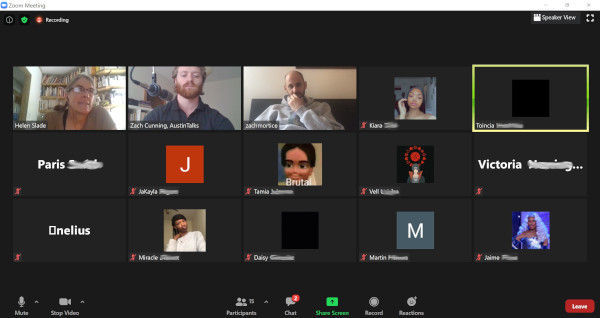 Over the summer a group of young people gathered over Zoom to develop a quality-of-life plan for Austin’s youth.

The project was organized by Territory, an organization that focuses on “youth empowerment, building of community and teamwork,” said Helen Slade, the group’s executive director. All their projects are completely youth led.

For this summer’s project, 11 young people between the ages of 16 and 21 came together and proposed the idea of making a youth version of Austin’s quality-of-life plan, said Isobel Araujo, the project’s facilitator.

Using the plan developed by Austin Coming Together as a framework, Araujo asked the group to identify the topics they wanted to focus on.

They initially identified youth empowerment and public safety as their main concerns. Through conversations, the group “sort of teased out mental health as an additional topic that they wanted to dive deeper into that wasn’t originally mapped out in the original quality-of-life plan,” Araujo said.

ACT was the lead agency in the development of the five-year plan, which was facilitated by Local Initiatives Support Corp. and released in 2018.

It focuses on seven issue areas, including mental health and youth empowerment, and lays out a plan for addressing these issues and affecting systemic change in Austin, according to ACT’s website.

JaKayla R. and Vell U. said the community has to work toward public safety on their own.

We have to “stop the gun violence or what it is that, you know, causing all of this violence in our community instead of trying to contact the police, because we know they won’t do it,” JaKayla said.

Kiara D. said in light of this summer’s unrest, having a heavy police presence in Austin makes it feel like the police are waiting around for something to happen, “so that they have an excuse to be violent towards members of the community.”

She feels like the police aren’t seeking to help the community with its problems.

Vell said they had filled the section with facts and statistics about mental health, as well as personal stories from team members about their struggles and experiences with mental health.

Part of their goal was to correct people’s misconceptions about mental health and what it means, and to give them a resource to learn more, he said.

The team also conducted survey research, including questions about what people already knew, how respondents felt mental health struggles affected the community and ideas for improving mental health in schools.

For Jaime F., empowerment came down to being able to have a voice, even when he comes up against adults who think that just because he’s a kid his opinion doesn’t matter.

“I’m not going to let them silence me,” he said.

“When I think of empowering yourself … I kind of think about, just having confidence, mental confidence, just to do anything,” Paris S. said.

Their team is expecting to publicly release the youth QLP in November or December, to coincide with the annual meeting Austin Coming Together holds each year, Slade said.