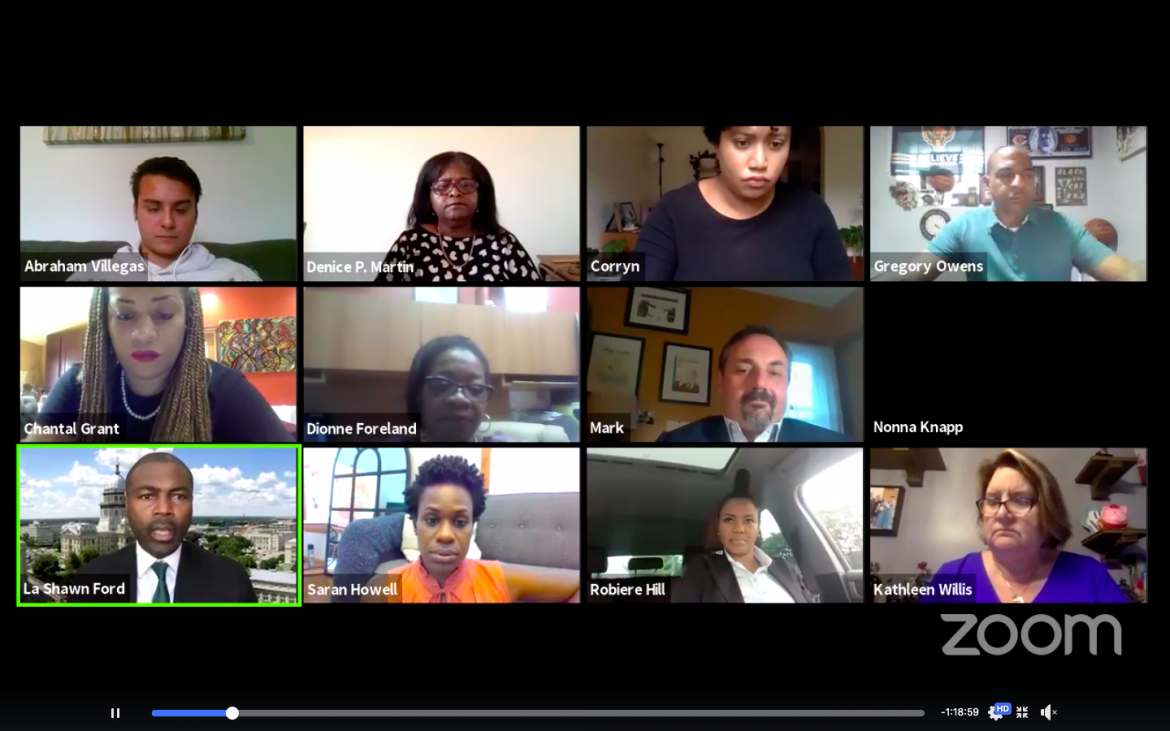 Saran Howell – one of hundreds of applicants vying for 75 pot dispensary store licenses being doled out by the state – didn’t make it to the next round, and she’s not happy about that.

Howell, her husband, her sister and her sister’s wife had hoped to be named a finalist for the lottery, the next step in awarding the so-called “social equity” licenses. Howell was one of several unsuccessful applicants who voiced concerns last week about the way Illinois officials are awarding the coveted licenses.

“Let me first congratulate the 21 finalists because I’m sure they had great applications,” Howell said Wednesday during a Zoom press conference. “But we are a social equity, minority, women-owned organization that also put in a comprehensive application. Like all of the social equity applicants here, we put in countless hours all while working full-time jobs.”

One of Howell’s business partners, Robiere Hill, also questioned why their application didn’t make the cut.

Also at the press conference were Reps. La Shawn Ford and Kathleen Willis, who sent a letter last week to Gov. J.B. Pritzker after the 21 “social equity” finalists were named.

The letter questions why there was a no-bid contract with KPMG, which rated more than 4,000 dispensary site applications; whether the firm has any financial conflicts; and if the state has considered halting the licensing process.

“We cannot let our very people who spent their life savings or investment money that they could’ve invested in something more possible to achieve than a lottery that was probably not attainable in the first place,” Ford said. “We ask the governor to please have a real due process for people so that they don’t have to go to court to spend money.”

Willis said she wants Illinois to be at the forefront of social equity in the recreational weed world. That means prioritizing Black and brown communities who have been most hurt by drugs, she said.

Illinois dispensary owners – some of whom have made it to the final round for the 75 licenses – are largely white and male, the Chicago Tribune reported.

Another losing applicant, Forty Acres and Mule’s Gregory Owens, said he hopes the legislature revisits the law. “I’m hoping that there is an opportunity to make a change in legislation for the lottery. I would love to see the winning applications for comparison.”

Reps. Ford and Willis said they’re working on a “trailer bill” to introduce during the Illinois General Assembly’s fall veto session in November that will reflect the many concerns would-be pot shop operators have raised.

The governor’s office didn’t respond to a request for comment Friday.

Sunday morning, the lawmakers held a press conference via Facebook Live to talk about developments in a pending federal lawsuit filed over the state’s cannabis program.

The federal lawsuit was filed against the Illinois Department of Financial and Professional Regulation, which regulates cannabis dispensaries, and Bret Bender, deputy director of the department’s cannabis control division.

The suit alleges the agency’s decision to move forward on a lottery to award licenses without giving the “unsuccessful applicants any opportunity to challenge their ineligibility is unconstitutional and cannot be permitted.”