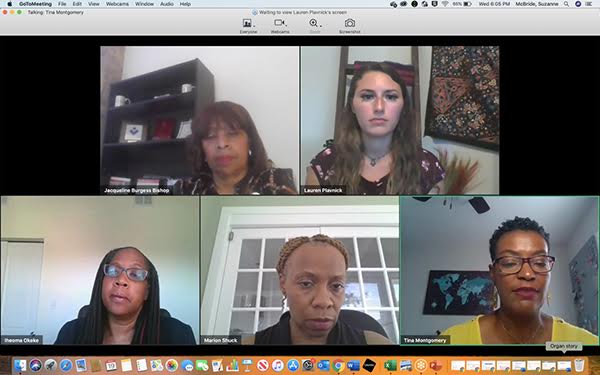 Representatives from the the Gift of Hope Organ & Tissue Donor Network and the National Kidney Foundation of Illinois talked about the importance of organ donation at a webinar earlier this month.

A few weeks ago, a young woman died at The Loretto Hospital. Her family, after talking to representatives from the Gift of Hope Organ & Tissue Donor Network, decided to donate her organs.

One of the hospital’s nurses wanted to witness the process – vascular surgeons from Ohio had traveled to Chicago to retrieve the heart. The nurse wanted to share with the woman’s family the “wonderful thing they did,” Loretto President and CEO George Miller Jr. recounted recently.

Not every family responds that way, though the demand for organs is great, especially among people of color.

“We need more donors, especially African Americans, to participate,” Miller said during a webinar to encourage people to become organ and tissue donors. “We have to change the mindset” about being a donor, he added.

Changing that mindset is key and can happen if people talk openly about being a donor, said Marion Shuck, director of family services and community outreach at Gift of Hope.

Nationwide, there are 100,000 people waiting for an organ donation, and over 80 percent of those are waiting for a kidney, Shuck said.

Because African Americans are disproportionately affected by kidney disease, far more Blacks are on the transplant list. In fact, minorities make up 65 percent of people waiting for a kidney.

Shuck knows how hard it is for a family to make that decision. Her husband suffered a fatal heart attack while riding his bike and became a tissue donor.

She shares her story because “I am able to use my personal shared experience on the importance of organ and tissue donation … to help families begin the conversation.

Just one organ donor can have a sweeping impact on far more than the person who receives a heart or kidney.

Before moving to Chicago, Miller’s pastor in Texas needed a transplant. Born with degenerative heart disease, the 6-foot-5 minister received a new heart from another large man, a truck driver who died in an auto accident. “He was the perfect size.”

The pastor invited the donor’s family to the church, “and I’m telling you there wasn’t a dry eye in that place. … this family got to see what donating a heart did” for so many others, Miller said.

He won’t forget “the relief in their eyes as they saw what their gift – and it is a gift – of hope and healing did to that church.”

Monica Freeman-Young’s husband collapsed at home on Valentine’s Day night 2016, then was on life support for three days at the University of Chicago.

After doctors told her he was brain dead – he had suffered a cerebral hemorrhage – she met with Gift of Hope representatives, who asked her what she thought about organ donation. Her husband’s driver license indicated  he was willing to donate his organs.

“The only good thing that I was experiencing these three days was if his dying could help save someone else’s life, then some joy could come from somewhere,” Freeman-Young said.

Two people received his organs, and later, both wrote letters to her. “They shared their stories, their appreciation.”

“Yes, my heart hurts and yes, I still miss him. But just knowing that there are two people walking around who are able to enjoy life – and God said it wasn’t their time – that’s the greatest feeling.”

Gift of Hope attended her husband’s homegoing at the couple’s predominantly African American church, which has over 20,000 members, and they were able to help spread the word about organ donation, especially the need for people of color to donate.

“One day you are going to die, and have you given this any thought?” Freeman-Young asked.

Miller adds: “We’re all given the sentence of death at some time, but we can live on.”